Accessibility links
TNT's 'Franklin And Bash' Reaffirms Television's Faith In Legal Whimsy TNT is bringing a new lawyer show, Franklin & Bash, to television. Like many lawyer shows, it is convinced that what judges and juries are really looking for from attorneys is wacky, wacky behavior. 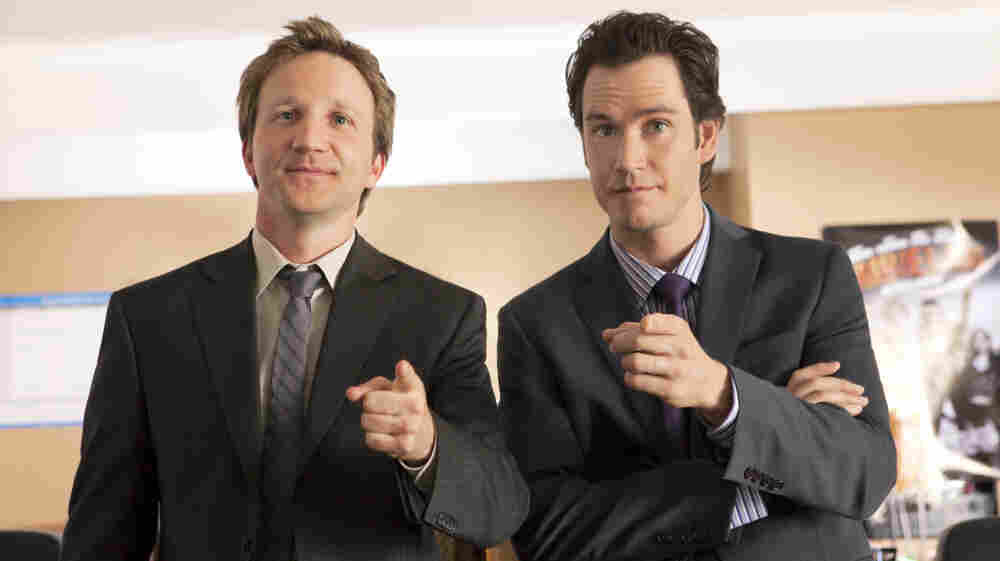 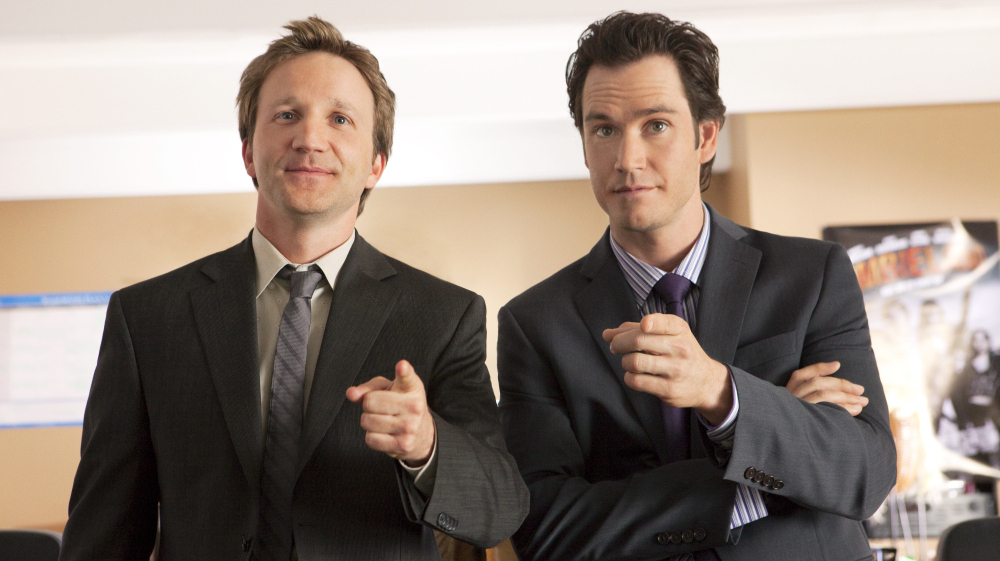 I'm not going to lie to you: I haven't watched TNT's Franklin & Bash, which premieres Wednesday night on TNT. If you want an actual review, there are a few kicking around. I'm more interested, as a recovering attorney, in the general progress of lawyer shows and what the odds are that they have finally come up with a lawyer show that accurately reflects real life. Let us investigate the evidence as it currently exists.

In case you haven't seen the trailers, Franklin & Bash follows two keeeee-razy ambulance-chasing lawyers as they are adopted by a big stodgy law firm. How unprofessional and underqualified are they? They're so underqualified that when a real law firm guy says he wants to hire them, Franklin (or maybe it's Bash) says, "As attorneys?" Ha ha! My, yes, nothing flatters an expensive law firm that constantly needs to persuade new clients to remain tightly in the grasp of its pricey fingers quite like hiring the totally incompetent. So that's our first lesson: Clients who are looking for attorneys are always happy to see a few dingbats rattling around the hallways yelling and knocking things over. It's confidence-inspiring! "Turn over your thousands and thousands of dollars," it says. "We are here to make you feel comfortable."

What else do Franklin and Bash bring to the table? Well, the previews suggest that this lawyer show, like many before it, is out to stress one of the least-known aspects of the American judicial system: its unquenchable thirst for whimsy. Bash (or maybe it's Franklin) makes out with his client on the stand! Of course, the other lawyer objects, but by then, he's already making out with his client! His point is made! The defense rests! Or possibly the plaintiff! Who really cares? The cause of justice is advanced, that's the point.

Similarly, what judge wouldn't be secretly charmed by a witness doing a strip tease on the stand? "That's just what my courtroom needs," I can just imagine the judge saying in a gentle, amused voice. "I don't like it when court gets all serious." Sure, I was once in court with an attorney whose cell phone rang in the middle of an argument, and I'm pretty sure there was actually a bolt of lightning that came out of the judge's eyeballs, went directly to the guy's pocket, disabled his cell phone, burned the words "FOR WANT OF BEING PLACED ON VIBRATE" into his thigh, and then set his underwear on fire, but judges may have changed since then to the point where all they're really looking for is to be entertained. Yeah, they might boot you out of the courtroom for show, but they'll forget all about it by the next day. They love bras, just like everybody, right?

See, as the trailer explains, the fellas don't take themselves seriously, but they take their cases seriously. That will work really well, because heaven knows that driving the judge to the point where she's looking with distaste at Fratty McChipster like he just offered her a plate of spoiled fish couldn't possibly negatively affect the clients. Judges don't hold it against you! They secretly wish everyone's client would strip! They only wish every case contained more shenanigans, so it would take longer and require more paperwork! Judges love your case! They never want it to end!

And that's not to even mention how overdue a dose of sexually harassing your clients is in this crazy, mixed-up, politically correct world. What woman wouldn't want her attorney to unzip her top for her while explaining that it will make her win? That's gotta be worth a lot of referrals, because the women in the world of F&B just love that.

Fortunately, if any sticks in the mud do object to the wacky, wacky world of Franklin and Bash, they have a perfect plan: JUST SAY YOU'RE DRUNK. How did I not think of that? You know, the first time I ever appeared in court, I had prepared and prepared and prepared, but the judge was so mad at the other lawyer by the time I stood up — and had made it so clear that I was already going to win — that he leaned over the bench, looked down at me, and said menacingly, "Did you have anything you wanted to add?" I argued — with eloquence that defied my lack of experience, I think — thusly: "No."

Why, oh why, didn't I say, "Nooooo, smoochyface, didja want an appletini, WOOOOOOOOOO!"? That would have been great. As a matter of fact, when I returned to the office, I said it had been a little strange, and I had this discussion with one of the women attorneys: "Did you stand up?" "Yes." "Did you throw up?" "No." "That's a perfectly good first court appearance." Little did I know she was chastising me for not being drunk. WOOOOO!

Lest you think I am misunderstanding by taking all of this as actual advice to attorneys, I want to stress: I am not. The creators of the show are emphatic about the fact that they "want to tether all this stuff to good lawyering." That's right! This is good lawyering! The stripping! The drinking in court! When they look at what they have wrought here, they think to themselves, "That is some goooooood lawyering."