Accessibility links
Women Latest Target Of Bahrain Crackdown In the wake of massive protests, the government has cracked down brutally on opposition figures. Authorities detained thousands of men — and then went after the women. "They took me from my work," one woman says. "And from the beginning they slapped me on my face, on my head, shoulder." 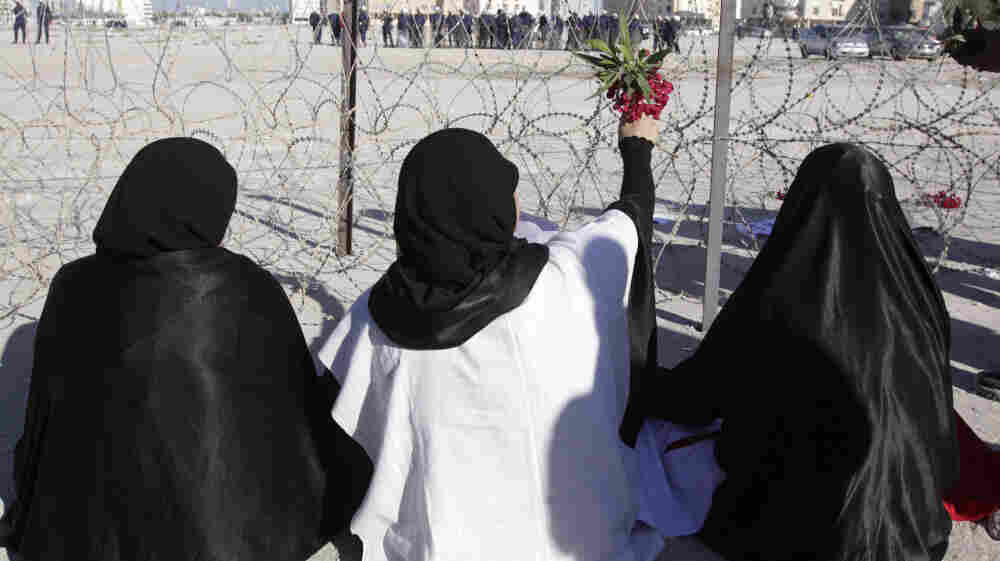 Bahraini protesters hold up flowers toward riot police near the Pearl Roundabout in February. On March 18, the government demolished the monument, which had become a prominent gathering place for opposition protesters. Hasan Jamali/AP hide caption 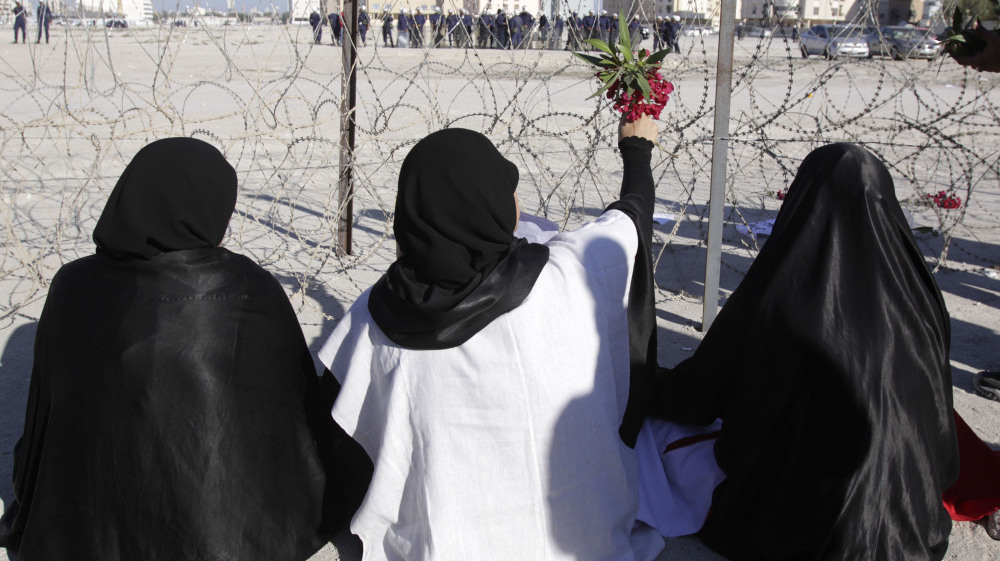 Bahraini protesters hold up flowers toward riot police near the Pearl Roundabout in February. On March 18, the government demolished the monument, which had become a prominent gathering place for opposition protesters.

For the past 2 1/2 months, Bahrain's government has cracked down brutally on opposition figures who led massive anti-government protests in February and March. Doctors, journalists, human rights workers and even elected officials have been detained and beaten.

The government's most recent targets are women.

"They took me from my work," one woman says. "And from the beginning, they slapped me on my face, on my head, shoulder."

The woman agreed to be recorded in an interview with NPR only if she could whisper, in English, so that authorities wouldn't recognize her voice.

She had been detained, beaten, then let go. When she met with NPR, she was limping from pain.

Symbol Of Uprising Is Destroyed In Bahrain

Bahrain Crackdown Puts Pressure On U.S. Diplomacy May 21, 2011
Activists In Bahrain Lay Low After Crackdown May 31, 2011

The crackdown began in mid-March, after hundreds of thousands of Bahrainis had occupied the Pearl Roundabout, marked by a white monument that looked like elongated fingers stretching a precious jewel toward the sky.

The government says the protesters were engaged in a violent plot to overthrow the state. Protesters were dispersed, and the monument was flattened.

Authorities detained thousands of men who were known to oppose the government — and then went after the women.

The woman who spoke to NPR says she was taken by bus to a police station, blindfolded, and made to stand for five hours in a room. She was accused of working to bring down the Bahraini regime.

"They tried to force me to confess that I told people at my work to be against the regime," she says.

Authorities showed the woman a picture of someone protesting at Pearl Roundabout. At the time, Bahrain's crown prince said it was legal to protest. Now, authorities say it's a crime.

"They tried to force me to confess that a picture in a protest — that it is my picture. And it was really not my picture," the woman says.

She was taunted about one of her relatives, who has been jailed without charge for many weeks. "They said very bad things about him," she says. "And they told me that, 'Do you think he will come out of the jail? He will die in jail.'"

They told me if I didn't confess they will let men come and — continue with me. They told me that.

A Bahraini woman detained by the government

But perhaps the worst part of the ordeal was that the woman was detained at all. In an Arab culture, particularly in the Gulf, detaining a woman is the ultimate humiliation, going back to the days when the way one tribe defeated another was to capture and rape its women.

"They told me if I didn't confess they will let men come and — continue with me," the woman says. "They told me that."

She says she understood what they meant — the men would do bad things to her. When asked if she was told that the men would rape her, she says, "No, they didn't say — but to beat ... strong and [hard]."

When asked if she ever felt like she was in danger of something worse, like some kind of sexual attack, she replies, "Maybe, yes. Maybe."

There is much, much more to this woman's story — details that simply cannot be divulged at this time. One of her relatives is still in jail, and she is terrified for her children.

Analysts in the region say this is the first time in the wave of protests sweeping the Arab world that large groups of women have been targeted for going against the government.

Bahraini human rights groups say hundreds of women have been detained in recent weeks. Most were released. Dozens are still being held. One female journalist reportedly was beaten so badly she can't walk. Authorities have vowed to investigate.

In her whole life, the whispering woman says, she has never been treated like this. No one has ever raised a finger to her, she says, or said a single unkind word.

If they apologize for this, she says, maybe Bahrain can go forward again. But if they don't, she says, we will live with this shame forever. And that shame might eventually turn into revenge.