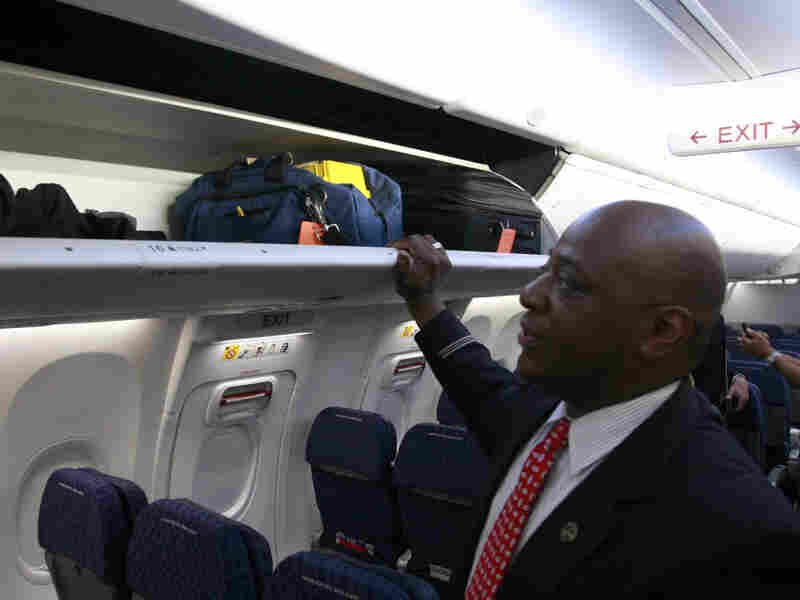 A flight attendant prepares to close a luggage bin on the redesigned 737. Thanks to the bin's new pivoting motion, passengers in the aisle seat will have more headroom. American Airlines hide caption 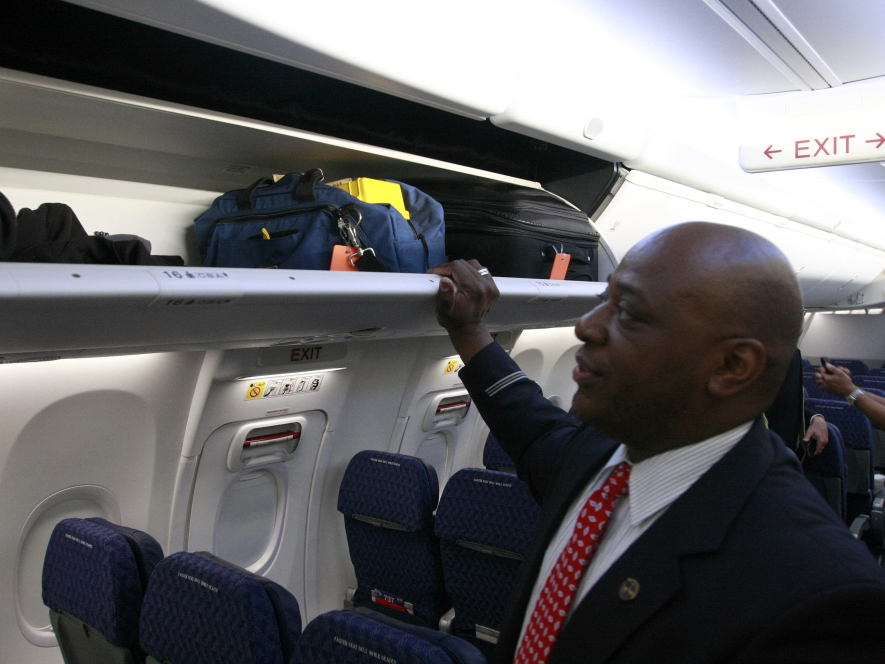 A flight attendant prepares to close a luggage bin on the redesigned 737. Thanks to the bin's new pivoting motion, passengers in the aisle seat will have more headroom.

American Airlines just took delivery of its first Boeing 737-800, a passenger plane with an option list that includes LED lighting that can be tuned to the time of day (or night), more headroom, larger storage bins and a futuristic feel.

On a reporter's recent visit to the Boeing factory in Renton, Wash., outside Seattle, a row of 737s stood nose to tail. If you think the glory days of American manufacturing are but a memory, consider this: From start to finish, it takes 10,000 mechanics and engineers 11 days to build a new 737.

Kent Craver, a psychologist and regional director of customer satisfaction for Boeing, says that until now, engineers and decorators approached airplane interiors like they were a room — a long, tubular, claustrophobic room.

The old goal, he says, was simple: "You make it comfy, cozy, cavelike."

But, Craver says, that was the wrong approach. Instead of trying to decorate a fluorescent tube like it was some perverse living room, with LED lighting and softer, rounder walls, designers made the cabin a canvas, like a planetarium.

So on an overnight flight, to wake passengers in the morning, instead of harsh fluorescent light, the cabin can begin a soft dark orange, slowly warm to yellow, then a bright light blue. At night, the cabin can mimic the dark blues and purples of dusk. The idea is that the cabin's lights can make the trip nicer, not soul-crushing. 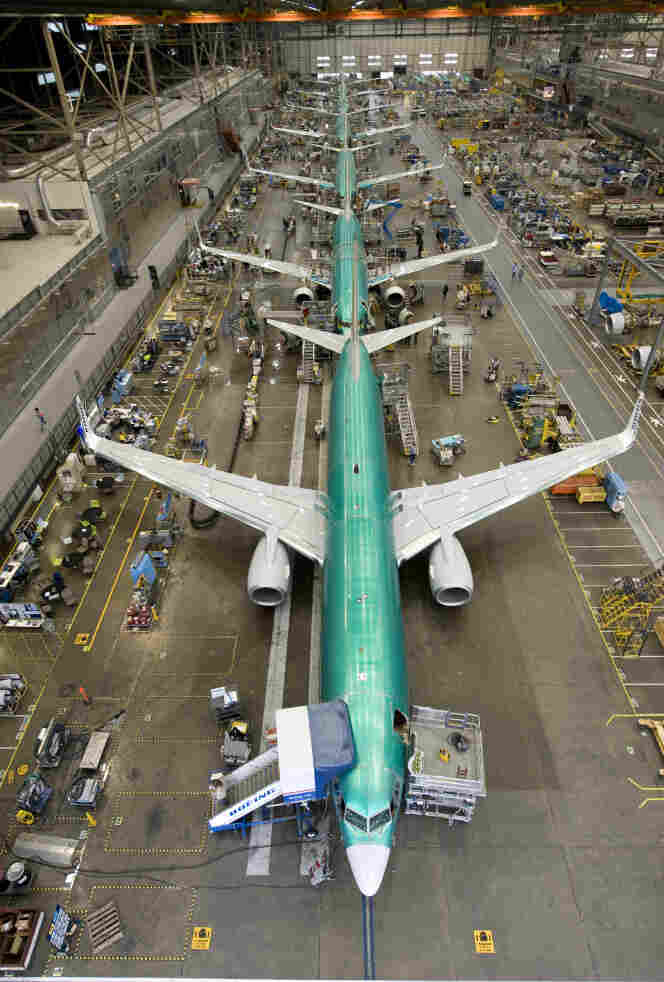 A row of 737's being fitted with the new interior at Boeing's Renton, Wash., factory. Jim Coley/Boeing hide caption 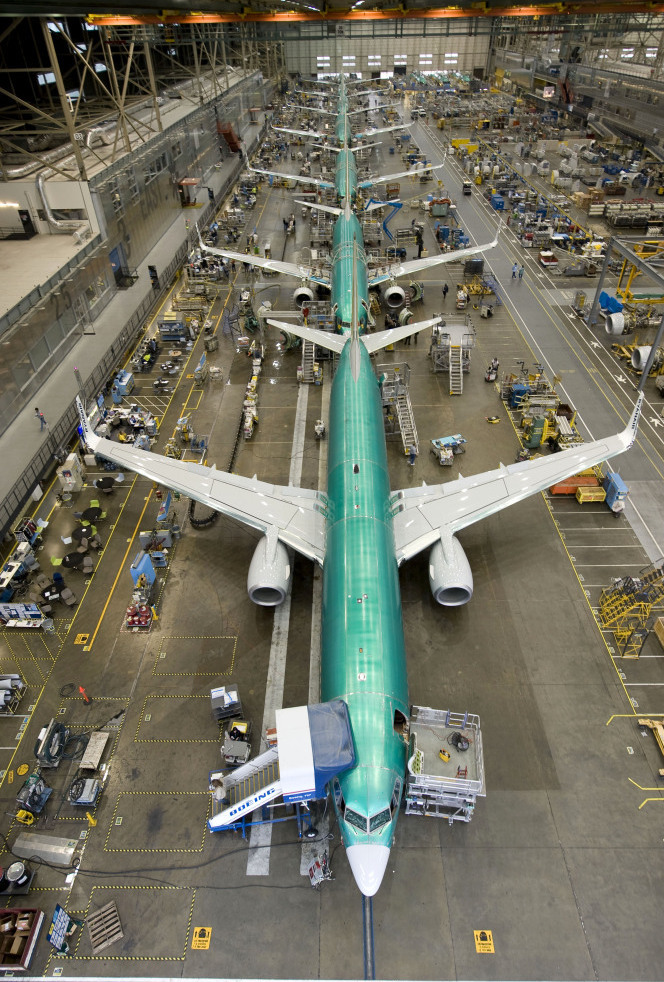 A row of 737's being fitted with the new interior at Boeing's Renton, Wash., factory.

"We're using the lighting as part of the architectural design," Craver says. "It's creating a scene."

An important part of the new interior is the luggage bins. Instead of the traditional shelf bins with doors that close from above, the cabin has pivot bins that partially retract into the ceiling.

A passenger in the aisle seat is able to stand straight up, not forced to lean into the aisle. The bins have hydraulic assists to help them close, and they're also bigger, holding four suitcases instead of three — 48 more bags than standard bins.

"The bins and the ceiling and those sections are the same height as they are on the airplane today," Craver says "We've simply redesigned the way those pieces interact."

Boeing Field is where customers take delivery of their airplanes. As 36 people mill around American Airlines' gleaming silver 737, about 30 Chinese customers are right next door, excitedly snapping pictures of Hainan Airlines' beautiful white 737-800.

There's a lot of laughing going on. Picking up a plane is fun — and they all have that new airplane smell. Capt. Jim Kaiser sticks his head in the door. "Who's got the key to the airplane?" he asks.

After a couple of speeches, some photographs, and a ribbon-cutting, they're off to the Dallas-Fort Worth hub, with LED interior lights bathing the cabin in blue and white.

Just how big a deal this new interior will be to jaded frequent fliers is unknown. Waiting for a taxi outside Terminal C at Dallas/Fort Worth International Airport, Seth Jenson says that he has heard all about the new interior but hasn't seen it yet. Jenson is a restaurant consultant who flies on American all the time.

"I like that there's more overhead space," he says. "I'm 6 feet 4 inches and I'm constantly ducking and weaving through as I'm boarding." 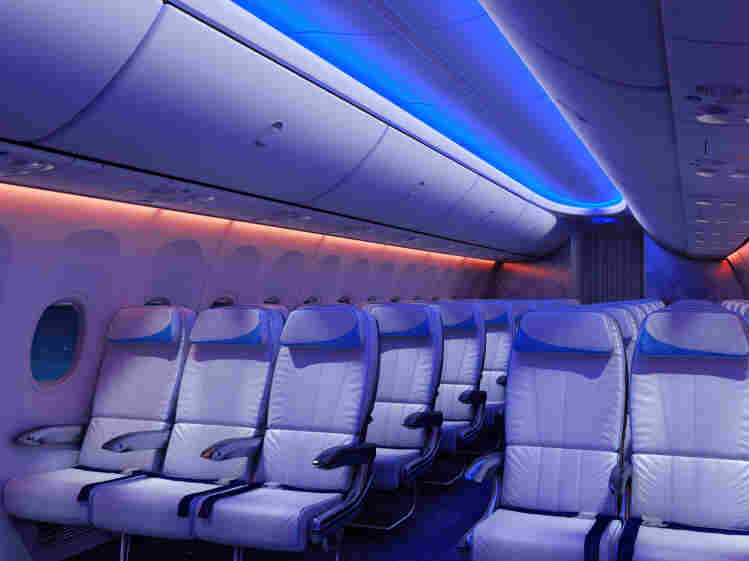 The new "Sky Interior" of the Boeing 737 features LED adjustable lights that can mimic conditions outside the plane. Boeing hide caption 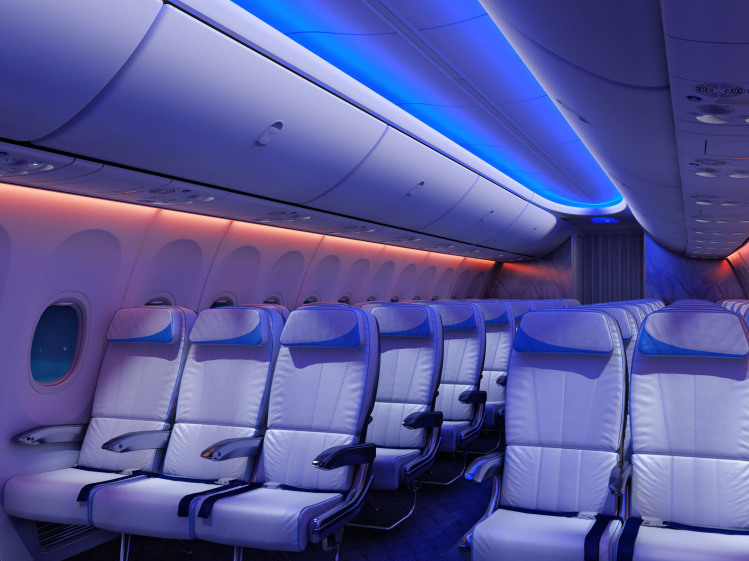 The new "Sky Interior" of the Boeing 737 features LED adjustable lights that can mimic conditions outside the plane.

But Jenson also flies Southwest Airlines a lot. And he says it has a better level of customer service. Jenson says he's all for American's new 737s, but that the airline has other problems to address as well.

"It just seems that the American employees — whether it's your gate personnel or your ticket takers — it just seems like they stretch their employees thinner to make their bottom line," he says. "And I recognize that we need to invest in new planes. But I also know that it's still a service-based industry."

Boeing says that 80 percent of its orders for the new 737 have opted for the new Boeing Sky Interior. American Airlines has 53 more of the planes coming.