Accessibility links
'The End Of Anger' In The Black Middle Class In 1994, Ellis Cose surveyed successful, middle-class African-Americans and uncovered an often unspoken rage. Now, 17 years later, he's discovered a major change in that community: They've become one of the most optimistic groups in America. He reveals his findings in The End Of Anger. 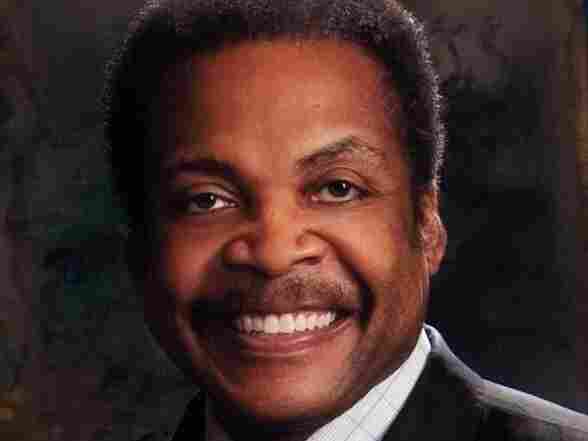 In The Rage Of A Privileged Class, Ellis Cose told the stories of frustrated black professionals. Steven Kramer/ hide caption 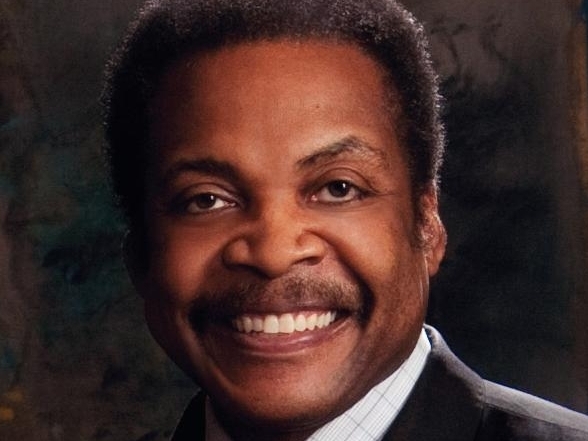 In The Rage Of A Privileged Class, Ellis Cose told the stories of frustrated black professionals.

In 1994, Ellis Cose surveyed successful, middle-class African-Americans and uncovered an often unspoken rage. He described his findings in the book The Rage Of A Privileged Class.

Now, 17 years later, Cose has discovered a major change among middle-class blacks: They have become one of the most optimistic groups in America. He reveals his findings in a new book, The End Of Anger.

Cose tells NPR's Neal Conan that the rise in optimism is not linked to perceived end of discrimination.

"No one black who I talked to thinks we have arrived at a point where we are an equal opportunity nation," Cose says.

Cose conducted two large surveys — one of black Harvard M.B.A.'s and one of graduates of A Better Chance, a program that sends kids to prep schools. He says he learned that for well-educated and well-prepared African-Americans, "the sky is the limit."

Cose found that a generation after The Rage Of A Privileged Class, middle-class African-Americans are finding themselves with opportunities that didn't exist before. 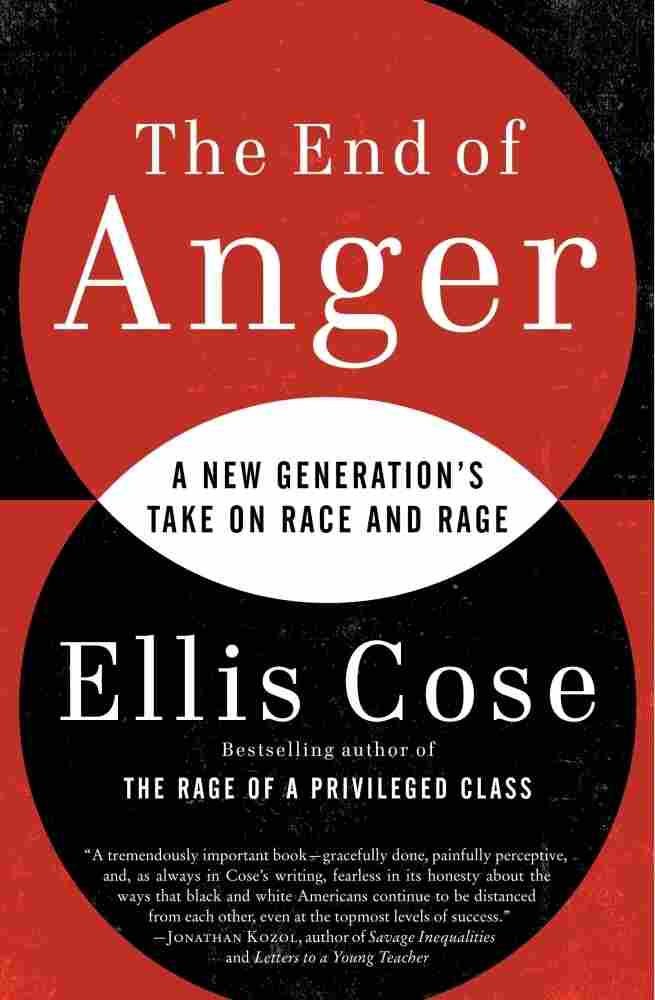 The End Of Anger: A New Generation's Take On Race And Rage
By Ellis Cose
Hardcover, 320 pages
Ecco
List Price: $24.99

"And this is something that is fundamentally different about the way people — particularly people of color — are viewing the American experience," he says.

According to Cose, it was once axiomatic for African-American parents to warn their children that they'd have to work twice as hard to get half as far as their white counterparts. But these days, the conventional wisdom has changed.

"Some of those kids are indeed going to get as far as anybody," Cose says.

Cose refers to the post-Jim Crow generation as "The Believers," a group that never experienced a time when African-Americans couldn't get into top-ranked universities or work at large corporations. Instead, they saw African-Americans rise to top positions in both industry and government.

Because of that, Cose says, the Believers have largely concluded that the old ways don't apply to them; that they can succeed no matter what color skin they have. He says in many ways, African-Americans today have more faith in this country than their white counterparts.

In one survey, Cose asked participants about discrimination in the workplace. He says, "Around 90 percent said there was some kind of glass ceiling in the corporate workplace."

But when participants were specifically asked about glass ceilings at their workplace, the results were quite different — only half said they saw a glass ceiling in effect.

In another workplace survey, many young African-Americans said they felt they were treated the same as their similarly credentialed white peers.

"People were not saying discrimination has disappeared," Cose says. Instead, he says, the message was that "the kind of discrimination that made it impossible to aspire to rise to a certain level is nowhere anywhere near as heavy as it used to be."

The result is that a young black Harvard M.B.A. can actually reach for the stars. There may still be discrimination, but if you successfully navigate around trouble, you can still achieve your goals.

Excerpt: 'The End Of Anger'

The End Of Anger: A New Generation's Take On Race And Rage
By Ellis Cose
Hardcover, 320 pages
Ecco
List Price: $24.99

For centuries, black Americans lied to white Americans. It was a matter of simple survival. Slaves did not speak in anger to their masters. Yes, America saw slave rebellions — the most famous was led by Nat Turner in Southampton, Virginia, in 1831. But rage was generally held deep within. So most whites, during the years of slavery and for decades thereafter, believed that blacks were content. "They tell us in these eager days that life was joyous to the black slave," wrote W. E. B. DuBois in The Souls of Black Folk, published in 1903. But the truth, said DuBois, could be found in the "Sorrow Songs," the Negro spirituals: "They are the music of an unhappy people, of the children of disappointment; they tell of death and suffering and unvoiced longing toward a truer world."

Blacks could not forever hide their anger in spirituals and whispered resentment. In 1940, as the war against fascism in Europe threatened to engulf America, Richard Wright published Native Son, the story of a black man, Bigger Thomas, who is filled with rancor and rage. After World War II, as black Americans increasingly equated Jim Crow with Nazism and black soldiers who had fought for whites' freedom abroad were humiliated at home, black anger spilled fully out into the open. Ever since then, whenever African Americans have spoken in public about our experience in this country, anger has been a recurrent and dominant theme.

"There are ... as many ways of coping ... as there are black men in the world, but no black man can hope ever to be entirely liberated from this internal warfare — rage, dissembling, and contempt having inevitably accompanied his first realization of the power of white men," wrote James Baldwin in "Stranger in the Village" in 1953. He returned to the theme in 1955 in Notes of a Native Son. "There is not a Negro alive who does not have this rage in his blood — one has the choice, merely, of living with it consciously or surrendering to it," he wrote.

Black Americans are no longer fuming — or at least, not anything like we once were. The angry black man — Bigger Thomas and his ilk — has become marginalized, irrelevant, passe. In this era, public anger (fringe kooks notwithstanding) rarely has an explicitly racial edge. We are witnessing, in short, a fundamental shift in the nature of the black-white relationship in America, undergirded by a major evolution in some core American assumptions. As white racism has become unacceptable, unremitting black anger has become inappropriate — a huge change from where things stood only a generation or two ago.

Fifteen or twenty years ago, I think our own ambivalence and anger — built-up rage — really was more prominent than it is now. I think we're at a place where those of us who are positioned. . . to make change and acquire wealth, to a certain extent — there's no time for it. We are working so hard to take advantage of the window of opportunity [created by] being in this culture where we have Obama in place.

In Black Rage (1968), psychiatrists William H. Grier and Price M. Cobbs argued that anger was a natural and pervasive reaction to the condition of blacks in America. "Aggression leaps from wounds inflicted and ambitions spiked," they wrote in their book, published just four months after Martin Luther King's assassination.

It grows out of oppression and capricious cruelty. ... People bear all they can and, if required, bear even more. But if they are black in present-day American society they have been asked to shoulder too much. They have had all they can stand. They will be harried no more. Turning from their tormentors, they are filled with rage ... We believe that the black masses will rise with a simple and eloquent demand to which new leaders must give tongue. They will say to America simply: GET OFF OUR BACKS!

In December 1993, Colin Ferguson emptied two clips from a semiautomatic pistol into commuters on a Long Island Railroad train — killing six people and injuring nineteen others. Notes found in his pocket explained his action as a result of the rage he felt as a black man. A month or so later, I returned from an overseas trip to scores of phone calls from reporters seeking my comments on the bloodbath. To my astonishment, they informed me that Ferguson's attorney, William Kunstler, had cited me as an authority on his "black rage defense" and urged them to call me. My credential was having recently published The Rage of a Privileged Class. The book had nothing to do with demented gunmen, but it did speak to an anger — rooted in racial slights, lack of respect, and generally shabby treatment — that was rarely voiced but often felt by middle-class black Americans. 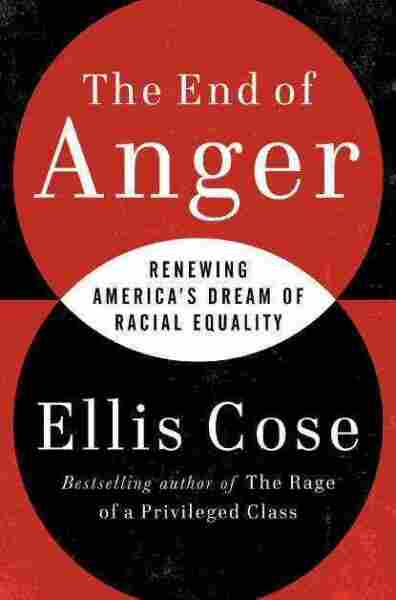 The End of Anger

A New Generation's Take on Race and Rage