Accessibility links
For Chileans, Allende's Exhumation Raises The Past The remains of Salvador Allende were recently exhumed to discover whether the former president committed suicide — or was assassinated — in a 1973 coup. Some Chileans don't see the point of investigating his death. Others say it's important to allow the country to move forward. 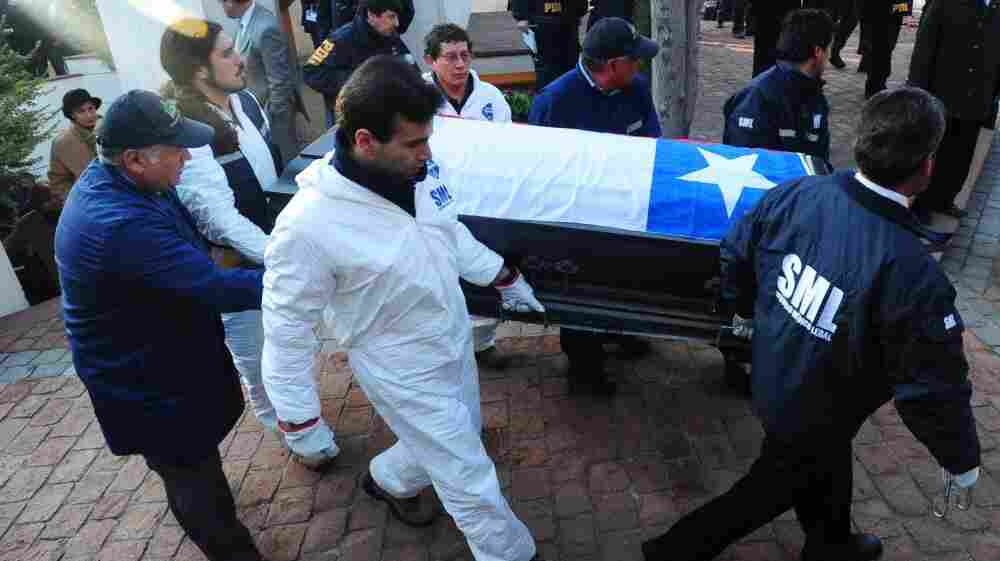 Forensic personnel transport the coffin with the remains of former Chilean President Salvador Allende at the General Cemetery in Santiago on May 23. Claudio Santana /AFP/Getty Images hide caption 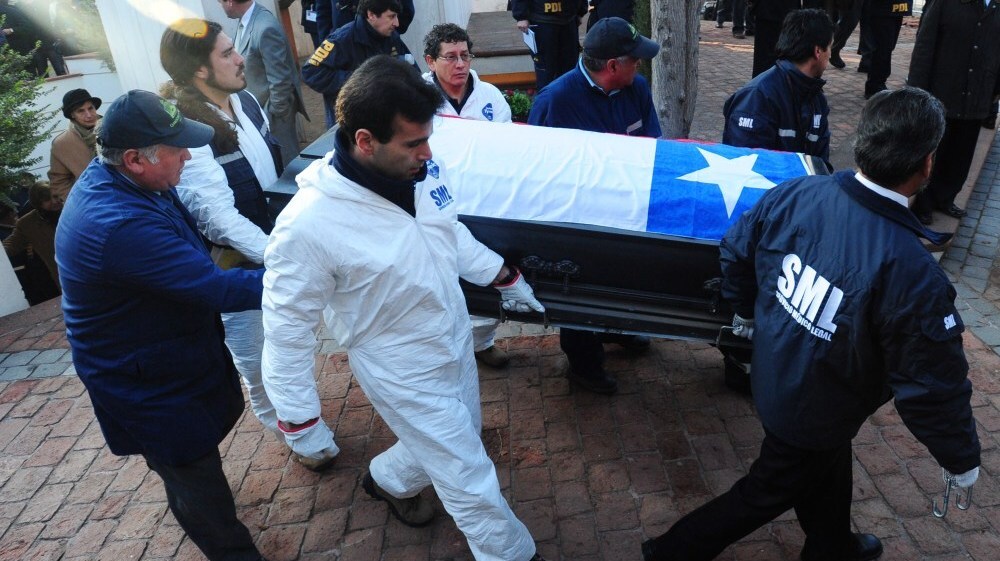 Forensic personnel transport the coffin with the remains of former Chilean President Salvador Allende at the General Cemetery in Santiago on May 23.

When Gen. Augusto Pinochet waged a military coup against President Salvador Allende, it was the start of nearly two decades of government repression in Chile. Thousands of people were disappeared, tortured and killed. As for Allende, he did not leave the presidential palace alive.

He was officially said to have committed suicide during the coup. His body, however, was recently exhumed, and while his family and many others still insist he committed suicide, an investigation has opened up the possibility that he may have been assassinated.

More On The Coup 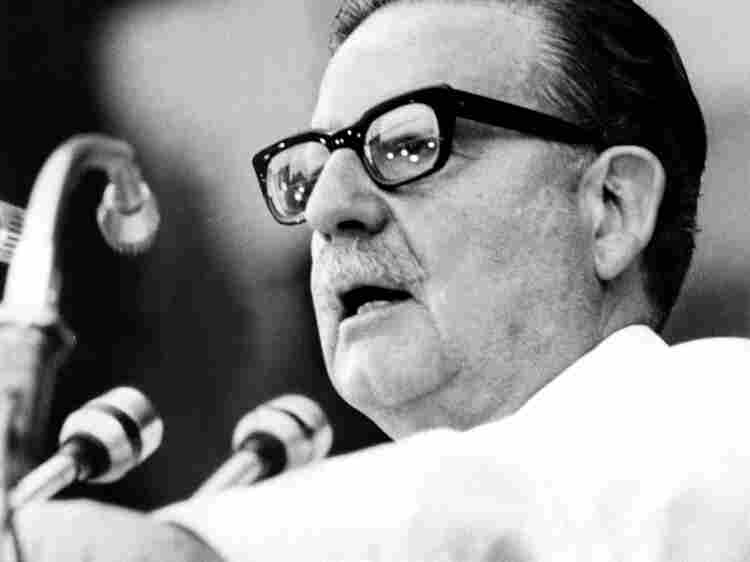 Salvador Allende served in Chile's Senate from 1945 until he was elected president in 1970. In that election, Allende represented the leftist Unidad Popular coalition.

After a rise in inflation and other economic problems in the country, military officers demanded his resignation. On Sept. 11, 1973, the Chilean Air Force bombed the presidential palace, and the military junta seized power.

The coup was led by Augusto Pinochet, who had been appointed commander in chief of the military by Allende, and was backed by the U.S. government as part of Operation Condor. The investigation currently under way aims to settle the question of whether Allende committed suicide during the coup or was assassinated.

After assuming power, Pinochet dissolved Congress, enacted strict censorship rules and banned political parties. Approximately 30,000 Chileans were imprisoned or tortured and more than 3,000 killed or disappeared by his regime. He stepped down from his role as president in 1990.

Allende gave his last speech on Sept. 11, 1973, via radio. Soon after, planes bombed the presidential palace in Santiago. It was the start of the military coup that ousted the democratically elected Allende.

"I will not resign," he said. "Placed in a historic moment of change, I will pay with my life for the loyalty of the people."

At the time, the autopsy and eyewitness accounts determined that soon after delivering his final remarks, Allende shot himself in the head with an AK-47. But forensic expert Luis Ravanal has been studying the autopsy for four years, and he believes otherwise.

Ravanal says he found details in the autopsy that weren't in line with the official version of Allende's death. The cranium, he says, shows evidence of a first shot with a small gun, like a pistol, and then, a second shot from a larger weapon — like an AK-47 — which could mean that Allende was shot and killed, then shot a second time with his own gun, to make it look like suicide.

The investigation into the possibility of an assassination could take up to three months, and some Chileans don't see the point of it. Rolf Luders, who was minister of finance under Pinochet, says he hardly ever thinks about that time now and doubts anyone else does either.

"Well, a lot of time has passed and most people probably don't even recall what happened at the time," Luders says. "I think most people have forgotten the subject."

But many Chileans say they haven't. In a cramped, smoky empanada shop in downtown Santiago that doubles as a sort of social club, a group of men talk about the coup and the investigation.

"I really didn't know what it was like during the coup," says 28-year-old Diego Cummings, "but I think that all of this has to do with knowledge that we have to acquire as a nation. And having clarity is important if you want to know the truth." 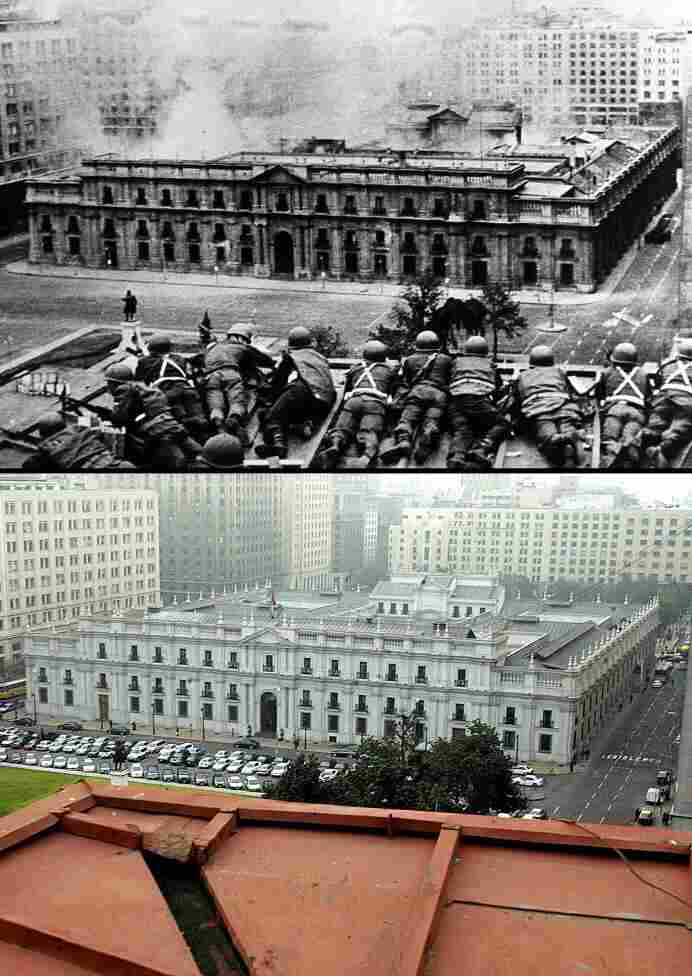 Above, Chilean troops fire on the presidential palace in Santiago during a coup led by Gen. Augusto Pinochet against President Salvador Allende. Below, the same place almost 30 years later. AFP/Getty Images hide caption 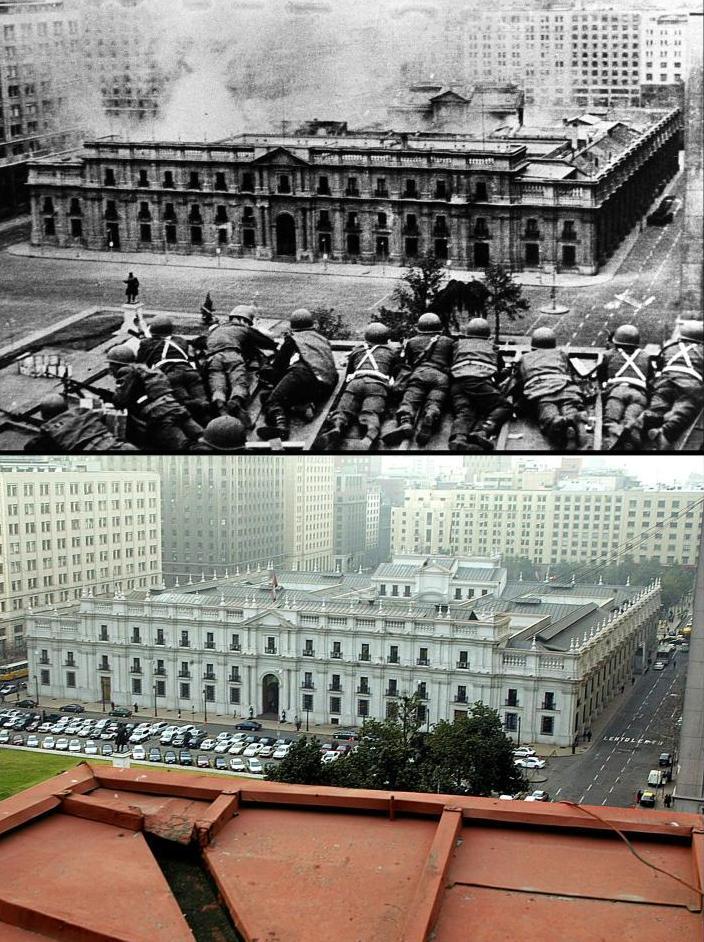 Above, Chilean troops fire on the presidential palace in Santiago during a coup led by Gen. Augusto Pinochet against President Salvador Allende. Below, the same place almost 30 years later.

Poet Jorge Montealegre was imprisoned and tortured during the coup. He believes the investigation is important. But he says whether or not Allende killed himself won't change how he's remembered.

"Look, it's the same to me," Montealegre says. "It won't take away or add heroism or martyrdom; nothing can change the dignity with which Allende died. His death in the presidential palace made him bigger, to everyone. The example he set has marked us."

Montealegre says the real question is what will happen now for the thousands of people who still don't know what became of their loved ones during the dictatorship.

"That day was, without a doubt, a rupture in people's biographies. I think that the investigation is a way to begin to finish writing the story of all these memories," he says. "By establishing the facts, you're also able to create a sort of peace for those who are able to know the truth and to see justice."

Montealegre hopes that once the real cause of Allende's death is established, a similar process will be carried out for the Chileans who disappeared during the dictatorship, and whose stories still remain incomplete. Only then, he says, can Chile truly move forward.

"People like to talk about two demons, as if this all happened between two groups of extremists, and society had nothing to do with it," Montealegre says. "And that's an illusion, because the coup touched all of Chilean society. In that moment, the center was destroyed, and we all became involved in one way or another."