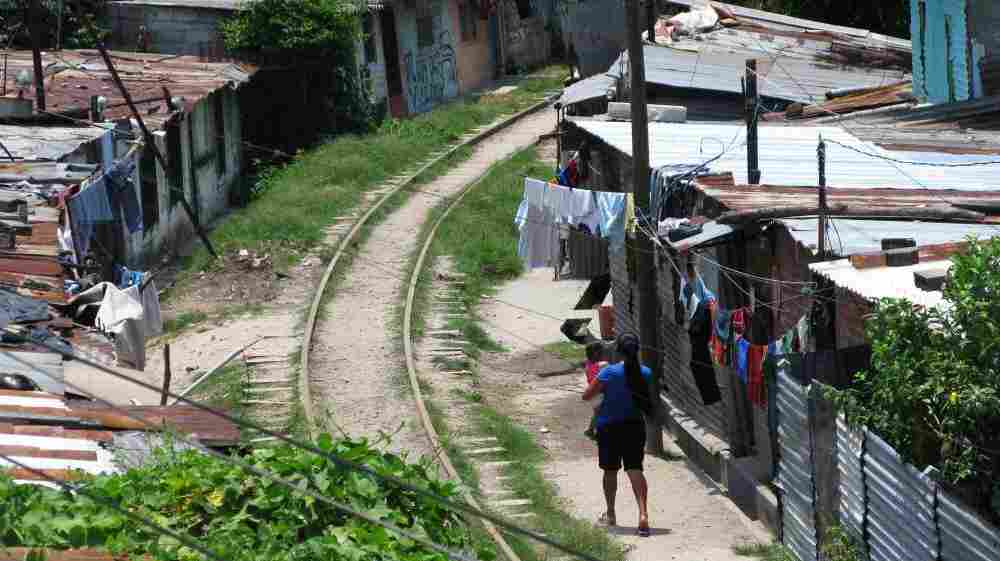 Barrio La Victoria Ciudad Delgado in San Salvador, El Salvador, is controlled by the Mara Salvatrucha gang. A gang leader says he sees the group as a social organization — one that provides services, like water, and protects "civilians." Jason Beaubien/NPR hide caption

Last of a three-part series. Read Part 1 and Part 2.

The drug war in Mexico is having ramifications throughout the hemisphere, as Mexican cartels seek new markets and smuggling routes for their products.

As the Mexican government has attacked the cartels, several of them have been moving into Central America, where security forces are ill-equipped to confront them. The migration of the cartels into Honduras, Guatemala and El Salvador has given the region the highest homicide rate in the hemisphere.

In El Salvador, there's fear that the Mexican cartels are aligning themselves with the country's ubiquitous street gangs.

El Salvador has had a gang problem for quite some time. The two main gangs — the 18th Street and the Mara Salvatrucha, or MS — are so powerful and so volatile that their members get sent to separate prisons. Impoverished neighborhoods in the capital, San Salvador, are clearly divided as belonging either to the MS or to the 18th Street. 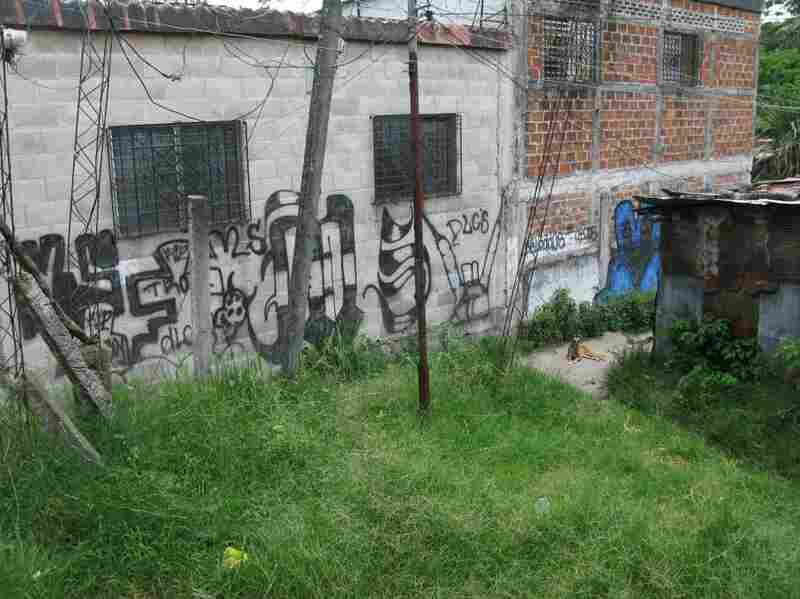 "Selling drugs is for the benefit of everyone," says a leader of the Mara Salvatrucha, or MS, gang in San Salvador's La Victoria neighborhood. "If someone sells drugs, it's because of all the needs of everyone in the community. There are colleagues who don't have a mother or anything, and only the gang helps them — no one else." Jason Beaubien/NPR hide caption 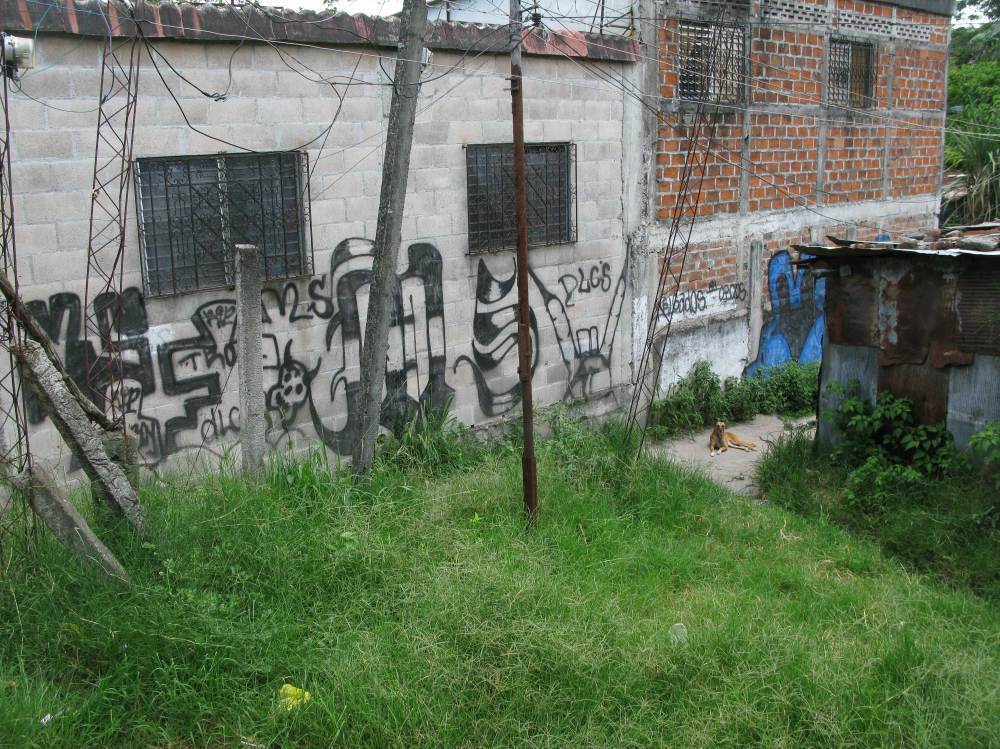 "Selling drugs is for the benefit of everyone," says a leader of the Mara Salvatrucha, or MS, gang in San Salvador's La Victoria neighborhood. "If someone sells drugs, it's because of all the needs of everyone in the community. There are colleagues who don't have a mother or anything, and only the gang helps them — no one else."

The gang members control street-level drug sales, charge local residents for security and battle to keep their rivals out.

Luis Alberto Espinoza Aranda is a 23-year-old gang member in San Salvador. Tattoos on his shoulders reading "18" make his allegiance clear. "It's a tough life," he says. "You suffer a lot of discrimination from the authorities and ordinary people."

Espinoza joined the 18th Street gang five years ago, along with his two brothers. Just as Espinoza was completing a one-year prison term for murder, his younger brother was sent away for drug trafficking.

"It's a world where, like in prison, the authorities and everyone treats you like you don't have a right to anything just for the fact that you're a gang member," Espinoza says.

He says the Mexican cartels have been moving aggressively into El Salvador over the past couple of years, and that they mainly try to hire gang members to transport drugs.

"This is the riskiest thing — to move the drugs," he says. "Selling it doesn't pose that much risk. You're just in one place. But when you're moving it around in the streets, this is when you're going to clash with the police or the soldiers."

Espinoza, like many gang members, also has a regular job — he and his mother sell tostadas from a stand in the street. He'd like to get out of the gang life, he says, but that's a difficult thing to do. The 18th Street gang doesn't allow its members to leave.

The Mexican drug cartels control roughly 90 percent of the cocaine flowing from South America into the U.S., according to a 2010 State Department report. Much of that cocaine comes through Central America. As the Mexicans move south, it's led to huge cartel massacres in Guatemala, a skyrocketing murder rate in Honduras and more drugs on the street in El Salvador.

Howard Augusto Cotto, the deputy director for investigation with the Salvadoran National Civilian Police, says there have been some large-scale seizures of drugs recently in El Salvador. But, he says, there have been no firefights between the security forces and Mexican narcos like those that have unfolded, for instance, in neighboring Guatemala.

"The Mexican cartels are not paying with money; no, they're paying with drugs," Cotto says. "A lot of people are talking about if the maras, the gangs here, are involved with criminal organizations in Mexico. I don't think that in this moment that relationship is high or is strong, but we are very concerned about that."

The police commissioner points out that the Salvadoran gangs and the Mexican cartels are very different organizations. The Mexican cartels have relatively vertical structures focused on criminally lucrative activities. The maras have horizontal structures, and offer security to their members and a way to make some money.

The maras could offer — and according to some security analysts, already are offering — the Mexican cartels access to a vast criminal network. The maras have stashes of weapons, established communications networks and ruthless foot soldiers who have no qualms about smuggling drugs or assassinating rivals — for a price.

Both the 18th Street gang and the Mara Salvatrucha originated on the streets of Los Angeles several decades ago. Their presence grew in El Salvador as members were deported from California. U.S. officials warn that an alliance between the Salvadoran gangs and the Mexicans could pose a great danger because the Salvadorans already control street-level drug distribution in some American cities.

'Selling Drugs Is For The Benefit Of Everyone'

Usiel Pena, a sociologist in San Salvador, is standing on a dirt path amid shacks made of cinder blocks and metal sheeting in the barrio La Victoria, which is controlled by the Mara Salvatrucha, or MS.

Pena was a soldier with the leftist FMLN rebels during El Salvador's civil war. As a guerrilla, he was based in this crowded neighborhood. He says the MS now controls this area the same way the FMLN did in the 1980s.

"It's the same web, the same structure as when the guerrillas were here. It's the same neighborhood, the same little old grandmother who prays for them," he says with a laugh.

The smoke from cooking fires wafts through the air, as does the pungent smell of marijuana. Outhouses serve as toilets.

The second in command of the MS in La Victoria is a 33-year-old who only wants to give his nickname, "Blue."

The head of the MS here, "Triste," is laying low after a couple of people were gunned down in the barrio the night before. Blue says the MS only sells drugs to outsiders, except marijuana, which is permitted by the gang.

"Selling drugs is for the benefit of everyone," he says. "If someone sells drugs it's because of all the needs of everyone in the community. There are colleagues who don't have a mother or anything, and only the gang helps them — no one else."

With his shirt covering his tattoos, Blue looks more like an evangelical preacher than a leader in one of the most feared gangs in the hemisphere. He's wearing a short-sleeved beige button-down shirt and black slacks. His hair is neatly parted and swept across his brow. Only his missing right arm, which got blown off by a hand grenade, hints at his violent career.

Blue talks of the MS as a social organization that protects the "civilians" in the neighborhood. They help get water lines connected. They're refurbishing the community hall. To him, it's normal that residents have to pay rent to the gang for these services.

His clique of the MS doesn't yet work with the Mexican cartels, but he says it would if the conditions were right. Roughly half the members of the MS in El Salvador are in prison, and Blue says it's nearly impossible for them to find work when they get out.

"There are a lot of my colleagues who want to learn something, have something, function in a different way without bothering people constantly with extortion," he says.

But for gang members in El Salvador, Blue says, there are few good options available. And that's why they're quite open to the arrival of the Mexican narcotics cartels.