Accessibility links
Love Triangles And Pyramids: Verdi's 'Aida' The exotic aura of ancient Egypt has been the magic ingredient in all kinds of entertainment, from movies to pop songs. But when it comes to evoking the land of pyramids and pharaohs, it's tough to top Verdi's wartime romance.

Hear An Introduction To 'Aida'

From The Maggio Musicale In Florence

Hear An Introduction To 'Aida' 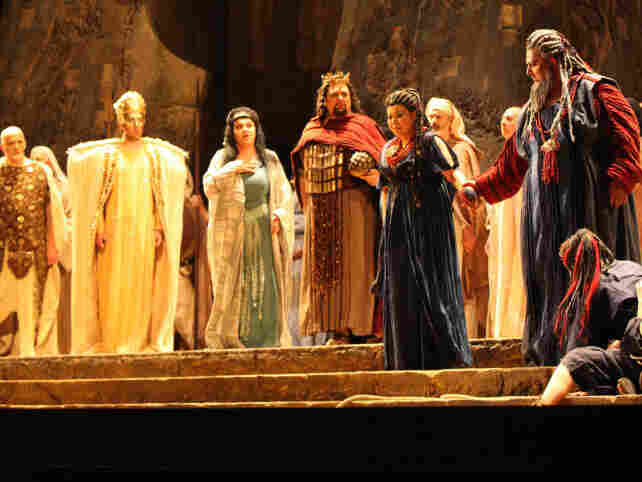 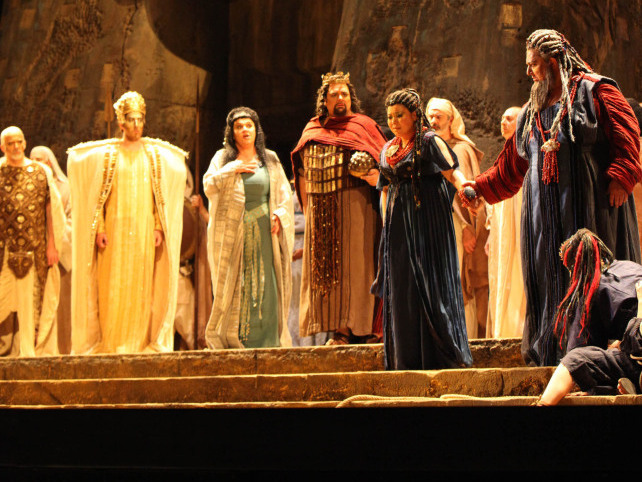 Aida at the Maggio Musicale Festival in Florence.

The exotic aura of ancient Egypt has been the magic ingredient in all kinds of entertainment, and in just about every genre the choices seem to run the gamut.

At the movies, Egypt has been the setting of everything from costume dramas such as Cleopatra to the Biblical epic The Ten Commandments to the adventures of Indiana Jones to various incarnations of The Mummy.

Music inspired by ancient Egypt ranges from Debussy's ethereal ballet score Khamma to "Walk Like an Egyptian" by The Bangles. And that's not to mention a whole string of tunes by a 1980s dance and rap artist billed as The Egyptian Lover or a dreamy number called "Meditation Music of Ancient Egypt," by new age specialist Gerald Jay Markoe.

Early in the third act, as she's waiting to meet with Radames, Aida (soprano Hui He) is afraid she'll never again see her homeland. She expresses those fears in the aria "O Patria Mio."

During their Act Three meeting, Aida and Radames (tenor Marco Berti) imagine a peaceful place where they can be alone together, in the duet "Lá tra le foreste vergini" — "There in the virgin forests."

But when it comes to music evoking the land of pyramids and pharaohs, there's no better place for it than the opera house — especially when you add a dose of passion to the mix. Handel wrote three operas set in Egypt, including Julius Caesar. Massenet chipped in with Thaïs, set in Alexandria. And Giuseppe Verdi did his part with one of the most popular operas of all time, the spectacular drama Aida — a score that was actually written for an Egyptian audience.

The history of Aida goes back to Ismail Pasha, who became the khedive of Egypt in 1863. Among his many dreams for the country was a new Cairo Opera House. It opened in 1869, with a performance of Verdi's Rigoletto. But Pasha thought his theater also deserved a brand new work by Verdi, who was arguably the most famous opera composer in the world.

Verdi wasn't eager to tackle a big new project in a faraway country, and he hesitated. When he eventually agreed, it was on his own terms, and he had plenty of them. Verdi demanded complete control of the production, the right to pick his own librettist and singers, and the right to oversee the project from his home in Italy by sending his personal representative to manage the production, conduct it and direct it. The composer also demanded a hefty fee, payable on delivery of the score. Opera openings were frequently delayed, but there would be no delay with Verdi's paycheck.

The premiere was postponed slightly, thanks in part to the Franco-Prussian War, and took place late in 1871, not quite a year behind schedule. Before long Aida was a hit all over the world. It premiered at La Scala in 1872. The next year, it reached Buenos Aires and New York City.

On World of Opera, host Lisa Simeone brings us a new production of Verdi's blockbuster from the Maggio Musicale in Florence, with Zubin Mehta conducting. Soprano Hui He sings the title role, with tenor Marco Berti as her lover Radames and mezzo-soprano Luciana D'Intino as Aida's bitter rival, Amneris.

The Story Of 'Aida' 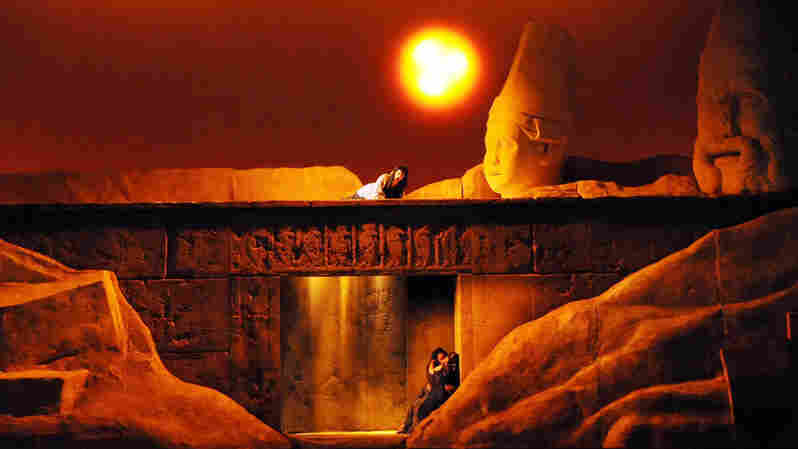 The fates of Aida and Radames are sealed in their tomb, as Amneris sings a prayer from above. Courtesy Maggio Musicale, Florence hide caption

The opera's title character is an Ethiopian slave, held by Princess Amneris in ancient Egypt. Aida is also a princess herself. She's the daughter of Amonasro, the king of Ethiopia.

As ACT ONE begins, the Egyptian high priest Ramfis is conferring with Radames, an army officer. The Ethiopian army is planning to invade, and Radames hopes to command the Egyptian army. That powerful job would also have some personal advantages: Radames is in love with Aida, and if he takes command, he'll be able to free her from slavery. But Amneris is also in love with Radames, and she's suspicious of his feelings for Aida.

Radames is awarded the supreme command, just as he had hoped. But Aida sees trouble ahead and says so in a long solo sequence. She's deeply in love with Radames, but she's also faithful to her country, and to her father. Her scene is one of many in the opera that reveal Verdi's genius for mixing intimate emotions into an opera that's famous for its pomp and spectacle.

The second scene of Act One is an example of that spectacle. It takes place at the temple of Vulcan, where Ramfis blesses the sword of Radames and then leads a huge ceremony, urging the Egyptians on to victory.

ACT TWO begins months later, after Radames and the Egyptians have defeated Ethiopia. As Amneris waits for Radames to return, a chorus of slaves sings about the Egyptian victory. Amneris then confronts Aida. She's still not sure about Aida's true feelings for Radames. So Amneris lies to Aida, telling her that Radames has been killed. Seeing Aida's reaction, Amneris is certain that Aida and Radames are in love. Amneris then admits her trick, revealing that Radames is still alive. But she warns Aida that they are both in love with him, and Amneris has no intention of losing Radames to her own slave.

The spectacular second scene depicts the return of Radames and his army, and features the famous Triumphal March. Ethiopian prisoners are displayed to the crowd, and Aida recognizes her father, Amonasro, among them. But the Egyptians don't realize that Amonasro is actually the Ethiopian king, and he quietly urges Aida not to betray his identity.

Speaking for his fellow prisoners, Amonasro claims the king of Ethiopia was killed, and begs mercy from the Egyptians. Radames urges the king of Egypt to release the prisoners, which he does. Amonasro then rewards Radames with the hand of his daughter, Amneris.

As ACT THREE begins, Aida has made plans to meet with Radames shortly before his wedding to Amneris. But before he arrives, Aida's father urges her to trick her lover, and get him to tell her about the Egyptian plan for invading Ethiopia. At first she refuses, but after Amonasro scolds her for disloyalty, Aida finally agrees. When Radames appears, Amonasro hides to eavesdrop on their conversation.

Aida wants Radames to take her with him as he leads his army to Ethiopia. She knows they can never be together in Egypt. When he agrees, she also gets him to tell her what route his forces will use in their attack. Hearing this, Amonasro comes out from hiding, and identifies himself. Radames realizes that his enemy has heard everything.

But Amneris has also overheard. She accuses Radames of treason, and he turns himself in to soldiers from his own army.

At the start of ACT FOUR, Radames is awaiting judgment. Amneris is still in love with him, and urges him to defend himself. He refuses, believing that if he dies, Aida might be spared. This throws Amneris into a jealous tirade. Still, when the priests condemn Radames to death, Amneris curses them as he's lead away. As his punishment, Radames is to be sealed alive into an underground tomb, beneath a temple, where he'll slowly suffocate and die.

The final scene takes place in that tomb. Radames is waiting for his death when Aida unexpectedly joins him. She hid herself in the tomb before it was sealed, so they could die together, and the two sing their goodbyes. Amneris is above, in the temple, praying for peace as the opera ends.