Accessibility links
Among Pakistanis, Perception Of U.S. Aid Varies A study released this week by the Center for Global Development found widespread Pakistani discontent with U.S. aid. The U.S. has spent more than $20 billion on the country over the past decade, but many Pakistanis fault the pace of the spending while others note that most of the aid goes to the country's military. 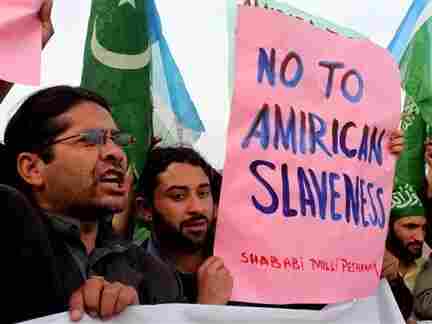 The United States has spent more than $20 billion on Pakistan over the past decade, prompting some Americans to ask what they are getting for the money. America is deeply unpopular in Pakistan, and after the killing of al-Qaida leader Osama bin Laden, Pakistani politicians unleashed a wave of criticism of the United States.

To understand why U.S. aid has not made more friends, NPR went to the gates of Forman Christian College in Lahore, founded for Christian and Muslim students by the Presbyterian Church and in recent years financed in part by the U.S. government.

Because it's a tense moment in Pakistan, it took time to clear security and be allowed on campus. At the college gate, Iman Taha, who wore a half-sleeve shirt and her hair in a ponytail, told a story about one of her classes.

More From Steve Inskeep In Pakistan

"We are discussing the issue of sovereignty of Pakistan: Is Pakistan a sovereign state or not?" she said "And most of us, you know, we believe that we are not sovereign, just because of the interference of the United States in our personal affairs, in our political affairs, in our economy, military, everything."

When asked what she thought of U.S. aid to Pakistan, Taha said: "Aid is not meant to control the people, right? Just give us aid, and don't take anything in return."

The conversation continued in a waiting room, where Taha beckoned passing students into the discussion. We sat in a circle as a ceiling fan stirred the heavy air.

Taseer initially was reluctant to talk, calling his views on the subject "very extreme." But Taha intervened and persuaded him to speak.

Taseer talked about the book Confessions of an Economic Hit Man by author John Perkins, who claimed the U.S. was plotting dominance over other nations.

Hundreds of students on this campus receive scholarships partly financed by the U.S. Agency for International Development. But Taseer says most U.S. aid goes to the Pakistan military.

Aid To Pakistan: Too Much Or Too Little?

How did people come to such wildly different conclusions about American aid to Pakistan?

Some Americans seem to have concluded it's a waste of $20 billion. Yet in Lahore, the Pakistani newspaper editor Najam Sethi suggested to me that Pakistan has hardly received any help at all. "It's peanuts," Sethi said.

The answer lies in the incredible complexity of Pakistan, as well as the complexity of sending aid halfway around the world. Nothing about the story is as simple as it seems.

"I've never seen a single dollar being spent on health or education apart from whatever military aid we're getting," he said.

Not every student in the circle was unhappy. One of them said she's "totally the opposite.

But a study released this week by the Center for Global Development found widespread Pakistani discontent with U.S. aid. It's a tough moment for the U.S. to work on its image, said Mosharraf Zaidi, a Pakistani writer and development consultant.

"There have been events in the relationship that have poisoned the ability of the U.S. government and the State Department in particular to transform this no matter how much money they spend," Zaidi said.

"Ray Davis was a big event. Of course, the bin Laden raid was a huge event," Zaidi said. "And what's happening domestically as a result of those two events, you know, the fallout, is really there's an internal conversation within Pakistan, and that conversation is about whether the people of Pakistan get to decide what's good for them or whether a bunch of generals and a few myopic and venal politicians get to decide what's best for them."

The U.S. says it wants to improve conditions in Pakistan and stabilize it in the long term — whether or not Pakistanis like the U.S.

Under a law known as the Kerry-Lugar bill, the U.S. has committed billions to civilian aid in the coming years. Authorities are planning to pay for electric power generation, schools and sanitation. But when Pakistanis are asked if they're ungrateful, they point out that the spending has begun slowly.

There have been events in the relationship that have poisoned the ability of the U.S. government and the State Department in particular to transform this no matter how much money they spend.

"It may be quicker for us to do it, say, with an American contracting firm, but that will not build the capacity or empower Pakistani organizations to take responsibility for these fundamental concerns," said Andrew Sisson, an official at the U.S. Embassy who wants to train Pakistan's government to complete projects on its own.

Sisson acknowledges that motive — to empower Pakistani organizations — has slowed down the distribution of the Kerry-Lugar money.

"I work with impatient people — both in our country and in Pakistan," he said.

U.S. aid officials are trying to think about developing Pakistan over years, but they are squeezed between American policymakers who want results now, Pakistanis who need results now, and a degree of competition for Pakistan's attention — including from China.

Inside Forman Christian College in Lahore, students played basketball or cricket on a Friday afternoon. One called the U.S. involvement in Pakistan "pathetic." Another said Pakistanis don't like Americans "because the fundamental thinking says that Americans are not in the favor of Pakistan."

One student, Anwar ul-Haq, said there should be contact between the U.S. government and Pakistani people "because Americans are perceived very wrong by the people."

Haq said the U.S. is perceived the wrong way precisely because it is trying to support the Pakistani government, which the people despise.

"We hate our leaders," he said.

Because the Americans are seen as a dominant power, they're blamed for what goes wrong. The U.S. is also blamed for its slow progress, though the students can see some evidence of past American efforts — including the Peter H. Armacost Science Building on campus, which was built with the assistance of the U.S. Agency for International Development.

Although they are frustrated, the students understand their country could use American help.