Accessibility links
May Unemployment Up To 9.1 Percent; Jobs Up 54,000 Employers hired only 54,000 new workers in May, the fewest in eight months, and the unemployment rate rose to 9.1 percent, the Labor Department said. 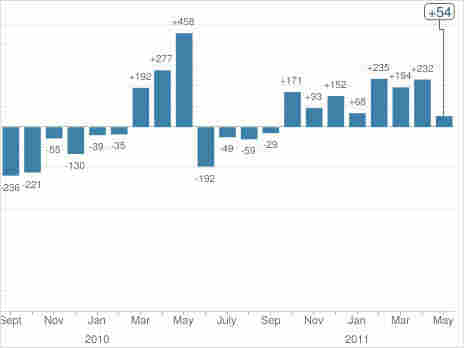 The Labor Department on Friday offered startling evidence that the U.S. economy is slowing, hampered by high gas prices and natural disasters in Japan that have hurt U.S. manufacturers. Employers hired only 54,000 new workers in May, the fewest in eight months, and the unemployment rate rose to 9.1 percent.

The pace of hiring has weakened dramatically from the previous three months, when the economy added an average of 220,000 new jobs. Private companies hired only 83,000 new workers in May — the fewest in nearly a year.

The numbers in Friday's report are "well below the worst expectations of Wall Street," said Hugh Johnson of money manager Hugh Johnson Advisors. "Wall Street had sort of been revising down their expectations and expected an increase of between 100- and 150,000 jobs, but when you only get 54 [thousand], it's a pretty disappointing report."

The key question is whether the meager job gains mark a temporary setback or are evidence of a more chronic problem.

The White House stressed that "overall trajectory of the economy has improved dramatically over the past two years," in a blog post by Austan Goolsbee, chairman of the Council on Economic Advisers.

But, Goolsbee wrote, "While the private sector has added more than 2.1 million jobs over the past 15 months, the unemployment rate is unacceptably high and faster growth is needed to replace the jobs lost in the downturn. ... This report is a reminder of the challenges that remain."

Local governments cut 28,000 jobs last month, the most since November. Nearly 18,000 of those jobs were in education.

Cities and counties have cut jobs for 22 straight months and have shed 446,000 positions since September 2008.

The anemic pace of job creation presents a huge challenge to President Obama's re-election prospects next year. And it followed a string of disappointing economic data in the past month that suggest the economy is hitting a soft patch after a strong start.

"The people who watch these things closely started getting more pessimistic when they saw weakness in the data that came out earlier this week — they saw falling housing prices, manufacturing in a slump, consumers losing confidence. And so they had revised numbers, but not this low," Noguchi said.

The manufacturing sector, a key driver of the economic recovery, grew at its slowest pace in 20 months.

"We're seeing the manufacturing sector of the economy now losing jobs — 5,000 jobs for the month of may — where it'd been gaining jobs of between 20- and 40,000 per month," said Johnson of Hugh Johnson Advisors. "So that was pretty disappointing."

Home prices reached their lowest level since 2002 in March, the higher gas prices have left less money for consumers to spend on other purchases, and average wages aren't even keeping up with inflation.

As a result, consumer spending, which fuels about 70 percent of the economy, is growing sluggishly. But consumer spending is what's needed to drive economic growth, Noguchi said — especially because the government is looking to cut its own spending.

"There's almost certainly going to be less government spending," Noguchi said. And what that means is that the growth is going to have to come organically — you know, from consumers feeling confident and then spending, and then businesses responding to that by hiring to sort of fill the demand."

A Rough Patch, Or Worse?

Economists have said that most of the factors slowing the economy are temporary. But some are now concerned that the impact is greater than they first envisioned.

Steven Wood, chief economist for Insight Economics, said U.S. economic activity has clearly hit "a soft patch." The question is: Are the numbers we're seeing today just a blip, or do they indicate some longer-term drag for employment?

"Some people worry about a possible dip back into recession — what in the past we might've called a double dip or, at this point, a triple dip," Noguchi said. "But a more optimistic view is that this is temporary — a rough patch along the way to a more solid recovery. In addition to higher oil prices, we also had that earthquake in Japan, which is disrupting supply chains for automakers and computer makers. All of that is sort of adding up."

More people entered the work force in May. But most of the new entrants couldn't find work. That pushed the unemployment rate up from 9.0 percent in April. The number of unemployed rose to 13.9 million.

The number of long-term unemployed — people who have been without a job for more than 27 weeks — increased by nearly 400,000. They now make up almost half of those without work.

And the government revised the previous months' job totals to show 39,000 fewer jobs were created in March and April than first thought.

The weakness in hiring was widespread. The 5,000 jobs lost in manufacturing in May marked the first job loss in that sector in seven months. That included a drop of 3,400 jobs in the auto sector.

Car makers are cutting back on production because they are having a difficult time purchasing parts. Many auto parts are manufactured in Japan, and the March 11 earthquake in that country has disrupted supply chains.

Parts of the economy most dependent on consumer spending saw some of the steepest job losses. Retailers cut 8,500 positions, after adding 64,000 in April. And leisure and hospitality, which includes restaurants and hotels, cut 6,000 jobs. That came after they added an average of 43,000 in the previous three months.

There were some bright spots in May. Professional and business services added 44,000 new positions, most of them in accounting, information technology services and management.

Still, the economy needs to generate at least 100,000 jobs each month just to keep up with population growth and prevent the unemployment rate from rising. And economists say the gains need to be at least double that total to drive down the rate.

About 8.5 million Americans worked part time, even though they would have preferred full-time jobs. Another 2.2 million have stopped looking in the past year. All told, the "under-employment" rate was 15.8 percent, down from 15.9 percent the previous month.

NPR's Yuki Noguchi and Sonari Glinton contributed to this report, which contains material from The Associated Press.