Accessibility links
The Root: 9 Things to Know About The Debt Ceiling All this talk about the "debt ceiling" can get a little cumbersome. The Root's Cynthia Gordy has made a helpful list of nine things to know about the federal debt and what it means for you if the jargon has you overwhelmed.

The Root: 9 Things to Know About The Debt Ceiling

The Root: 9 Things to Know About The Debt Ceiling 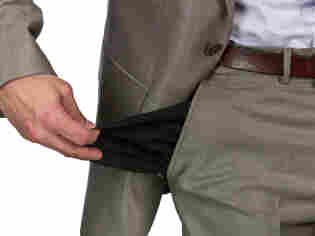 If the debt ceiling isn't raised, the government will default on its debts, which could hit Americans directly in the pocket. iStockphoto.com hide caption

Despite all the hand-wringing over raising the federal debt limit, and the prickly debate between Democrats and Republicans, there's some confusion about what it actually means. A recent Pew Research Center poll found that 48 percent of Americans believe raising the limit would lead to more government spending and higher debt. It's a figure that, according to many experts, reflects public misunderstanding.

"The deficit and the debt have become big issues, and it's largely a proxy for concern with the economy," Andrew Fieldhouse, federal-budget-policy analyst for the Economic Policy Institute, told The Root. "People are under financial strain, so when they see a number like [the debt limit of] $14.3 trillion, they expect the government to act as frugally as they are. But it's a false comparison. We can't choose not to raise it."

So what is the debt ceiling? It's the amount of money, set by Congress, that the federal government can legally borrow in order to pay for its commitments — things like Social Security, Medicare and military operations. Since the end of the Clinton administration, the government has been spending more than it's taken in, so it borrows money by selling U.S. Treasury bonds, notes and T-bills to the public, financial institutions and other countries.

Since the first debt limit was set in 1917, Congress has voted to raise it every time there's been a need. According to the Congressional Research Service (pdf), since March 1962 the debt ceiling has been raised 74 times.

The nation actually hit its current $14.3 trillion debt limit on May 16. Through some finagling, Treasury Secretary Timothy Geithner prevented a default. By suspending payments to federal retirement funds (basically IOUs to be repaid after the debt limit is raised, without affecting federal employees and retirees), he estimates that the government can continue borrowing until Aug. 2.

While both parties agree that the debt ceiling must be raised, Republicans are pledging not to unless significant cuts are made in the federal budget. Meanwhile, President Obama and most Democrats want a clean, no-strings-attached vote. When the House voted on a clean debt-limit increase of $2.4 trillion on Tuesday, the measure failed miserably. Congress and the White House now have roughly eight weeks to negotiate a deal.

What happens next? Why should you care? Here's what's potentially on the line.

1. Raising the debt ceiling does not authorize new federal spending.

There's a fear that if the debt limit is increased, the government will go and spend money on still more programs. Yet only Congress can approve new spending — raising the limit just allows the government to pay its existing commitments. "It would allow the government to continue operating," says Fieldhouse. "It means that Social Security and Medicare benefits that were promised a long time ago will be paid."

2. Not raising the debt ceiling would make the national debt worse.

If the government is unable to borrow and keep paying for its obligations, then the federal debt, and any future borrowing, will accrue higher interest rates. In other words, we would end up owing more money than we would if the issue were confronted by raising the debt ceiling. "You can't wish away the debt of the United States," says Fieldhouse.

3. Defaulting on government loans would affect the global financial system.

Because the United States borrows from the international bond market, and the U.S. Treasury bond is the world's most secure investment, defaulting sets off a disastrous domino effect. "If we move closer to a default, you'll see interest rates rise. Lenders, both domestic and foreign, will become reluctant to lend money to the federal government," says Fieldhouse. "There would be ramifications all over the world in every financial market."

4. A default would hit Americans directly in their pockets.

"The U.S. Treasury bonds serve as a benchmark interest rate for all interest rates in the U.S. economy. When that typically risk-free rate rises, all interest rates go up," explains Fieldhouse. This means that it would become more expensive for consumers to buy a home, purchase a car, borrow for college tuition and hold a credit card. A default would also reduce the value held in 401(k) retirement accounts and pension funds.

Economywide raised interest rates would also make it more costly for entrepreneurs to borrow money to start new businesses and invest in existing enterprises — further diminishing job creation. "It hits jobs in the sense that consumption falls, and business investment falls," says Fieldhouse. "All of the macroeconomic effects of not [raising the debt limit] are terrible for the economic recovery."

6. Without a raise of the debt ceiling, certain things just won't get paid.

"If the U.S. Treasury is out of borrowing authority, as bills come to it, it cannot pay all of them," says Fieldhouse, explaining that there's not enough revenue to repay creditors. Theoretically, Medicare, Social Security, military paychecks, veterans' benefits, unemployment benefits and tax refunds would all be interrupted. "The federal government would cease to function the way it's supposed to in every sense."

Republicans want $2.4 trillion in budget cuts in exchange for raising the debt ceiling. "You can't feasibly cut spending by enough to avoid a debt-ceiling increase, and you can't balance a budget simply by cutting spending," Fieldhouse says of the drastic proposals being pushed, adding that the government will have to raise revenue. But he says that raising the debt ceiling should not be contingent on any long-term deficit plan, no matter the approach. "Congress operates very slowly, and we're in a hyperpolarized period in our politics. You cannot expect Congress to resolve long-term budget problems between now and the beginning of August."

8. The debate boils down to the same old politics ... but this time might be different.

Although Congress has always raised the debt ceiling, these votes are often preceded by a spending debate, with differences depending on who's occupying the White House. As a senator, Obama voted against raising the debt ceiling during the Bush administration, while Republicans were for it. But with a House that includes a significant amount of Tea Party-approved Republican freshmen, an increase can't be taken for granted this time. "They believe they have a mandate to cut spending, and that they're there for one reason only," says Fieldhouse. "They don't seem to grasp the consequences of what they're doing."

9. Congress and the White House don't really have eight weeks to resolve this.

"We're playing with wiggle room right now, but the deadline was already hit [on March 16]," says Fieldhouse, adding that the new Aug. 2 date is just Geithner's best estimate. He also warns that the bond market could get spooked, setting off a financial tailspin, well before then. "If this is a game of chicken being played in front a freight train, you don't want to wait until early August. This needs to be resolved immediately."