Accessibility links
Looking To Win Votes? Change Your (Chinese) Name Some California politicians are making sure the Chinese translations of their names on the ballot mean something positive — and that has at least one state senator steamed. 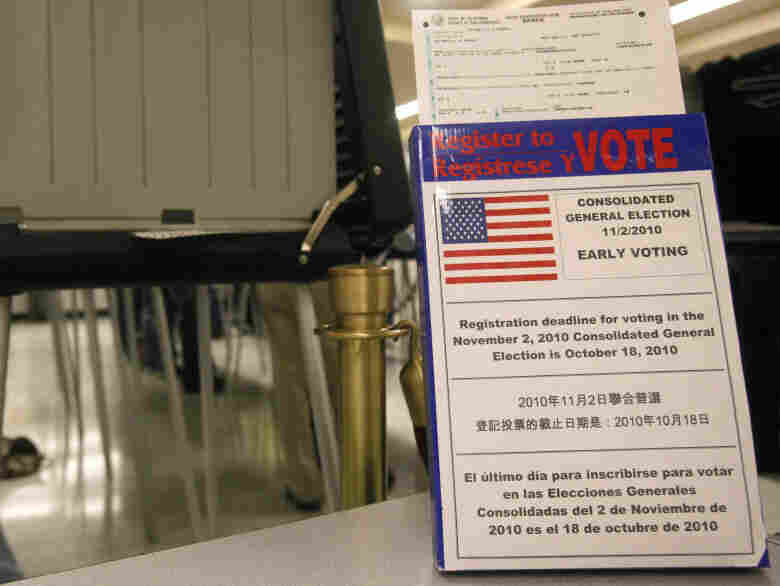 Chinese voters in San Francisco last Election Day saw some enticing names on the ballot. And at least one of those names had been translated on purpose to seem especially enticing. Jeff Chiu/AP hide caption 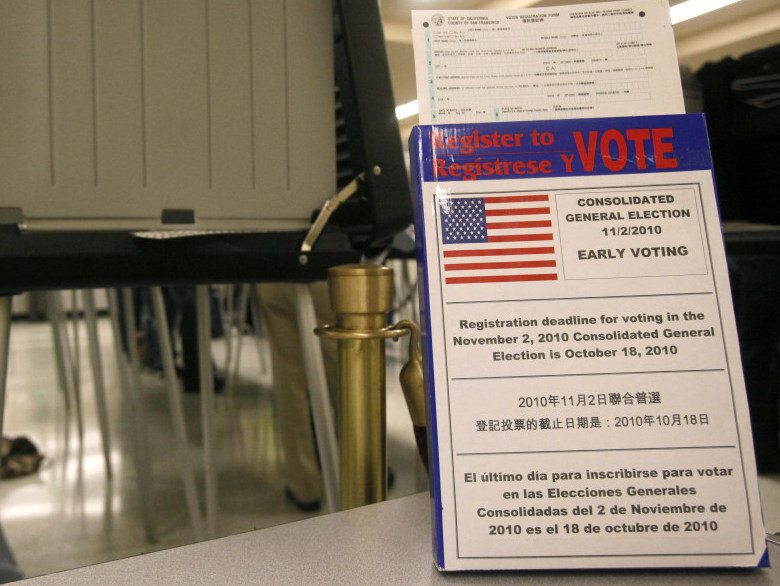 Chinese voters in San Francisco last Election Day saw some enticing names on the ballot. And at least one of those names had been translated on purpose to seem especially enticing.

One of every five residents of San Francisco is Chinese-American. And many don't read English, which means city election ballots have to be translated into Chinese.

That presents an opportunity for the politicians doing the translating.

Take last November's ballot from one if the city's districts. Michael Nava was running for Superior Court Judge; his Chinese name read Li Zheng Ping, which roughly translates as "correct and fair."

But his opponent, Richard Ulmer, translated his last name into Chinese phonetically, as Ao Ma. And what does that mean in English? "Australia horse."

If you're a Chinese voter faced with this choice, it seems like a no-brainer. Who doesn't want a judge who's correct and fair? But there was a bit of a snag.

"The Chinese names that were being used were made up," says Democratic state Sen. Leland Yee, who's proposed legislation that would require phonetic translations.

It turns out other candidates have done the same thing in San Francisco, where Chinese-Americans are the most predominant Asian minority.

About five years ago, Yee started to notice more candidates using certain Chinese characters for their translated names suggesting they were "honest" or "ethical." He sees it as a manipulative tactic to sway Chinese voters based on the positive meaning of the name and not their credentials.

Yee's bill to force candidates to use only phonetic translations has been approved by the state Senate; then-Gov. Arnold Schwarzenegger vetoed a similar bill two years ago.

What's In A Name?

In Chinese culture, creativity in naming is actually encouraged. Parents often choose names for their kids to reflect virtuous qualities.

Yee admits this is true, but he says there's no room for flair in an election where just one character in a name can tell a story about a candidate and could possibly even win votes.

For the record, when you ask Yee about his own Chinese name, he hesitates to distill it down to a simple translation. Yee, who emigrated to America when he was 3 years old, believes the real meaning of a Chinese name is rooted in the historical context of each of the syllables.

The most prominent words that do come forward in his name are "emperor" and "heart," which ends up being a pretty good name to have on a ballot.