Accessibility links
First Listen: Eddie Vedder, 'Ukulele Songs' For his second full-length solo album, Pearl Jam's singer has taken up one of the most useful creative tools available: limitation. It's embodied in a little finger-strummed thing that Vedder picked up during a beer run in Hawaii nearly 15 years ago. 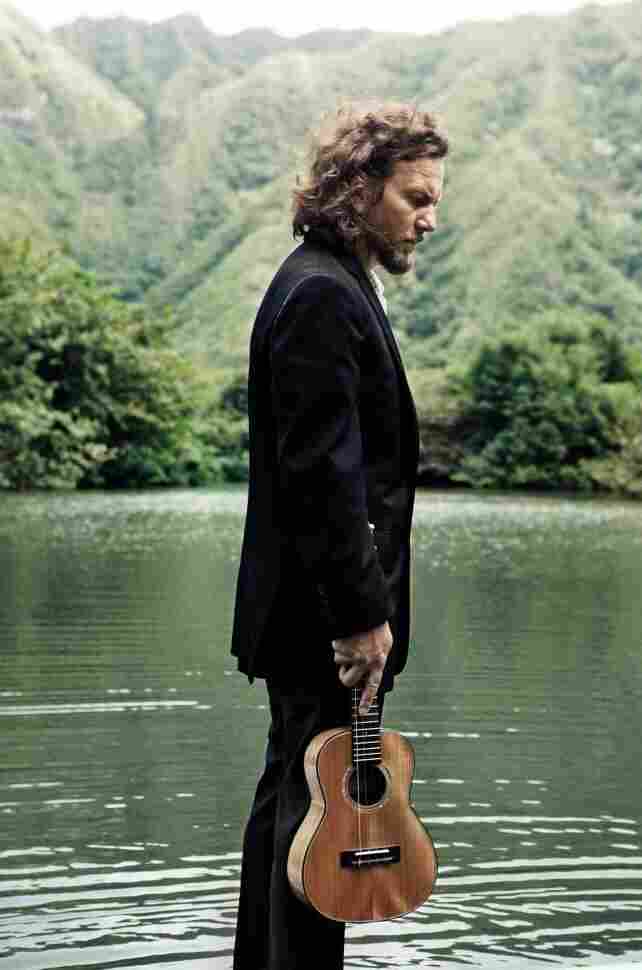 For his second full-length solo album, Eddie Vedder has taken up one of the most useful creative tools available: limitation. It's embodied in a little finger-strummed thing that the Pearl Jam singer picked up during a beer run in Hawaii nearly 15 years ago, an instrument whose limits he never pushes, and which ends up refining and expanding his own range. Ukulele Songs isn't a novelty record; it's a statement of truth. Made calm and open by the ukulele's intimacy, Vedder sounds like someone getting out of his own way and discovering what really matters within his art.

What matters musically, as he's been saying lately in interviews, is melody. The baritone growl that not quite singlehandedly defined millennial American rock transforms here into the lullaby singer's murmur and a romancer's croon. Pearl Jam is a big, noisy band, and in many of its best songs, Vedder has ridden its big waves hard: He's helped many a fan safely unleash un-pretty emotions. Here, though, he asks the listener to pull back with him and pay attention to the tiptoe of his voice as he descends a scale, or the sweetness of slipping into falsetto.

Interview: Eddie Vedder On Giving The Ukulele A Turn In The Spotlight

Vedder's song selections are culled from more than a decade's worth of writing he's done on the uke. A Pearl Jam song, the driving "Can't Keep," opens the set and seems like a form of reassurance — Vedder hasn't gone totally soft, Ten Club members! But the craving for escape that the song expresses here seems like a bit of a fake-out. Everywhere else, from tearjerkers like "Sleeping By Myself" and "Broken Heart" to the more hopeful likes of "Without You" to the vintage crooners' favorites that Vedder covers, Ukulele Songs is about staying still enough to feel something calmly and clearly.

What Vedder feels is the subtly shifting beat of a heart in love. Anyone who wants to read the lyrics here as autobiographical can do so, though the singer laughs off that suggestion. The songs of grief seem to describe the breakup of his first marriage, while the blissful ones pay homage to his second. More interesting than gossip is the sound of Vedder being so direct. We've heard it before, notably in the wonderful "Just Breathe" from 2009's Backspacer, a precursor to this project. It's a treat and a revelation to spend a sustained amount of time with this gentle Ed.

The tracks aren't utterly spare. Cellist Chris Worswick provides gentle counterpoint in the plaintive "Longing to Belong." Glen Hansard (The Frames, The Swell Season) plays Emmylou Harris to Vedder's Gram Parsons in the country standard "Sleepless Nights," while Cat Power's Chan Marshall flirts discreetly with him in the 1920s cutie "Tonight You Belong to Me." A few sound effects and cutaways — one track is eight seconds long, and consists of Vedder flubbing a chord and comically swearing — mark this as a sort of bedroom recording, though it was actually made in studios in Seattle and on Oahu and co-produced by Northwest rock favorite Adam Kasper.

Though it's most vehemently a solo album, and its songs often consider the experience of loneliness, Ukulele Songs doesn't feel like an isolated effort. In a recent phone conversation, Vedder talked of the ukulele as an instrument that can bring strangers together; just whip it out of your backpack, and you've got a singalong. What Ukulele Songs brings out in Vedder is warmth we've heard before, but which is often obscured within a thicket of noise. It's lovely to bask in it for a bit.