Accessibility links
Yemen Leader's Exit Leaves Shaky Political Ground Ali Abdullah Saleh is in Saudi Arabia for medical treatment after he was wounded in a rocket attack. His departure set off celebrations in Yemen, but there are concerns his absence could create a power vacuum in a country where al-Qaida has a strong base. 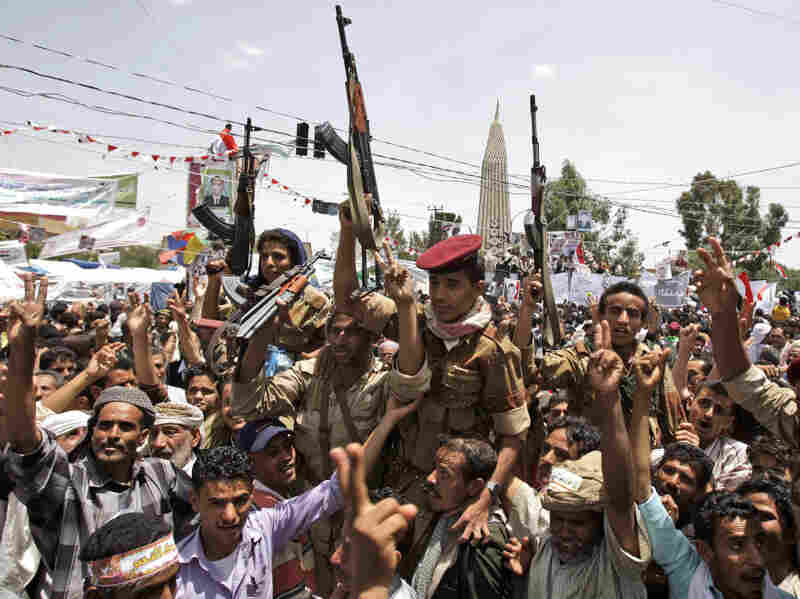 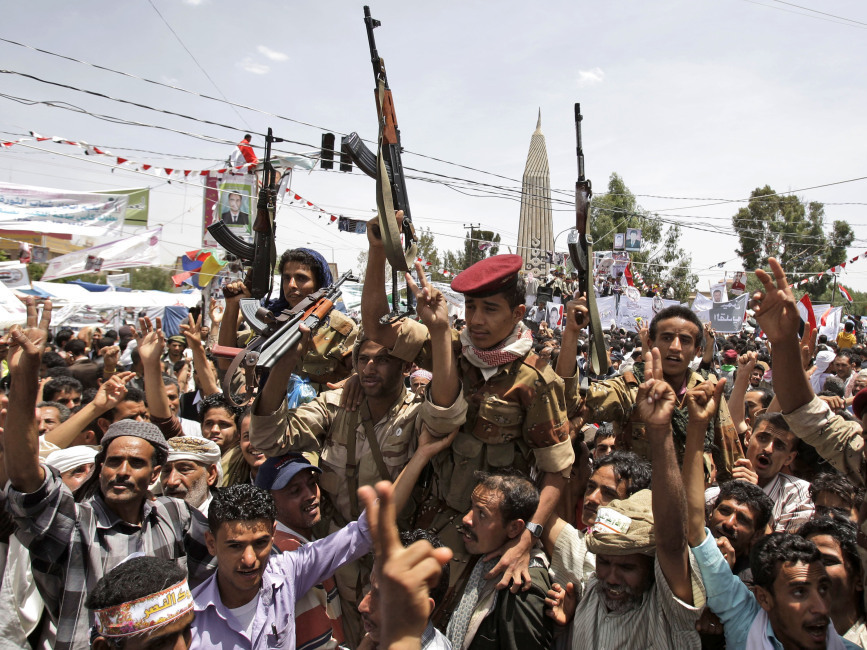 Yemeni army soldiers, lifted by anti-government protesters, chant slogans and hold up their rifles as they celebrate President Ali Abdullah Saleh's departure to Saudi Arabia, in Sanaa, Yemen, on Sunday.

Yemen's president Ali Abdullah Saleh, is recovering in a Saudi hospital, following surgery for wounds he suffered in a rocket attack on his palace Friday. Saleh, who has ruled Yemen for 33 years, left with several senior government officials who were also wounded in the attack.

Saleh's departure set off celebrations in Yemen as protesters have tried for the past four months to oust him from power. But there are concerns his absence could create a power vacuum in a country where al-Qaida has a strong base.

Just a few days ago, there were genuine fears that Yemen was spiraling into civil war, edging closer to becoming a failed state. Peaceful protests that began earlier this year, calling for Saleh's ouster, evolved over the past few weeks into armed conflict between tribal groups and government supporters.

Throughout it all, Saleh refused to step down. But Friday's attack on his presidential compound, in which at least 11 people were killed, and several others, including the president, were seriously wounded, has changed the dynamic, says Christopher Boucek, a Middle East expert with the Carnegie Endowment for International Peace.

"President Saleh's departure is really the opening that needed to happen in order to move past this current political crisis," Boucek says. "Nothing could really change until he left. The fighting wasn't going to stop, and the protest movement that started all this really was hinging on him leaving."

Officially, Saleh only transferred power temporarily to his vice president, Abed Rabbo Hadi, and members of his party said he would return to Yemen. Boucek says that's unlikely — he says Saudi Arabia's agreement to offer Saleh medical treatment was conditional.

"I think all of this must be with the understanding that he's not going to go back to Yemen to assume the presidency," Boucek says. "I don't see how he can go back and be president."

Concerns Over A Power Vacuum

While Saleh's departure was met with celebrations, there were also clashes in some areas of Yemen. Gregory Johnsen, a Yemen expert with Princeton University, says the next few days are critical.

"It's unclear how this is going to go, because while President Saleh has left, his sons and nephews — who control the Republican Guard, the special forces and the central security — forces are still in Yemen. And so while the U.S. and Saudi Arabia would like to see this be the final exit for Saleh from Yemen, I think President Saleh and his immediate family probably have a different road in mind," Johnsen says.

Johnsen says there are concerns ongoing conflict in the wake of Saleh's departure could create a power vacuum — one that could be exploited by al-Qaida. U.S. intelligence officials say Yemen is a prime breeding ground for al-Qaida, and that tentacles of the Islamist terror group have taken hold in some areas of the country.

The U.S. long considered Saleh's government an ally in fighting the local chapter, known as al-Qaida in the Arabian Peninsula. Boucek, with the Carnegie Endowment for International Peace, says that changed earlier this year.

What's Next For Yemen?

Princeton University's Johnsen says the challenge for the U.S. and the international community is to impress upon whatever government comes next that terrorism and security needs to be the first order issue.

"A stable, viable Yemen is really in everybody's best interests, because we've seen what comes from having a chaotic Yemen — one that's in danger of falling apart," Johnsen says.

Les Campbell, a Middle East and North Africa specialist at the National Democratic Institute, says there are many potential leaders and a vibrant and cohesive opposition that could take over from Saleh if given the chance.

Campbell says the U.S. has been involved throughout the crisis — shuttling amongst the players, encouraging a negotiated political settlement.

"The U.S. still has obviously many interests, particularly the terrorist angle, but the interest of the U.S. is to clear this up as quickly as possible to avoid further uncertainty, and to encourage all the political forces to come together and discuss," Campbell says. He says he's sure that's what Gerald Michael Feierstein, the U.S. ambassador to Yemen is working on right now.