Accessibility links
Crystal Cathedral: A Mega Church In Troubled Waters In order to pay back its debts, the mega church said it will sell its soaring glass building and 40-acre campus to a local real estate developer, who will then lease the buildings back to the church so services and programs can continue. The church hopes to buy everything back in four years. 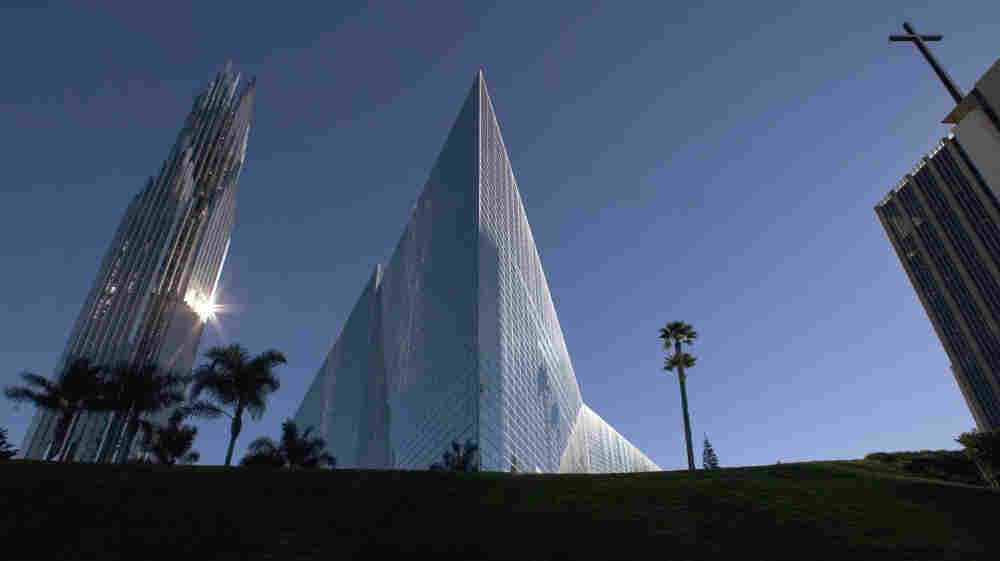 The Crystal Cathedral plans to sell its campus and glass-spired church — and then lease it back — to emerge from Chapter 11 bankruptcy and settle $35 million in debt. Damian Dovarganes/AP hide caption 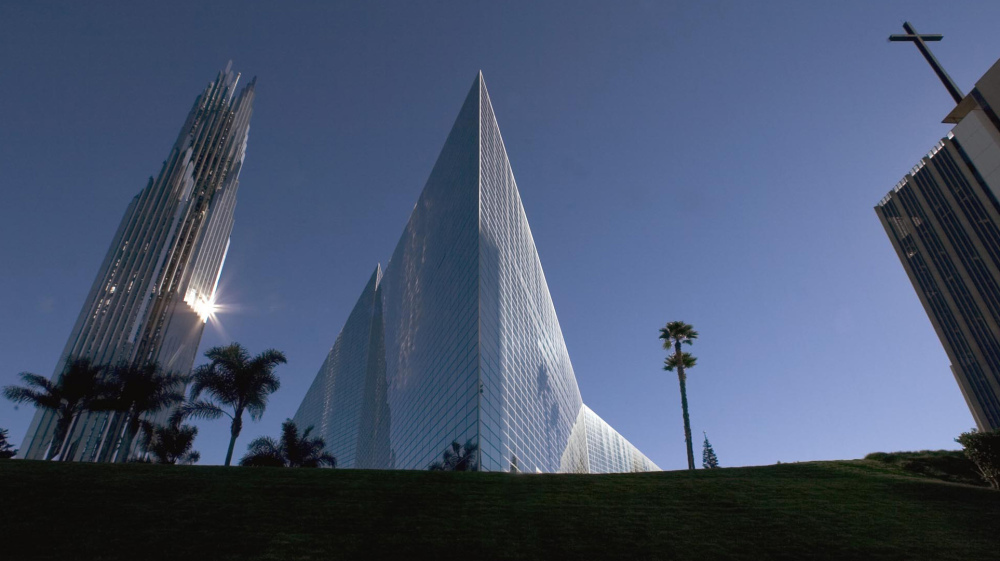 The Crystal Cathedral plans to sell its campus and glass-spired church — and then lease it back — to emerge from Chapter 11 bankruptcy and settle $35 million in debt.

After battling financial difficulties for several years, Crystal Cathedral Ministries declared bankruptcy last October. Church spokesmen say that will allow the ministry, known for its soaring glass building and global weekly broadcasts, to reorganize and repay its many debts. But money may not be the only problem.

The Hour of Power, once the brainchild of a young California pastor named Robert Schuller, is now fully middle-aged. At a service celebrating four decades of religious broadcasts, Schuller confessed to his congregation: The thing that worried him when he began his television ministry in 1970 is an even bigger challenge now.

"It was the money that scared me, and that's where the anxiety still comes, because the costs go up, and many of my strongest supporters are passing on," Schuller said.

That and other problems have left the Crystal Cathedral about $50 million in debt. But spokesman John Charles says everyone owed will be repaid.

"We feel it's biblical that we pay our debts in full, and that's our ultimate goal," he said.

To do that, the Crystal Cathedral's soaring glass building and 40-acre campus will be sold to a local real estate developer, who will then lease the buildings back to the church so services and programs can continue.

The church hopes to buy everything back in four years.

"Four years is a really, really fast turnaround to come up with $30 million when they're $50 million in debt right now," says Richard Flory, a sociologist at the University of Southern California's Center for Religion and Civic Culture.

Flory has been charting the progress of mega churches for a few years now, and he thinks the Crystal Cathedral's repayment plans may be unduly optimistic.

"The debts they report are anywhere between 46 [million] and 50 million, selling it for 46 million and then they're buying it back for 30 million? Somebody's losing money," he said.

The church wasn't always financially pinched, says Diane Winston, who specializes in media and religion at USC's Annenberg School. In the beginning, growth was quick and contributions generous. She says Schuller's personal appeal was important when the church was founded.

"At the time, he wasn't trying to organize a mega church," she says. "He was knocking on people's doors in Orange County, Calif., and trying to figure out why people didn't come to church and trying to get them to come to his church."

The congregation that started out with hundreds in a drive-in eventually morphed into thousands who met in a huge building that became a landmark, complete with orchestra and several choirs.

"It's not surprising that when he organized and the way in which he did it, that he might have had a clientele that reflected the way Orange County looked at that time," she said. "And the fact that he hasn't grown the church in significant ways may explain why it's graying and why it's so white."

Scott Thumma, who teaches at the Hartford Seminary and is an expert on mega churches, says he isn't shocked by the disclosure of this church's recent financial troubles.

"The Crystal Cathedral has been having trouble for several years, and I figured it would be only a matter of time before it had to change its financial structure," he said.

And it's not just the money: Thumma says changing its style of worship and broadening the demographics — not only of Schuller's congregation but the staff that serves it — is critical.

"Culture and society and worship styles have changed, but because his brand, in essence, was defined by TV for decades, it was very difficult to shift away from that," he said.

"Change is good," one saying goes. Another says "change is hard." And for the Crystal Cathedral to survive its current crisis, many observers believe it's going to be both.