Accessibility links
Think Twice Before Reaching For A Caffeine Boost Caffeinated products are everywhere — from energy drinks to strips that dissolve on the tongue. But caffeine is still a drug that affects sleep and mood, experts note — and parents should be cautious about how much their kids are ingesting. 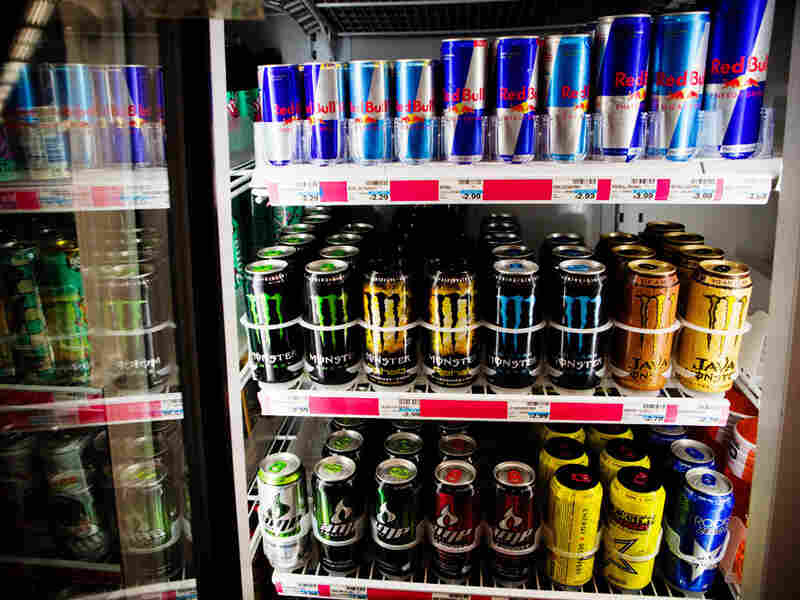 An assortment of energy drinks are offered at a drug store in Washington, D.C. Psychologists say they don't know enough about how caffeinated products like these affect teens and kids. Maggie Starbard/NPR hide caption 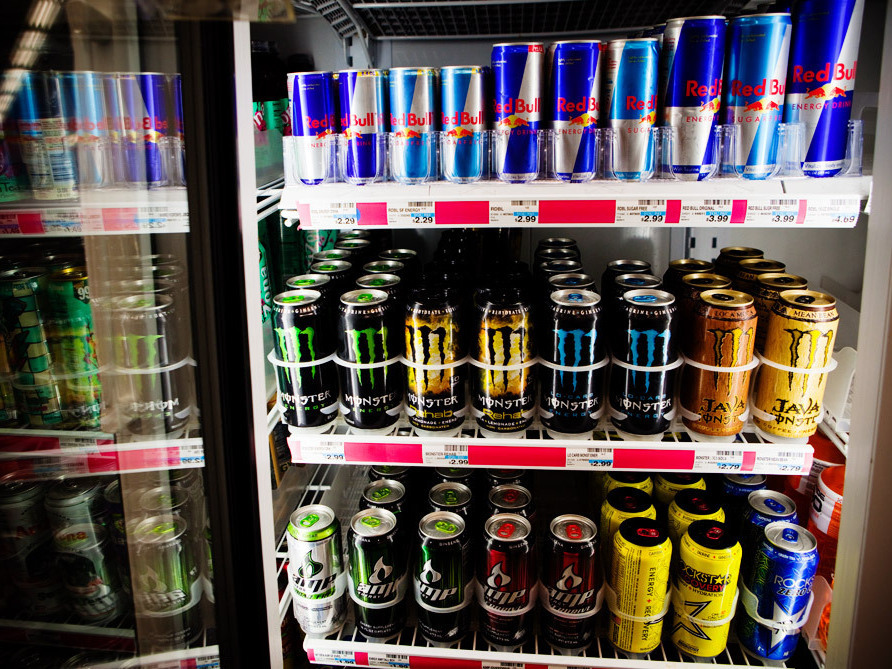 An assortment of energy drinks are offered at a drug store in Washington, D.C. Psychologists say they don't know enough about how caffeinated products like these affect teens and kids.

Caffeinated energy drinks are everywhere, and new products are being introduced all the time.

Caffeine has many well-known benefits. Even so, last week the American Academy of Pediatrics issued a report recommending that children and adolescents never use energy drinks.

The latest caffeine product takes a new form: It's a stamp-sized gel sheet that dissolves in the mouth like a breath freshener. The product, called Sheets, is sort of like an energy drink without the water. A promotional video shows NBA star LeBron James, in black and white, placing a bright red gel strip on his tongue.

James is not just endorsing the product — he is a co-founder of the company. Warren Struhl, another partner, says Sheets has some advantages over caffeinated drinks.

"You don't have calories, you don't have to make a pit stop, and it's great tasting," Struhl says. "So we created a delivery system — as we say, a Listerine strip meets an energy product — and our product can be a replacement for an energy drink, an energy shot or even a cup of coffee."

Psychologist Harris Lieberman of the Army Research Institute of Environmental Medicine outside Boston has been studying caffeine for three decades.

"I find it very surprising to see how many different varieties of caffeine-containing products have been invented and marketed," Lieberman says. 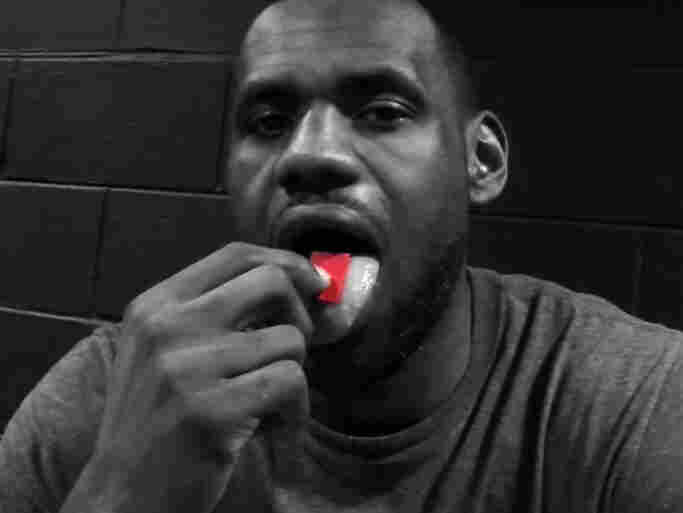 In a screen shot from a promotional video for a new energy product, NBA star LeBron James places a bright red gel strip on his tongue. Youtube hide caption

He says the Army has developed its own energy product — caffeinated gum — which is now included in some rations, because caffeine helps sleep-deprived soldiers maintain vigilance. And several energy-drink bottlers are now marketing energy gum to the general public.

Lieberman says caffeine's popularity reflects our modern lifestyle. "It's a combination of driving ourselves and having high expectations of ourselves, but also of society making a lot of demands on us, so they kind of add up to give us insufficient time to sleep."

Psychology professor Amy Wolfson of the College of the Holy Cross in Massachusetts says the focus should be on getting more sleep. "We devalue sleep as a society, and that's been clear to sleep researchers for a long time," she says.

Wolfson says teens are often sleep-deprived, but instead of getting the sleep they need, many turn to caffeine. "You wonder a little bit whether the marketers, whether purposefully or not, realize that we know that we have a sleepy population, beginning in seventh grade and possibly earlier, and that they are going to use these products in order to be more alert, be more attentive."

Little Research On Kids And Caffeine

Psychologist William "Scott" Killgore of McLean Hospital in Belmont, Mass., says because adults consume caffeine in foods all the time, we don't really take it seriously when it comes to our kids.

Sleep Experts Answer Your Questions On Teens And Shuteye

Energy Drinks, Even Without Alcohol, May Pose Risks For Youngsters

"But this is a real and powerful drug," Killgore says, "so it can affect your sleep, it can affect your mood, a lot of other cognitive and psychological factors. You need to be aware of what kind of drugs your kids are ingesting, and caffeine is one of them."

"We really don't know the effects caffeine has on the body, and even psychologically, with kids. There's a lot of research on adults, but relatively speaking, it's restricted on kids so far," he says.

Just down the hill from Killgore's office, David Bourret, 25, is rollerblading with his friends in the park. "I drink a lot of Red Bulls and I drink a lot of Rockstars," he says, naming two brands of energy drinks. "I see they've got these new gums out, but I haven't tried the gum out yet."

Bourret says he uses energy drinks to help him wake up and to get motivated for workouts. He likes the flavor, too, but says the drinks are not for everyone. "Sometimes I drink them and I'm totally wired up," Bourret says. "So I definitely think there should be an age limit, because if you drink too many of them, you are going to be off the wall."

In fact, on the Sheets package it says children younger than 12 should not use the gel strips. Bourret says he has not heard of Sheets, but that's probably just a matter of time. The company launched a $10 million promotional campaign with TV ads featuring star athletes and posted a billboard in Times Square.