Accessibility links
Bahrain's Crackdown Creates Sectarian Fallout The protest movement that swept Bahrain in February and March has since turned into a bitter sectarian confrontation. Sunni authorities have destroyed at least 47 Shiite mosques across the country in recent weeks. Analysts say the royal family is pushing a sectarian agenda that might be its undoing. 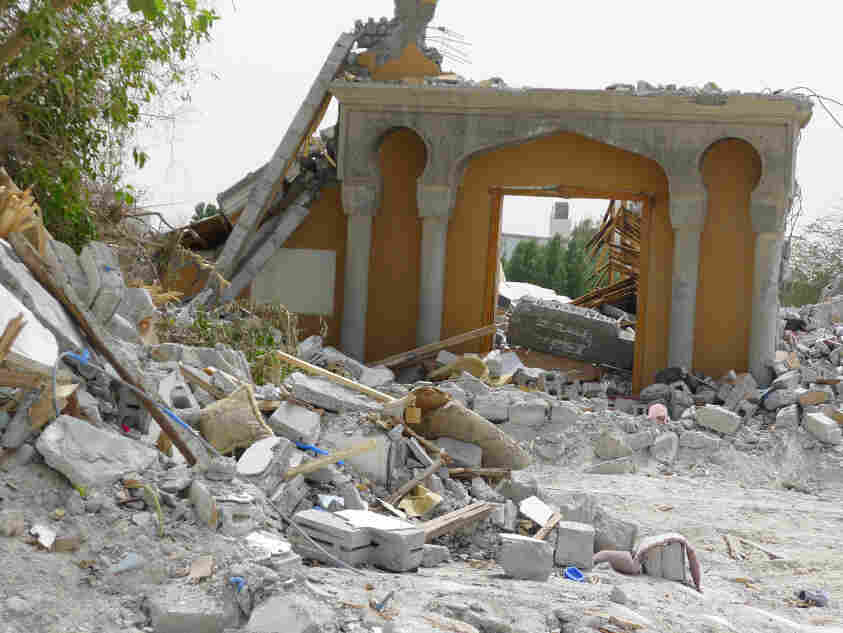 The Mo'men mosque in Nwaidrat stood in the same location for generations until it was bulldozed last month. The Sunni-run government in Bahrain has destroyed at least 47 Shiite mosques in recent weeks. Roy Gutman/MCT/Getty Images hide caption 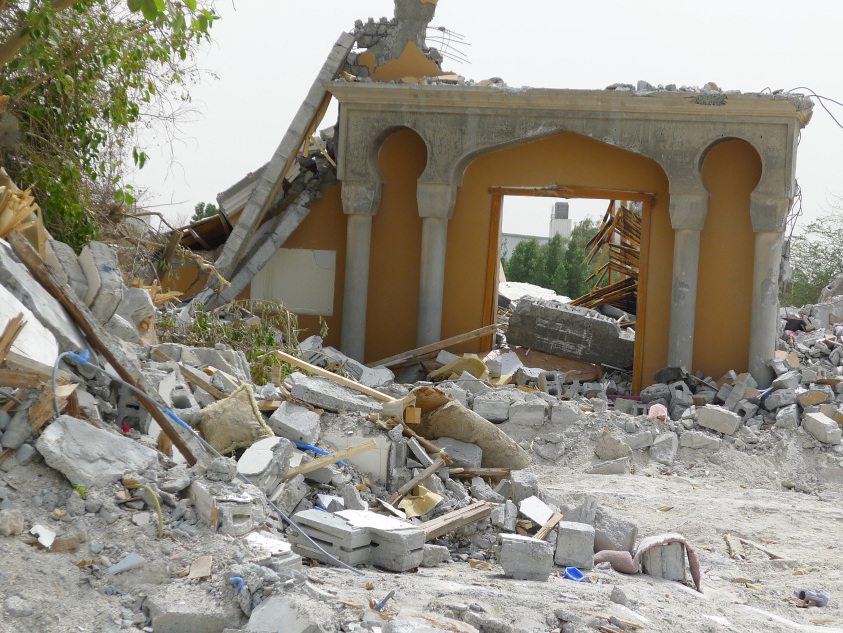 The Mo'men mosque in Nwaidrat stood in the same location for generations until it was bulldozed last month. The Sunni-run government in Bahrain has destroyed at least 47 Shiite mosques in recent weeks.

The mass protest movement that swept Bahrain in February and March has since turned into a bitter sectarian confrontation. The tiny island nation — a key U.S. ally in the Persian Gulf — is mostly populated by Shiites, but it's ruled by a Sunni royal family.

Analysts say the family is now pushing a sectarian agenda that might eventually be its undoing.

From the very beginning, it was no secret that most of the protesters in Bahrain were Shiites. They are the underdogs in Bahrain: They're generally poorer than the average Bahraini, and they're kept out of top positions in the government. Meanwhile, the government imports Sunnis from Pakistan, Syria, Yemen and elsewhere to tip the scales in favor of Sunnis.

As the February protests continued into March, Bahrain's state-run media began casting the uprising in sectarian and religious terms. The government rounded up Shiites, detained them, beat them and fired them from their jobs.

And radical Sunni groups emerged from the shadows.

In one video posted online, a Sunni member of Parliament wields a sword as he encourages his followers to take whatever means necessary to stop protesters. At the end, he implores God to help Sunnis defeat Shiites.

The rhetoric is particularly ugly online. One government-sanctioned website recently threatened violence against an American diplomat because he had documented abuses against Shiites. The site posted a photograph from the diplomat's wedding and gave his address.

In the past several weeks, authorities have demolished at least 47 Shiite mosques across Bahrain, like Al Alawiyat mosque, which used to stand in the middle of the capital, Manama.

The area where the mosque used to stand now looks just like an open field. You can see the foundation, there's rebar sticking out of the sand, but otherwise it's totally gone — it's just a big open expanse of sand.

Some officials claim the mosques were illegally built and that's why they were torn down. Others have produced documents showing their legal registration.

At this point, it all boils down to who controls the narrative about what happened in February and March.

If you're a Shiite, the protests were completely peaceful and the resulting crackdown is a brutal persecution of a group that for 1,400 years has suffered as the minority in Islam. In reality, protesters did throw rocks, block roads and destroy property. It's even alleged they ran over a police officer and killed him.

If you're a Sunni, you're the one who was persecuted by radical groups who want to topple the regime, says Sheikh Abdulatif Mahmoud al Mahmoud, who leads a largely Sunni movement that recently has held mass rallies with slogans like "Now It's Our Turn."

He says that it's not a crime to express your own point of view. But if you are trying to lead a force that's calling for bringing the regime down, he says, that would be illegal and is not accepted.

Like most Sunnis in Bahrain, Mahmoud believes the protest movement was actually orchestrated by Shiite-dominated Iran, just next door. But when pressed for evidence of such a plot, Mahmoud can only point to isolated events, like the fact that Iranian state media was reporting during the protests.

If you create divisions, then you also have moderate Sunnis who are pushed more toward the government side, because this creates a sense of fear between the two communities, and people are quite frankly forced to pick sides.

"They were broadcasting directly to media channels which were financed by Iran for the opposers against the regime," he says through an interpreter.

Staci Haag, the regional director for the National Democratic Institute, says pinning the blame on Shiite Iran is little more than a ploy by Bahrain's royal family to gain support from the West, and from its own people.

"Bahrain society generally is made up of a lot of moderate people," Haag says. "But if you create divisions, then you also have moderate Sunnis who are pushed more toward the government side, because this creates a sense of fear between the two communities, and people are quite frankly forced to pick sides."

The question now is if a national dialogue planned for next month will bring Bahrain back to the way it was, when Sunnis and Shiites didn't pick sides and lived together in peace.

Sectarian conflict in Iraq eventually turned brutal and violent, and the uprising in Syria is beginning to take on a sectarian tone that many worry could spill into deeply divided Lebanon.

Haag and other Western analysts say authorities in Bahrain's ruling family may eventually come to regret lighting a sectarian fire that they can't put out.