Accessibility links
A Look Back At Bush's Surplus, Tax Cuts President George W. Bush signed his first major round of tax cuts in 2001, reveling in a surplus and describing the reductions as giving extra federal funds back to taxpayers. Ten years later, the President Obama is facing a massive budget deficit. Are Bush's tax cuts to blame? 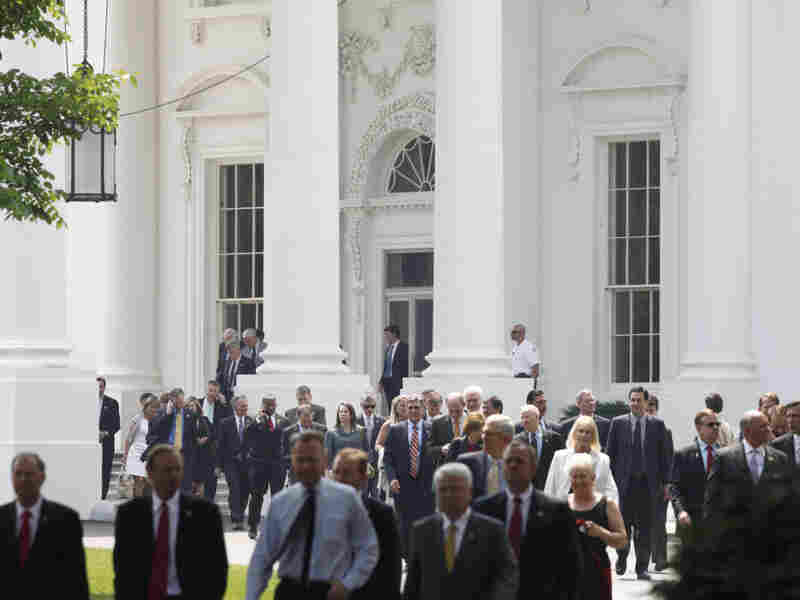 House Republicans leave the White House on June 1, after a meeting with President Obama about the debt ceiling. Charles Dharapak/AP hide caption

Later this week, Vice President Joe Biden will host another meeting with Republican and Democratic lawmakers looking for ways to reduce the federal budget deficit.

The red ink they'll be discussing reflects both government spending and deliberate moves to reduce taxes, including a major round of cuts signed into law by President George W. Bush 10 years ago Tuesday.

The signing ceremony was originally going to be outdoors, on the South Lawn of the White House, but rain forced a hasty relocation to the East Room.

Weather wasn't the only forecast that turned out unduly optimistic. Bush described the reductions as giving extra federal funds back to taxpayers.

"We recognize, loud and clear, the surplus is not the government's money," he said. "The surplus is the people's money. And we ought to trust them with their own money."

It's been a long time since anyone has talked about a government surplus in Washington, D.C.

Maya MacGuineas, who heads the Center for a Responsible Federal Budget, says within a year of that 2001 tax cut, the federal government was back to borrowing money, and it's been running in the red ever since.

"This is one of those 'you can't count your chickens before they've hatched' moments," MacGuineas says.

To be sure, the tax cut wasn't the only blow to the government's bottom line. The recession took a toll, and after the Sept. 11, 2001, attacks, there were new expenses for homeland security and fighting Al-Qaida. Instead of paying more to cover these costs, Americans were paying less.

Roberton Williams of the Tax Policy Center says wealthy families saw the biggest jump in their take-home pay, but everyone who paid income taxes got a break.

"Everybody got something," he says, "because one of the things the 2001 act did was create a 10 percent tax bracket, which lowered taxes even for people at the bottom of distribution. It doubled the child tax credit from $500 to $1000, so for families with children, it was a big boon."

Good for families with children. Not so good for the government's coffers.

Conservatives often promote tax cuts as a way to stimulate economic growth, but the years after 2001 were marked by the slowest growth since World War II.

We're going to have to focus on some of the difficult things: cutting spending, raising revenues. That's going to be less fun than the stuff they were doing for the last decade.

The tax cuts also disappointed small-government advocates, who hoped they might "starve the beast." MacGuineas says under both presidents Bush and Obama, the government "beast" has eaten better than ever, even though much of its lunch money is borrowed.

"You can't cut taxes without cutting spending," she says. "But what did we do? We cut taxes and we increased spending. So we left ourselves in a tremendous fiscal mess."

Glenn Hubbard, who was Bush's top economic advisor in 2001, agrees that the government can't keep running on red ink. But he insists that the tax cuts are not to blame.

"I think there's a good case to be made for low marginal tax rates," Hubbard says. "And I'm exactly where I was when I worked with Governor Bush and President Bush on those low marginal rates. At the same time, we're in a position of fiscal unsustainability, and our political leaders need to confront that. If it were my choice, we'd solve that on the spending side."

But Obama's fiscal commission and other bipartisan groups have concluded that it will take some increase in tax revenue, along with lower spending, to bring the budget back into balance. As a share of the economy, tax revenues today are the lowest they've been since 1950. Even so, the Tax Policy Center's Williams says raising revenue will not be an easy sell.

"We've seen a watershed change in people's perception of taxes in the last 10 to 20 years," he says. "Part of that is the viewpoint that we should never, ever, ever raise taxes. A majority of Republicans in both houses of Congress have signed pledges to that effect."

And it's not just Republicans anymore. Back in 2001, a majority of Democrats voted against the Bush tax cuts. A second round of cuts two years later was so controversial, Vice President Dick Cheney had to cast a tie-breaking vote in the Senate.

But last December, a majority of Democrats joined Republicans in extending the tax cuts for two more years. While Obama would like to reverse the cut for the wealthiest Americans, it's the tax cuts for everyone else that really bust the budget. MacGuineas notes that those cuts now have bipartisan support.

"What once was the Bush tax cuts, which a lot of Democrats were running against, has really now become the Bush-Obama tax cuts," she says. "And unfortunately, what we're seeing is how politics works — everybody wants to do the easy stuff. But the world has changed. Our budget's in bad shape, and now we're going to have to focus on some of the difficult things: cutting spending, raising revenues. That's going to be less fun than the stuff they were doing for the last decade."