Accessibility links
Yemeni Photographer Turns Her Lens On The West Earlier this year, Amira Al-Sharif came to New York City to document the lives of young American women. The 28-year-old was born in Saudi Arabia, grew up in Yemen and was the first person from her family to graduate from university. And while Western journalists often document Arab women, Al-Sharif wanted to flip the script.

I clicked on Amira Al-Sharif's video a couple of months ago while surfing the Web for inspiration. Her story was featured on a website called Kickstarter — a site where pretty much anyone can make a video plea to get his quirky personal projects funded.

On the video she says: "I'm looking for your support during my year in America. My project will be documenting the lives of American women my age and to compare and contrast them with the lives of Yemeni young women." 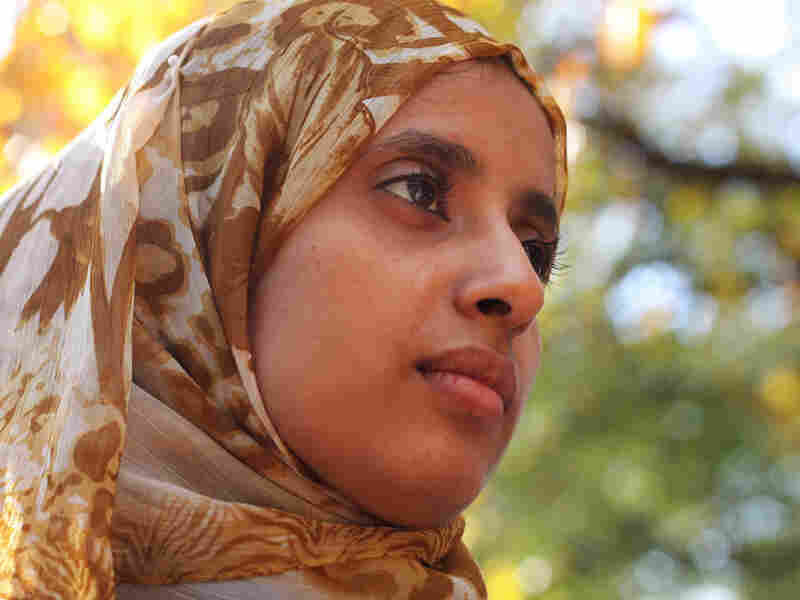 Amira Al-Sharif was born in Saudi Arabia and grew up in Yemen. She was the first person from her family who graduated from a university — and she got money to take photos in America. Shereen Marisol Meraji/NPR hide caption 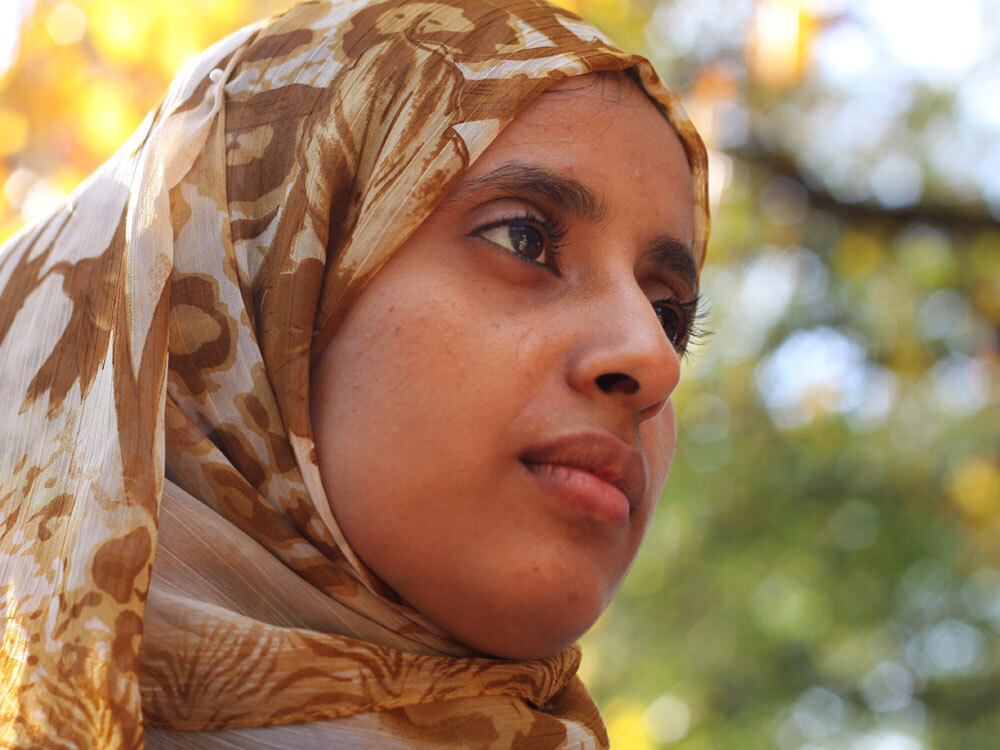 Amira Al-Sharif was born in Saudi Arabia and grew up in Yemen. She was the first person from her family who graduated from a university — and she got money to take photos in America.

Al-Sharif, 28, was born in Saudi Arabia and grew up in Yemen. She was the first person from her family who graduated from a university. And, in the U.S., she was turning her camera lens on us. That's why I wanted to meet her — I liked the idea of a Middle Eastern journalist flipping the script. It seems like it's always the other way around: Western journalists documenting Arab women.

"She's already been pushing the boundaries that were around her — and that was one of the reasons why we thought she was such a great candidate to bring to the States," says Stephanie Sinclair, an American photojournalist who has been documenting child-marriage issues for the past eight years. Al-Sharif was her interpreter in Yemen.

"She has that thing that you can't give people. You can't ever teach people how to get along with people. How to make them trust you — and she has that innately," Sinclair says.

Being Bold In Tompkins Square Park

Sinclair was inspired by Al-Sharif's guts and raw talent. So she found a way to bring her to the International Center of Photography in New York City. And that's where I met Al-Sharif nine months ago.

We're in the East Village making our way to Tompkins Square Park so Al-Sharif can take pictures for one of her first assignments. She's wearing sneakers, a flowing long-sleeve shirt over jeans, and a pretty silk scarf over her hair. This is not her usual outdoor attire in Yemen — she's usually wearing a figure-concealing black abaya and a face veil called a niqab that has a narrow opening for the eyes. 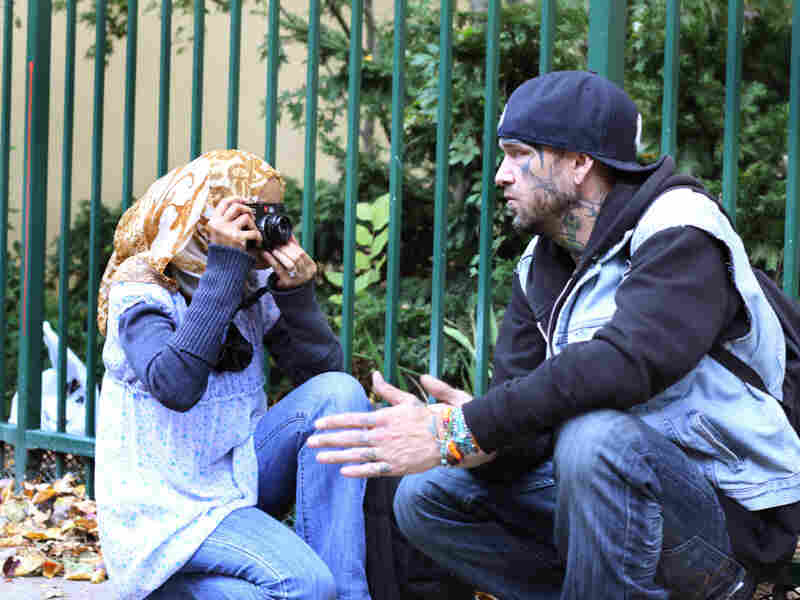 "People think the girl who wear niqab — she can't do whatever she wants. And if it's like this, why am I here? If I can't do anything?" she says. "And really there are a lot of women in Yemen, nobody know about them. Nobody knows how much they are strong, how much they have fighting spirit."

Al-Sharif has only been in the U.S. for a few weeks at this point, but she is bold. The first time she took photos in New York was on a Sept. 11 anniversary — and she was wearing her hijab.

At Tompkins Square Park, there's a free punk-rock show going on and Al-Sharif has found her subject in the crowd: a 38-year-old park regular, Matt Logan. The guy is the visual stereotype of hard living, complete with face tattoos (and not the artsy kind).

We spent most of that first day with Logan. Al-Sharif asked him about living away from home, getting arrested and doing drugs.

"What do you feel when you smoke marijuana?" she asks him.

"I feel very relaxed and in tune and in touch with nature and everything surrounding me," Logan says. "I feel like I'm in sync with the universe."

Al-Sharif seems pretty fascinated with Logan. Maybe it's because his life is nothing like hers. She may have a fighting spirit — but that fight can never be a full-on rebellion like Logan's.

It comes down to family honor: She never wants to embarrass her family, to shame them. And I feel that on our first visit. She was very careful not to say anything that might be construed as criticism of her homeland or her culture.

'You Cannot Disappear' In Yemen

Four months after that first encounter, Al-Sharif is showing me some of her work at the International Center of Photography. She's struggling with her American Women photo project.

Her subjects disappear — they'll stop calling or texting her back.

"I think it's the difference. Yemen is more like families and groups — you cannot disappear," she says. "You should have tribes, like us."

I realized that people here, they don't know where is Yemen. I really would love American people to know Yemen. I'm being here as a body, but my spirit [is] there.

Al-Sharif has had the most luck with her subject Anna. She's a 24-year-old Brooklynite whose hobbies include fire dancing. Although Anna's not a member of a tribe in that Yemeni sense, she surrounds herself with a group of free-spirited musicians and artists. And she has allowed Al-Sharif full access to her world.

She showed me her favorite photo from that trip: A shot of Anna, her nieces and her grandparents all hanging out on a double bed. Al-Sharif liked it so much she emailed it to her family and friends in Yemen.

Al-Sharif is drawn to the traits in her subjects that remind her of home. And that's where she wants to make it as a photojournalist — a Yemeni documenting Yemen.

"I realized that people here they don't know where is Yemen," she says. "I really would love American people to know Yemen. To understand more about women issues in Yemen. I'm being here as a body, but my spirit [is] there."

Al-Sharif is looking forward to catching up with her spirit in Yemen when her program at the ICP is finished in June. She's hoping her country makes the transition from dictatorship to democracy and that she's there to capture it.

"This is Yemen history," she says. "The people want to live free. I really need to be there."