Accessibility links
For Many, It's Still A Good Time To Buy A Home Housing prices have been falling for years now, and aren't likely to turn around for a long time. While some economists say renting makes more sense, others insist it's a great time to make a home purchase in many U.S. cities. 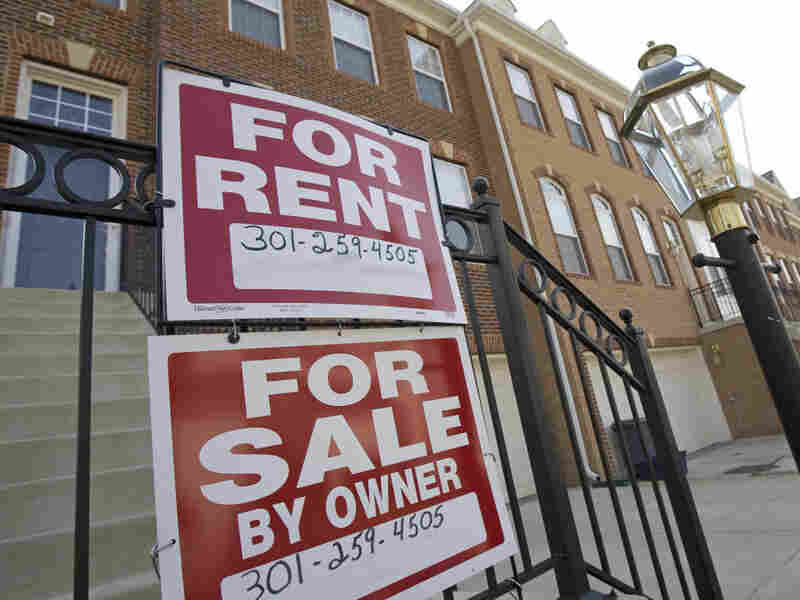 "For Sale" and "For Rent" signs are seen on the front of townhomes in Centreville, Va. Paul J. Richards/AFP/Getty Images hide caption 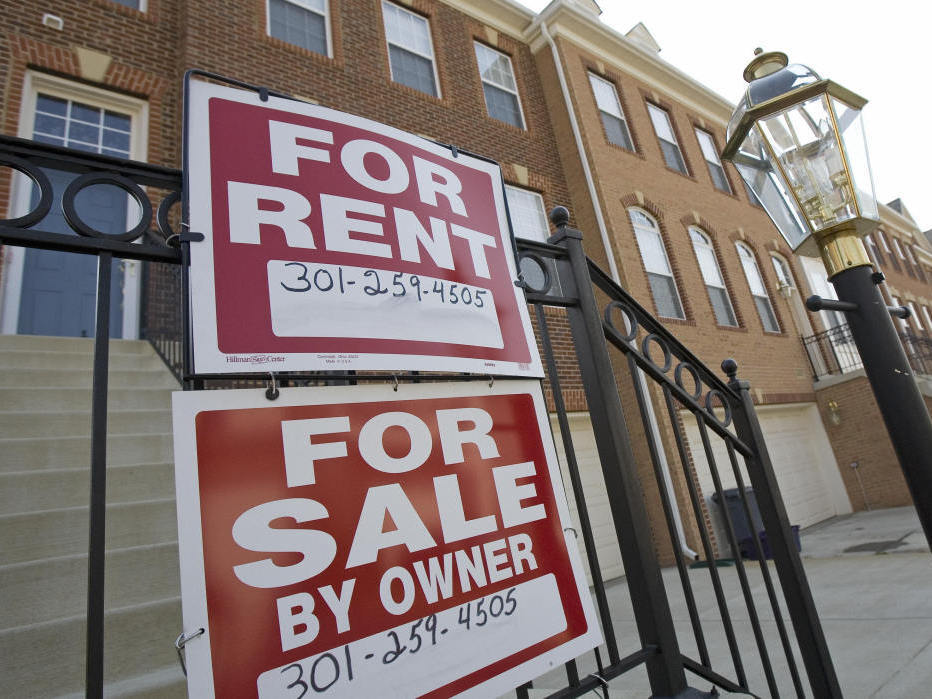 "For Sale" and "For Rent" signs are seen on the front of townhomes in Centreville, Va.

Home prices around the country have fallen into a double dip. After declining around 30 percent from their peak, they started to rise a bit last summer with the help of a federal tax credit.

But with that stimulus gone, prices are now sliding again to new lows. And while some pundits say a lease makes more sense than a mortgage, other economists insist it's a great time to buy.

Planet Money: Should You Rent Or Buy?

Since the housing bubble burst, there's been some dramatic questioning of homeownership. A Time magazine cover declared that owning a home may no longer make economic sense. And politicians are under fire for over-promoting homeownership.

It's enough to make any prospective homeowner hide under their bed in their rented apartment. But many economists, like Mark Zandi with Moody's Analytics, say these concerns are overblown.

"Everyone's re-evaluating more carefully whether they should own a home or not," Zandi says. "But for the vast majority of Americans homeownership is still the right thing."

Time to Rent or Buy? Depends Where You Live

This chart shows the percentage difference between the average monthly rent and mortgage payment for a median-priced, single-family home in communities across America. For example, in San Jose, Calif., the monthly mortgage payment averages $2,600, while rent is about $1,000 less. That's about 60 percent cheaper. But in Cleveland, it's the opposite. The average rent is about $750 per month, while the cost of buying is $420, or about 44 percent less.

This chart compares the cost of a 30-year fixed mortgage with a 10 percent down payment and five percent interest rate, to the cost of renting. It does not include taxes, insurance, etc. Data is from the first quarter of 2011.

Zandi says the same fundamentals are still true: If you can afford it, there are a lot of advantages to homeownership. With a fixed interest rate, your home payment never goes up. But your rent will climb in most places. And even if prices don't rise that much — if you pay down the mortgage every month, and you don't take out a big home-equity loan — there's an automatic savings for the future built into owning.

"This is why homeownership has been such an important part of the American Dream, because people have used it as a way to save. And it's been a relatively safe way to save," Zandi says. "Now of course, as we know as we have seen, there are ups and downs. But in general it's been a pretty good investment."

Everybody is very nervous and reticent to dive back in, but it's the people who do that benefit in the long run.

Buy Now To 'Benefit In The Long Run'

"The other thing to consider is that like any asset — after a crash, after prices have fallen very quickly — everybody is very nervous and reticent to dive back in, but it's the people who do that who benefit in the long run," he says.

Zandi has been tracking home prices as they've fallen in cities and neighborhoods across the country. And he's asking this question: Does it make sense for people to buy a home right now?

"I think the arithmetic is such that if you plan to live in your home five or more years, then you should really consider buying a single-family home in most parts of the country at this point in time," he says. "Prices have fallen so far, that single-family housing now is very, very attractive; very affordable [...] and it's now even attractive relative to renting."

Cost Of Owning Has Sunk

While it's been getting cheaper to own a home, it's actually been getting more expensive to rent a place to live.

Gleb Nechayev is a housing economist with CBRE Econometric Advisors, a real estate research firm in Boston. Nechayev has a chart that shows the cost of owning a house compared to renting. Back in 2006, the cost-of-owning line on the chart was reaching its peak, but now the line has plunged down — like the cliff of a mountain.

The Buy vs. Rent Ratio Over Time

These days, the monthly cost of renting or buying a home is about the same. That one-to-one ratio is the lowest in 25 years. That's down from 2006, just before the housing market crashed, when the cost of owning was 46 percent higher than renting.

"We are at the very bottom of that mountain right now and we have never seen that ratio so low," Nechayev says.

Nechayev's data goes back to 1986. And he says since then, it's never been this cheap to own a house as compared to the cost of renting. Of course, these are national averages and there are some big differences depending on the city and neighborhood and type of home.

But overall, it's gotten so cheap that Nechayev is puzzled why more people aren't buying.

"The fact that we haven't seen people jumping at this opportunity does suggest that we might be witnessing some kind of changing perception of homeownership," he says.

Nechayev says younger would-be homebuyers may be deciding to live in cities, where it can still be harder to find and afford a nice home or condo in a good neighborhood.

And he says job mobility is a big issue for many people in the still shaky economy. If they have to move to take a new job, it's a lot easier to do as a renter.