Accessibility links
Plans For Dams In Patagonia Draw Ire From Chileans The government says the country needs more energy to keep developing and to support a power-intensive copper mining industry. But opponents say the dam project will destroy pristine wilderness. They are calling for a shift in attitudes toward energy and the environment. 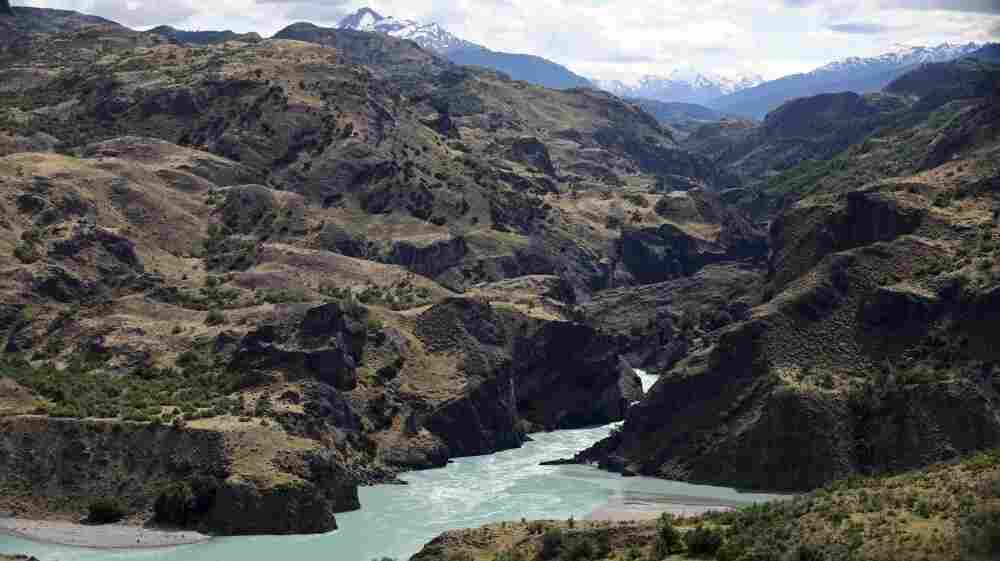 The confluence of the Baker and Chacabuco rivers in the remote Patagonian region of Aysen in Chile, as seen on Jan. 20, 2008. The plan to build five new hydroelectric dams in the region has sparked protests in Chile. Jorge Uzon/AP hide caption

Massive protests have broken out in Chile over the environment — specifically over some dams that are set to be built in Patagonia, one of the world's most iconic wilderness areas. Most citizens disapprove of the HidroAysen project, which scientists and conservationists say will forever change this region.

Yet largely because of a booming copper mining industry, Chile is hungry for energy and the government is pushing ahead with the dams.

In response, Chileans are taking to the streets. On a crisp afternoon recently, tens of thousands of protesters filled Santiago's main avenue. Bundled up in jackets and scarves, they shouted: "Chile's not for sale" and "Patagonia: free of dams." Protesters ranged from toddlers waving signs atop parents' shoulders to teenagers, adults and seniors. 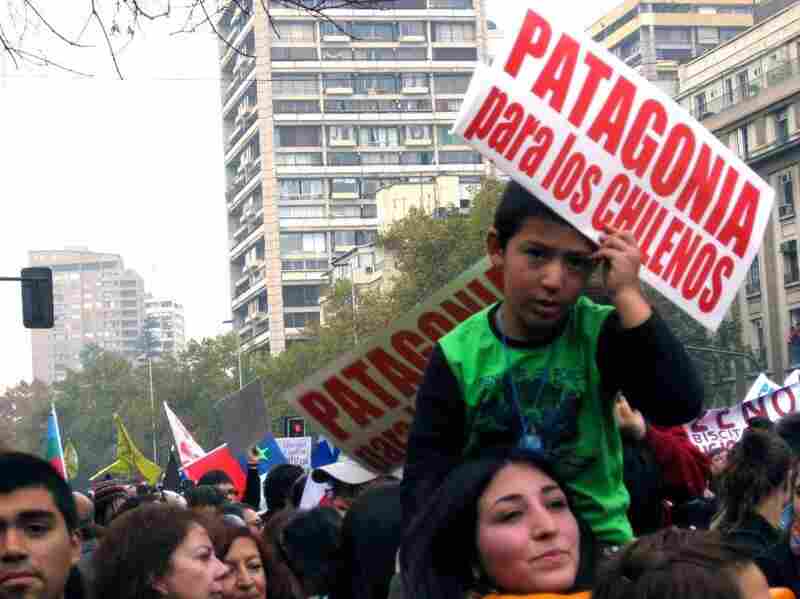 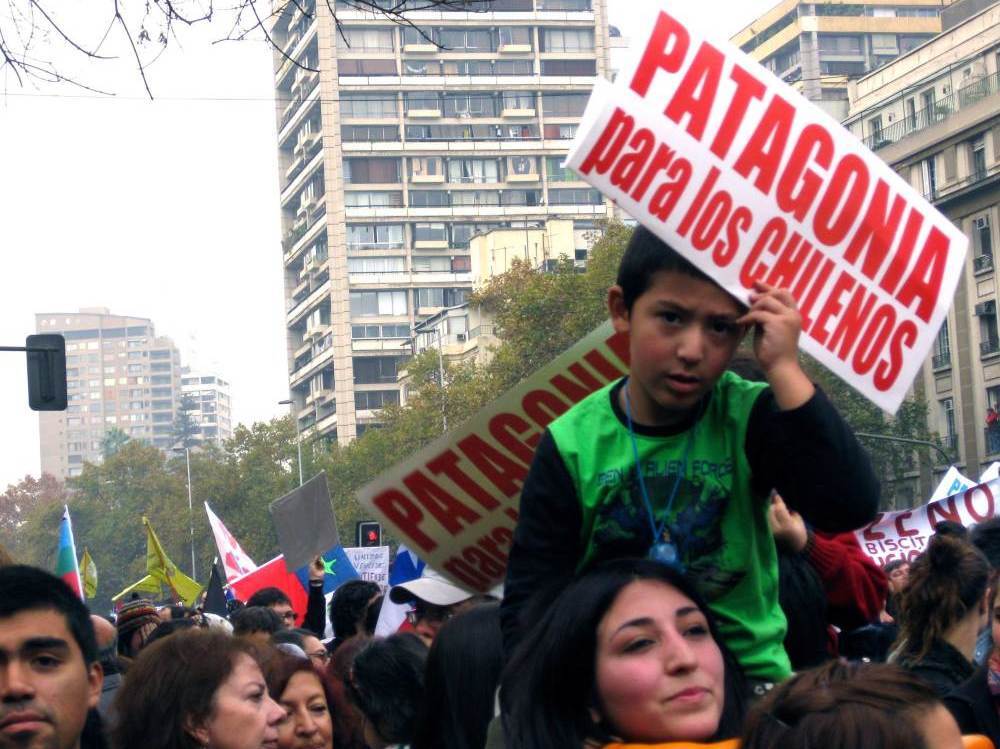 Grimilda Sanchez, 83, stood off to the side, taking it all in. She looked serious, almost disapproving. But when asked what she thought of the march, she said she was all for it.

She said the country's resources are being sold off. The march was about more than politics, Sanchez said — people have understood that they need to take to the streets to defend their rights.

The protest made her deeply happy, she said, and she decided to join in. She stepped off the curb; her shock of white hair disappeared into the crowd.

A Drive For More Energy

Opponents of the dams say the project will destroy a pristine landscape and alter the entire ecosystem of Patagonia.

"Pressure on natural resources is only going to increase. And it's going to require democratic processes that ensure that those natural resources are exploited in a way that's reasonable and sensible — and benefits local people," says Luis Mariano Rendon, an environmentalist and one of the organizers of the rally.

Chile's economy grew by about 6 percent last year and is largely driven by energy-intensive copper mining. The government insists the dams are necessary if Chile is going to keep developing. The Ministry of Environment, however, did not respond to repeated interview requests.

Rolf Luders, an economics professor at the Catholic University of Chile, says he is not too worried about energy.

"It's true that probably the cheapest and cleanest source of energy for us is HidroAysen in the south of Chile," he says. "But if you don't carry out that project, you always can have nuclear or thermal energy in the north [of Chile]."

"We have to have more energy if we want to grow," he says.

A Call For Change

But student leader Giorgio Jackson, who has been participating in the protests, says that mentality is exactly the issue.

"The country always wants to grow faster, but for what purpose? To destroy the environment?" he says. "Development or environment, that's a false question — it's not one or the other. We can advance while saving energy." 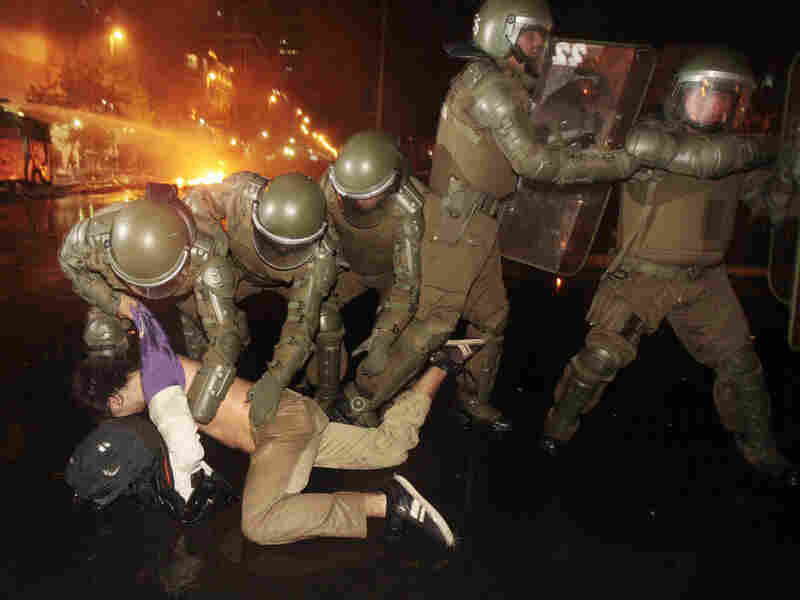 Police officers detain a demonstrator during clashes after a protest in front of La Moneda government palace in Santiago, Chile, May 20. The protest was against a $7 billion project by the multinational consortium HidroAysen to dam two of the world's wildest rivers in Patagonia for electricity. Luis Hidalgo/AP hide caption 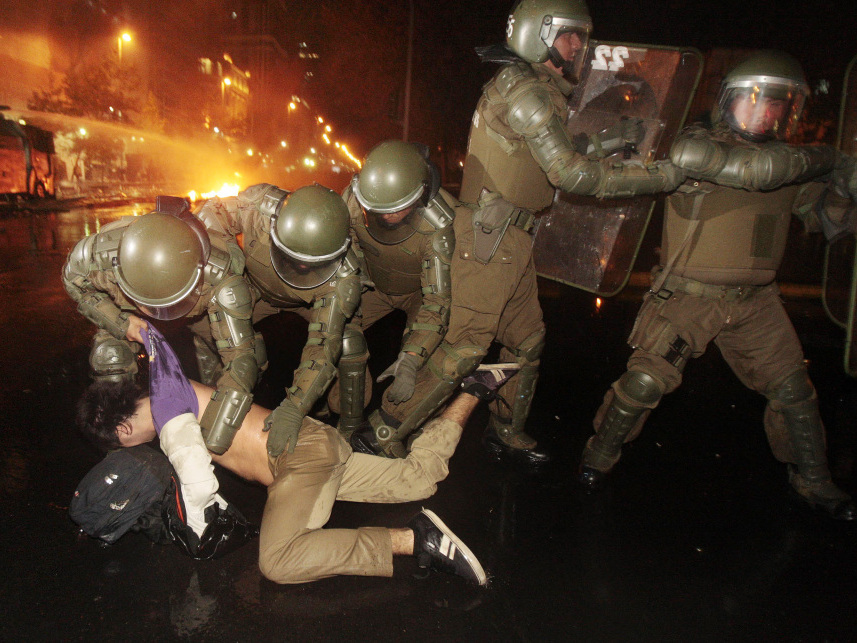 Police officers detain a demonstrator during clashes after a protest in front of La Moneda government palace in Santiago, Chile, May 20. The protest was against a $7 billion project by the multinational consortium HidroAysen to dam two of the world's wildest rivers in Patagonia for electricity.

Protesters like Jackson propose investing in small-scale, alternative energy projects, and they say they're willing to change their own energy consumption, if it means keeping Patagonia free of huge dams.

Luciano Cid, who works in management at a cellphone company, considers himself conservative. He has stopped to listen to a group of students discussing climate change in the street.

He says he shares some of the young people's opinions and that the country — and the world — is immersed in consumerism that's blocking out other values. But he says that the HidroAysen project is just one of many things that are happening to the environment — just look at the air pollution in Santiago, he says.

He has a point — air pollution from industry and cars is now so bad that citywide environmental alerts are common. The snow-capped Andes were once something to be proud of — now, they're jagged shadows in the smog. For many Chileans, the only thing that's clear is that something needs to change.

Energy Needs Have Chile Planning To Dam Rivers May 12, 2011