Accessibility links
The Root: Fly Style Supplements Wack Rhymes A few weeks ago a young, white female rapper by the name of Kreayshawn became unexpected Internet sensation. But Timmhotep Aku of The Root believes, despite her quirk and humor, she's more novelty than talent. 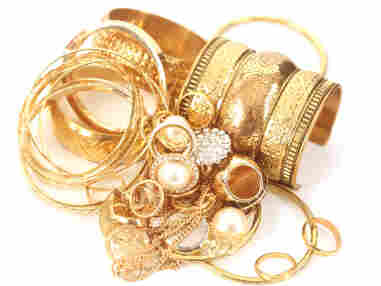 Timmhotep Aku is a freelance journalist and cultural critic living in Brooklyn, N.Y.

She raps, she's weird and she's white. Now 21-year-old Kreayshawn is also the latest YouTube oddity-turned-overnight celebrity — and no, that's not a good thing.

Three weeks ago Natassia "Kreayshawn" Zolot — a petite, foulmouthed woman hailing from Oakland, Calif. — posted the video for her song "Gucci, Gucci" on YouTube, and the Internet went nuts. The song is her self-aggrandizing rant against "basic b------" and label whores who define themselves by the luxury brands they wear.

The clip — currently at more than 2 million views — features Kreayshawn in her signature huge earrings and a pair of shiny pink Minnie Mouse ears, hanging out in the streets of Los Angeles with her sidekick-doppelgänger Lil Debbie and an entourage of young black men. The video has inspired mentions of this Internet sensation and her "White Girl Mob" on sites such as Complex, GQ and Jezebel. The video was the chum for yet another Internet-media feeding frenzy fueled by an appetite for all things anomalous, ridiculous and, of course, ironic.

To be clear, Kreayshawn's buzz — which has landed her a deal with Columbia Records — is more about novelty than the quality of her music. Her weirdness and, yes, her whiteness are what have made her blog fodder and a hot commodity. White America likes to see white people rap, even if they're bad at it. It's part of a misguided notion that white people doing "black things" are complex and therefore noteworthy.

There was a time — call it the post-Vanilla Ice era — when a white rapper actually had to be a superior MC to get noticed. Robert Van Winkle had used up all the cred that white rappers had earned through acts like the Beastie Boys and 3rd Bass.

Then came Eminem, a phenomenal battle rapper with the co-sign of one of the most revered and successful figures in hip-hop history, Dr. Dre, and now the white rap fan had a respected icon to identify with and to champion. But here we are in the 2000s, and real talent is a plus but not a necessity. Being ridiculous and somewhat of a joke is more likely to get a white MC noticed in 2011.

Let's forget, for a moment, about the fact that Kreayshawn is white; put aside whatever knee-jerk "culture vulture" reservations you might have about her; and actually listen to her rap. She sucks. Her flow is inept and stilted, and her voice is reminiscent of every telemarketer you've ever wanted to hang up on.

No, she's not good, but she is — intentionally or not — funny. And while lines like "B----, you ain't no Barbie/I see you work at Arby's/Number 2, super-size/hurry up, I'm starving!" elicit literal LOLs, they certainly don't make her a force to be reckoned with in hip-hop. Call her rap's Rebecca Black, but unlike the "Friday" singer before her, Kreayshawn has been praised by some as a refreshing new voice in pop music.

When the Fader, a music magazine considered a tastemaker's bible among the hipster set, premiered the "Gucci, Gucci" video, the post was titled "Kreayshawn Is Good and Weird, Odd Future Guys Agree." In that one headline the magazine encapsulated everything that's wrong about the pro-Kreayshawn movement.

Let's examine the first part of that sentence, the "good and weird" part. According to the sensibilities of Kreayshawn's advocates, "good" and "weird" are the same thing, especially when there's irony involved — like the irony of a white girl of ambiguous sexual orientation from predominantly black East Oakland wearing door-knocker earrings, rapping poorly, and making gun and drug references in the same song in which she refers to Google Maps and catnip.

That combo is a hipster's wet dream, but the icing on this cake comes in the second part of the headline: "Odd Future ... agrees." The implicit "agreement" comes from Left Brain and Jasper Dolphin of Odd Future, the collective of young L.A. musicians, skaters and misfits who have been written about ad nauseam (The Root hasn't ignored them, either) and are themselves an Internet phenomenon. Embraced by cool-hunting bloggers and music journalists, they were and are Web-media darlings. So the logic goes, "If Odd Future likes it, it's got to be good." Yeah, right.

Despite the Web-celeb endorsements and the media's excitement about Kreayshawn, you can't pass off ridiculousness for artistic merit. They're simply not the same. And Kreayshawn is better laughed at than acclaimed.