Accessibility links
'Slutwalk' Goes Global To Protest Sexual Assault Earlier this year, a Toronto police officer said women should "avoid dressing like sluts" to evade being sexually assaulted. The remark sparked uproar. In April, the first 'SlutWalk' march occurred in Toronto, Canada. The movement has spread across the world, including the U.S. To learn more about this march and its purpose, Michel Martin speaks with Heather Jarvis, co-founder of the first 'SlutWalk,' and Anna Fry, an organizer of the upcoming walk in Austin, Texas. This conversation's material and language may not be appropriate for some listeners.

Earlier this year, a Toronto police officer said women should "avoid dressing like sluts" to evade being sexually assaulted. The remark sparked uproar. In April, the first 'SlutWalk' march occurred in Toronto, Canada. The movement has spread across the world, including the U.S. To learn more about this march and its purpose, Michel Martin speaks with Heather Jarvis, co-founder of the first 'SlutWalk,' and Anna Fry, an organizer of the upcoming walk in Austin, Texas. This conversation's material and language may not be appropriate for some listeners. 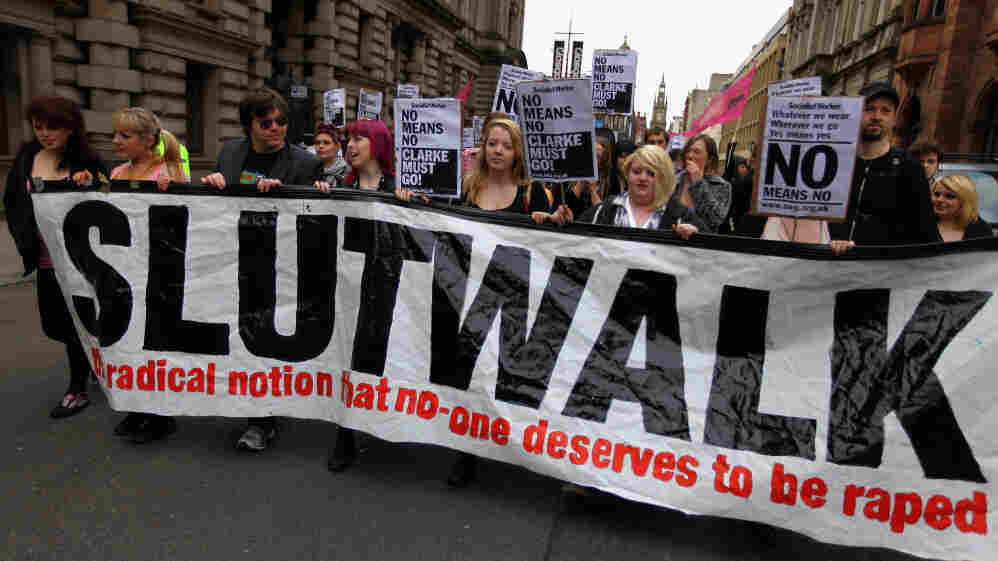 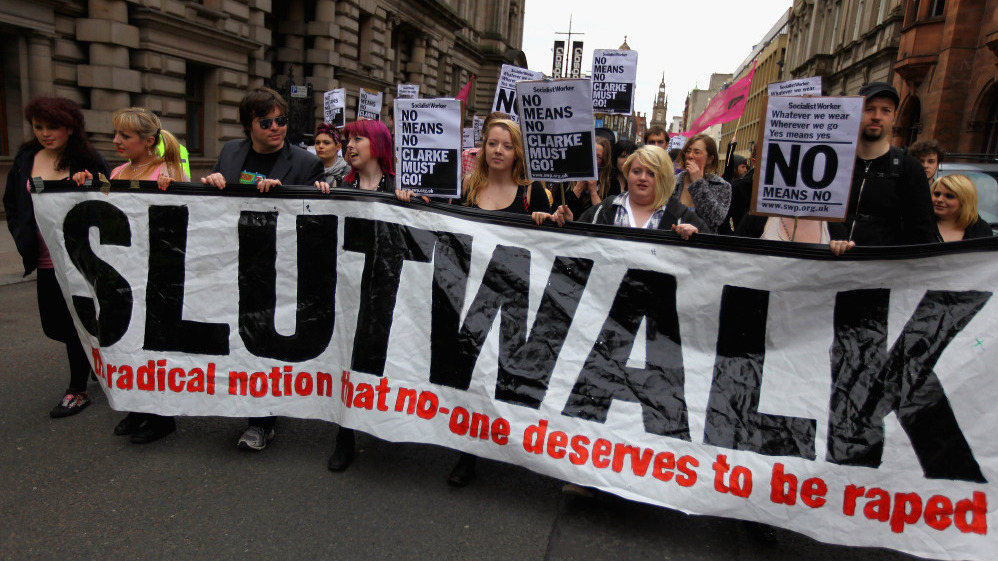 Demonstrators march in the 'Slutwalk' in Glasgow, United Kingdom on June 4, 2011

MICHEL MARTIN, host: I'm Michel Martin and this is TELL ME MORE, from NPR News.

For the next couple of minutes we're going to talk about a word and a movement that has recently arisen around that word. And the word is one that some people, possibly many, consider inappropriate, but others think describes something that needs to be discussed. The word is slut.

The word actually dates to the Middle Ages. And English majors may remember that you actually find the word in Chaucer. Originally it seems to have meant somebody who is dirty or unkempt, but has come to mean a promiscuous woman. And just as some young African-Americans say they're using the N-word to relieve it of its power, to wound and demean, some young women say they're using this word for the same reason. We're going to talk about that in a minute.

But you might be asking, why are we talking about this at all? Well, earlier this year in a safety briefing at Canada's York University, a Toronto police officer said that to avoid being sexually assaulted, women should, quote, "avoid dressing like sluts." That caused an uproar. Now, that officer later apologized, but a movement was born.

In April, the first SlutWalk protest took place in Toronto with some 3,000 marchers. That movement has since spread to the U.S. and across the world, including marches in London and Brazil. Here's a clip from that very first march in Toronto on April 3rd.

MARTIN: We wanted to hear more about this, so, first, we called upon Heather Jarvis. She's the co-founder of the first SlutWalk in Toronto. She joins us now from Guelph, Ontario. Heather, thanks so much for joining us.

HEATHER JARVIS: Thanks for having me today.

MARTIN: We also have with us Anna Fry, one of the organizers of the SlutWalk taking place this week in Austin, Texas and she joins us from NPR member station KUT in Austin. Anna, thank you so much for joining us also.

MARTIN: Heather, let me start with you. Were you there to hear the police officer's remarks and if you weren't there, how did you hear about it?

JARVIS: I wasn't there. I heard about it when the York University newspaper, Excalibur, wrote about it. And in February, the comment was made at the end of January, and in mid-February I heard about it and I was just - I had really had enough of this kind of mentality, especially when it's being projected by people who are sent out to protect us and who should know better.

MARTIN: So how did the idea for the SlutWalk come about? And how does it work?

JARVIS: It came about pretty quickly. This was not just one comment and one bad apple. This idea is very, very common that somehow people who experience sexual assault do something to attract it, are asking for it, or even deserve it. And that's not OK. And it's not the case. So we decided to go down to Toronto police headquarters and tell the Toronto police that we had had enough and we demanded better and we wanted to raise awareness about these issues. So we decided to call it a SlutWalk to use a language that the police officer used against us and throw it back at them.

MARTIN: So did you dress up or was there some specific visible statement aspect of it or is it you just decided, you know, we're just going to go down there and give them a piece of our minds?

JARVIS: It's the latter. What a lot of people, I think, find misleading and don't care to investigate is they think this is about a bunch of people dressing up and parading down the street in a stereotypical aesthetic. And for some people they do come up wearing a certain outfit that is a form of protest - protesting with their bodies. Whether it's wearing a slogan, writing across their bodies or showing skin, but we encourage people to come as they were and come as they were comfortable.

MARTIN: Anna, what made you decide to organize a similar event in Austin?

FRY: The other organizers in Austin and myself originally read about the SlutWalk in Toronto immediately after it happened and noticed that there were other grassroots organizers all over the country and, in fact, all over the world who were starting to organize in their own communities. And as Heather said, the language that was used the law enforcement official in Toronto is not a unique case. This is a pervasive idea. And I think that it really resonates particularly with young women.

MARTIN: I'd like to ask you to speak for a minute to those who really don't understand what the problem is, who feel that the Toronto police officer was just using common sense to say, well, gee, you know, some attire seems to attract more attention than others. Or seems to put out a message there that you're available for, you know, sexual involvement. So, could you speak to that for a minute?

MARTIN: Anna, why don't you start?

FRY: Sure. Well, I think that slut and other words that are traditionally considered slurs are very, very powerful because they're used to dismantle the credibility of victims. And using a victim's perceived sexuality, whether that is pointing to perhaps their sexual history, the way that they're attired isn't the only way that that happens, but it's a very common one and that resonates strongly with women.

And so I think that language, for example, using the word slut is a really finite way to talk about the very complicated myths that surround sexual violence and victim blaming and to begin taking them apart.

MARTIN: Heather, what about you? What's your message to people who say, well, yeah, but you're inviting a certain kind of attention by dressing a certain way. Why isn't that common sense? What do you say to that?

JARVIS: I would echo a lot of what Anna has said. Very often what the commentary is is of course nobody deserves to be assaulted, but you had it coming to you, but you have to acknowledge that you kind of asked for it and put it out there. And clothing is not consent. Consent is something that needs to be freely given and not forced.

And, also, this idea that people get sexually assaulted more often when they're wearing less clothing is a myth. It does not hold true. Studies, statistics, survivor stories, even interviews with rapists illustrate that this is not the case.

MARTIN: Anna, you mentioned that when we were talking about this earlier, that you were planning to bring your daughter to the event this weekend and she's a young girl, why do you think she needs to be there?

FRY: As a parent, I'm interested in teaching consent as a core value to her. I think it's the basis for mutual respect in all relationships and shouldn't be construed as something that pertains to sexuality alone.

JARVIS: Absolutely not. This has been a big surprise. And although we were very aware that victim blaming and shaming around sex and sexuality is very prevalent around the world, we did this. And I remember saying to some friends, you know, in the first few days of planning this, wouldn't it be amazing if 100 people came?

Because that's what I thought would be amazing. And that amazement has been trumped time after time when we had 3,000 people out in Toronto. And then hundreds of people and thousands of people around the world who are finding support in this - survivors of sexual violence, who are sharing their stories and coming out and saying, no, it wasn't my fault. And I've been told so often that I was dirty or I was wrong or I did something to deserve this and I didn't.

MARTIN: And, Heather, what's next?

JARVIS: Oh, what's next? We're trying to keep the conversations going. Try to get people to realize what this is actually about and next year in Toronto, because we had such a great support and turnout, we're going to have a SlutWalk again in Toronto next year.

MARTIN: And, Anna, what are you hoping for this weekend in Austin?

FRY: We've been really excited by the community response that we've received. And we're expecting more than 1,000 people on the steps of the state capitol here in Austin. And we have been extremely excited by the way that an activist base has really come alive and taken action in our city in a way that we haven't seen before.

MARTIN: Anna Fry is one of the organizers for the SlutWalk in Austin, Texas, which is scheduled to take place this weekend. She was kind enough to join us at NPR member station KUT in Austin. Heather Jarvis is the co-founder of the original SlutWalk in Toronto. She was kind enough to join us from Guelph, Ontario. Thank you both so much for joining us.

FRY: Thank you for having me.