Accessibility links
Activists Reclaim Use Of The 'S' Word The 'SlutWalk' movement's popularity is sparking debate about the use of the word 'slut'. It is usually considered a derogatory term for women. But some say embracing the word helps remove its negative connotations. Host Michel Martin speaks with Rebecca Traister, author of Big Girls Don't Cry: The Election that Changed Everything for American Women, about the word's usage and how a new generation of activists are trying to reclaim it. This conversation's material and language may not be appropriate for some listeners.

The 'SlutWalk' movement's popularity is sparking debate about the use of the word 'slut'. It is usually considered a derogatory term for women. But some say embracing the word helps remove its negative connotations. Host Michel Martin speaks with Rebecca Traister, author of Big Girls Don't Cry: The Election that Changed Everything for American Women, about the word's usage and how a new generation of activists are trying to reclaim it. This conversation's material and language may not be appropriate for some listeners. 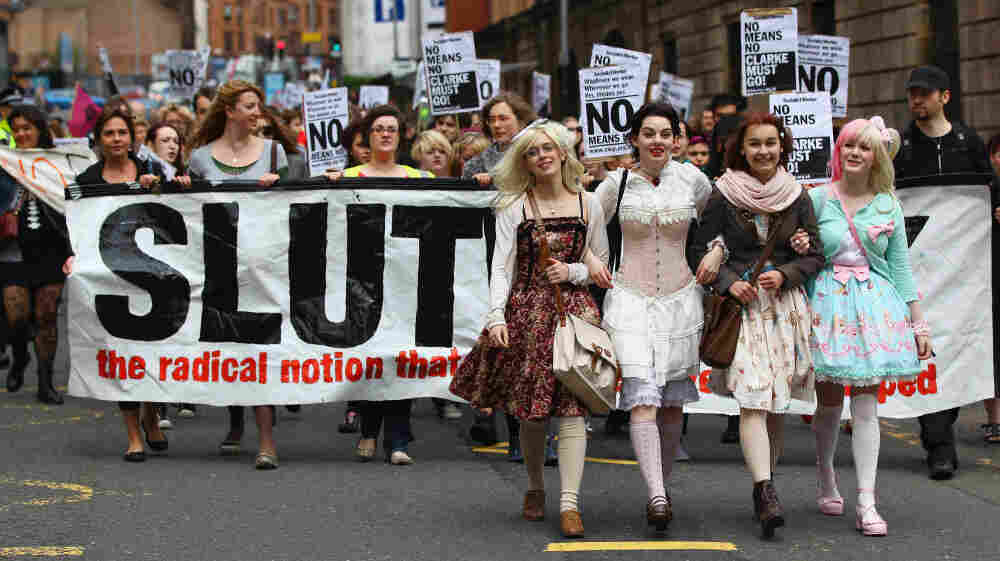 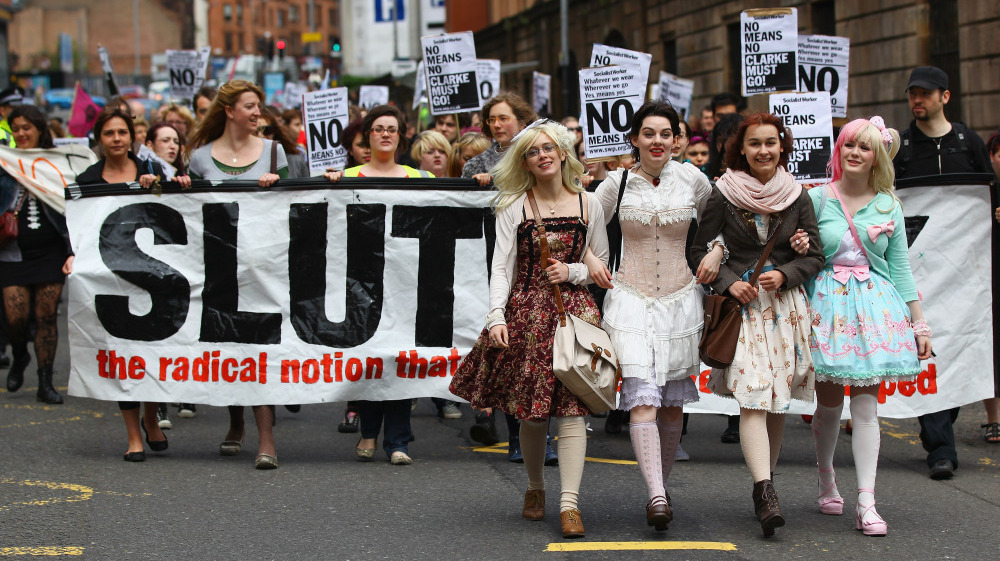 Demonstrators of the Slutwalk march on June 4, 2011 in Glasgow, United Kingdom.

MICHEL MARTIN, host: We wanted to spend a few more minutes actually talking about the word slut and we do recognize that many people find it offensive and a slur. And, also, a lot of people thought that that word was actually retired. But it seems to have found a new life of late. MSNBC host Ed Schultz just returned to the air this week after he was suspended for making these remarks on his radio show.

ED SCHULTZ: I mean, we're in this severe weather pattern right now. Rain, severe thunderstorms, winds getting whipped up to tornados of horrific proportions. And what are the Republicans thinking about? They're just thinking about how much this is going to cost. Like this right wing slut, what's her name? Laura Ingraham? Yeah, she's a talk slut.

MARTIN: We wanted to talk more about this word that can cause an anchor to get booted from the air, but we're also interested in how the young women we just heard are using it. Is it a word to be reclaimed? To get at these questions, we've called on Rebecca Traister, author of "Big Girls Don't Cry: The Election that Changed Everything for American Women." She's thought a lot about these issues and written a lot about them for Salon.com, among other outlets. And she's on the line with us today from Brooklyn, New York. Welcome, Rebecca. Thanks for joining us.

REBECCA TRAISTER: Thanks for having me.

MARTIN: I wanted to talk a little bit more about - for just a minute about the fact that Ed Schultz was suspended for this. And it was interesting to me that progressive women's groups were among those who were advocating that he be suspended for that. Do you think that that was an appropriate punishment? Explain why you think so.

TRAISTER: Well, I think - I don't know if I can speak to how appropriate that particular punishment was. I mean, you've seen a lot of this recently on MSNBC with Keith Olbermann, with Ed Schultz. You've seen some of it on NPR. I mean, we're really in a world in which we're beginning to police the language of the media and offering all different kinds of punishments. And I don't know that any of us can talk about exactly what's appropriate or what works or what speaks to the language crime in question.

MARTIN: OK, well, that's fair. But then just talk to me about the word, if you would, too, and the - sort of use of it presently. And I'm interested, too - I think everybody understands that the word has been used - you know, it started out to be one word, and now it's kind of used to kind of shame women around their sexuality, and we get that. I'm interested in, you know, you hear younger African-American women split over the N-word, right...

MARTIN: ...and some saying, OK, we should be able to use this word if we want to, because this deprives it of its power. And I'm wondering if you feel the same way about the S-word.

TRAISTER: Well, it's complicated with the S-word, with slut, because, in fact, slut has always had the same meaning. You know, since the 15th century, slut has meant - has been used as a derogatory and dehumanizing word to describe a certain kind of woman, a woman - and what we're objecting to, here, we're not trying to reclaim the word. It's not as though it was once a neutral word that has - that was perverted, and that we are trying to, you know, reclaim.

What activists are objecting to here is actually the idea that that word expresses, a contempt for women, and especially sexually women, and in this particular case, women who dress in a certain way. So it's a very complicated project. And one of the objections to it has come from many women and men of color who say, wait a minute. Reclamation of these words has not exactly worked for us. And there is this discussion over the N-word, and there are some people who feel that reclaiming it, using it conversationally in entertainment, in comedy is a powerful statement.

And there are others who say, wait a minute. That hasn't stopped people from deploying it negatively and harmfully against us. And that's one of the arguments that's being used by people of color against the idea behind the SlutWalk, which is that by taking this word and using it, rallying around it, it's not actually going to keep people - whether it's Ed Schultz or whether it's a cop in Toronto - from deploying it against women.

TRAISTER: Well, I completely applaud the movement. I mean, listening to the interview with Heather and Anna, how can you not? Here are young women - this is - and Jessica Valenti is a feminist activist who pointed this out in The Washington Post: This is one of the most active, vibrant, exciting forms of protest we've seen within a feminist movement in decades.

These are grassroots organizers. These are not big organizations that are printing out signs. These are young women who obviously feel very strongly about the way that their sexuality is being policed and discussed, and about - and feel very strongly about victim-blaming at the root of their (unintelligible). And they are coming out in droves. And that is thrilling news for anyone who cares about gender equity and the feminist movement in the United States.

I do - there are lots of complicated questions about SlutWalk. Among them, some of the questions raised by men and women of color who say they feel like this is not a movement that embraces them. I think there is a risk in rallying around a word like slut, that you alienate some - and having it be a big part of feminist activism, you have it alienate some women who don't feel that they can relate sexually to that term, whether, you know, by action or by clothing. You alienate some women who come from communities or families or religions or traditions that would have a hard time with them rallying around that word, even if they fundamentally believe in all the ideas that the activism itself is supposed to represent.

MARTIN: Well, no, and I think you're making an important point, because the part of the activism is that most of the activism isn't directed at the word. The activism is about the idea that what you wear somehow determines whether you can be assaulted or not. So I think that they were trying to be very clear about that, but the word itself is part of it, since they chose to use it.

I came across a blog posting by a woman named Sarah Langford. She's a feminist activist in Australia. She writes: Never mind the word slut. Let's reclaim woman. She writes, women calling one another - she used the B-word, I'm going to - slut or hooker makes light of woman hatred. These words have been, and continue to be used to keep women in their place as less-than-human in a male-dominated society.

And she says she thinks a more fruitful project would be reclaiming the word woman. What do you think about that?

TRAISTER: Well, I love the idea behind it. And I'm always trying to put women at the center of moral arguments, you know, about politics and reproductive rights and equality. But I would also say that if we were talking about woman walks, well, we probably wouldn't be talking about them right now.

There is an electric value to choosing a controversial word. And the fact is, if young women were going around the country staging woman walks right now, they'd be getting much less attention than they are staging SlutWalks. And there's a real value to that.

MARTIN: Finally, do you have some thoughts about - is there, given all your ambivalence and that of other people about the word itself, is there a way that you think that the point could be more effectively made about the idea that, you know, what you wear isn't determined whether you are - whether it's OK that you should be free from assault or not? Is there a way that it could be more effective, do you think?

TRAISTER: Well, there are a million ways that you can communicate this: conversationally, in writing, in direct communication. The activism, I actually do, for all my ambivalence and qualms about it, the activism is effective in that it's bringing out a lot of people. It's bringing out a lot of attention. It's prompting conversations like this one, where you do elucidate the idea, which is the important part.

And the fact is, activism isn't perfect. I mean, you look at a feminist movement that historically has been riven by racial inequalities, a civil rights movement that was riven by gender inequalities. Activism is an imperfect peace. And so this is an imperfect form of activism. But I think it's drawing a lot of attention to the issue. And so while we should be talking about our qualms with it, we should also recognize that we're talking about it, and that, in itself, is effective as a form of public protest.

MARTIN: All right. Rebecca Traister is author of "Big Girls Don't Cry: The Election that Changed Everything for American Women." She was nice enough to join us by phone from her home office in Brooklyn, New York. Rebecca, thanks so much for joining us.

TRAISTER: Thank you so much for having me.