Accessibility links
Movie Review - 'The Trip' - Two Guys On A Road Trip, Racking Up The Comic Mileage Real-life friends Steve Coogan and Rob Brydon annoy each other on a foodies' pilgrimage across the English countryside in The Trip, a laugh-riot lark from director Michael Winterbottom. (Recommended) 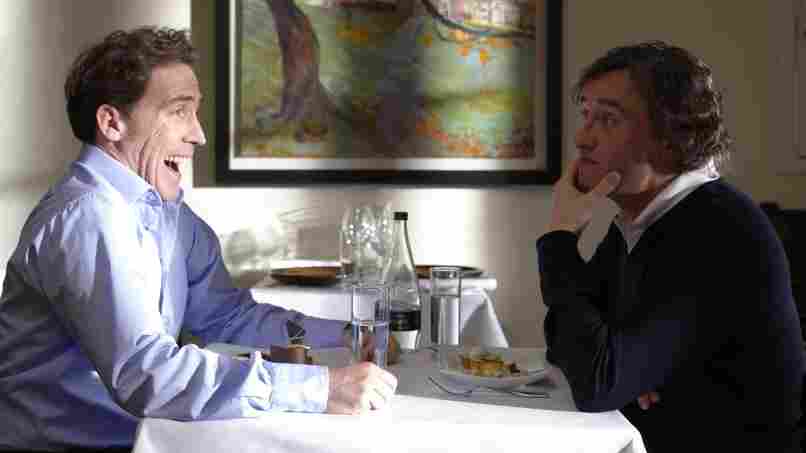 Friendly Fire: Steve Coogan (right) takes his friend Rob Brydon along on a newspaper assignment to sample fine food at Britain's country inns — though in the end the two spend more time acting the fool than they do appreciating the culinary arts. Phil Fisk/IFC Films hide caption

As the opening credits roll, the dyspeptic Coogan is telling his considerably more easygoing colleague that he has landed a magazine assignment as a celebrity food critic. He's to spend a week visiting Britain's country inns, then report back to The Observer. Coogan thought his girlfriend, a real foodie, would go with him, but she bailed; not wanting to go alone, he's asking Brydon, letting it drop that he has already asked several others who've declined.

Who could resist so gracious an invitation? Brydon gets permission from his wife, and in short order they're off, driving and dining and making wisecracks, mostly while doing spot-on impressions of bigger celebs. Spot-on dueling impressions, too, of Sean Connery, Woody Allen, Robert De Niro, Al Pacino, Winston Churchill, Stephen Hawking and most impressively Michael Caine. In the space of perhaps 45 seconds, Brydon traverses Caine's whole vocal career from Alfie to Alfred, seductive high to Batman-butler low, nasal to breathy. It's quite the tour-de-force.

The food they're mostly ignoring during their duels is downright architectural, and looks delicious, though that doesn't keep Coogan from complaining that his selections don't seem as interesting as his tablemate's. The screen Coogan is a bit of a diva, actually, prickly about everything from his cellphone signal to the one hotel where it looks like they'll have to share a room.

The filmic Rob Brydon, by contrast, is comparatively cheery — ordering scallops everywhere they go (though no one ever comments on that fact), suggesting edifying little poetic side trips, and at night trying to talk his wife into a bit of phone sex, initially in Hugh Grant's voice.

Director Michael Winterbottom, best known in the U.S. for such weightier fare as Welcome to Sarajevo and The Road to Guantanamo, lets a little seriousness seep in at times, but he's mostly just having a lark in The Trip, which he's excerpted from a six-episode British TV series he made with Coogan and Brydon last year. 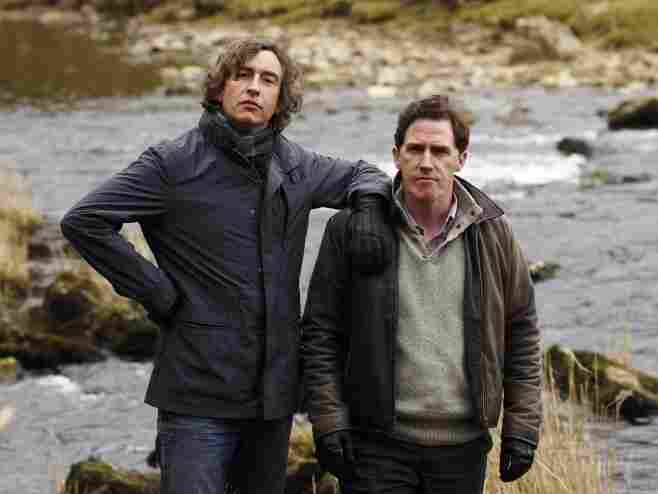 Coogan and Brydon turn out to have a knack for dueling celebrity impersonations — and, in particular, to know their way around a solid Michael Caine impersonation. Phil Fisk/IFC Films hide caption 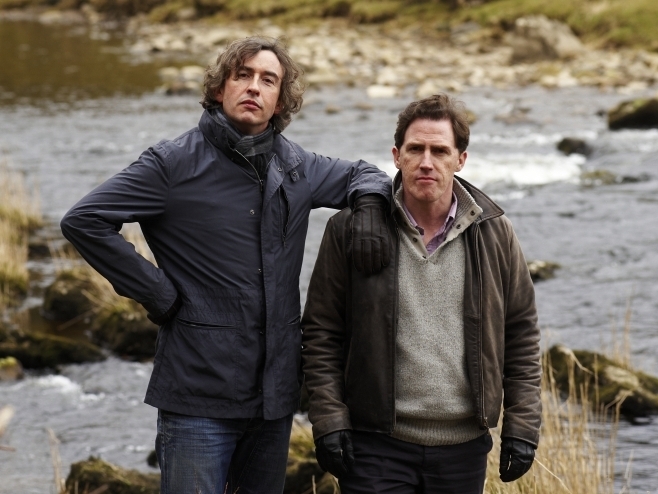 Coogan and Brydon turn out to have a knack for dueling celebrity impersonations — and, in particular, to know their way around a solid Michael Caine impersonation.

The two actors also played themselves as actors in Winterbottom's Tristram Shandy: A Cock and Bull Story a few years back, and the improvisational rapport they exhibited there has blossomed into a pretty seamless partnership, whether they're blanching at the made-up eulogies they'd deliver at each other's funerals or letting their imaginations run riot, dreaming up dialogue for the costume epics they'd love to film in the rolling hills they're driving through.

Not sure when I lost it and started laughing at absolutely everything they said, but by the time they were singing ABBA songs at the top of their lungs, I was gone. These guys are a hoot, and The Trip is a trip and a half.