Accessibility links
How To Put A New Element On The Periodic Table Two new elements were officially added to the periodic table this month, after being approved by an international panel. The complicated process took years; now elements 114 and 116 just need official names. 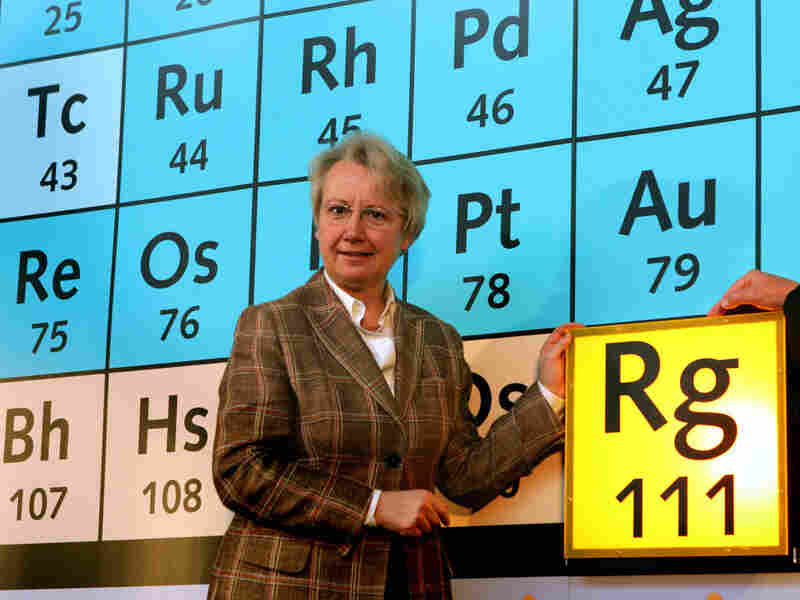 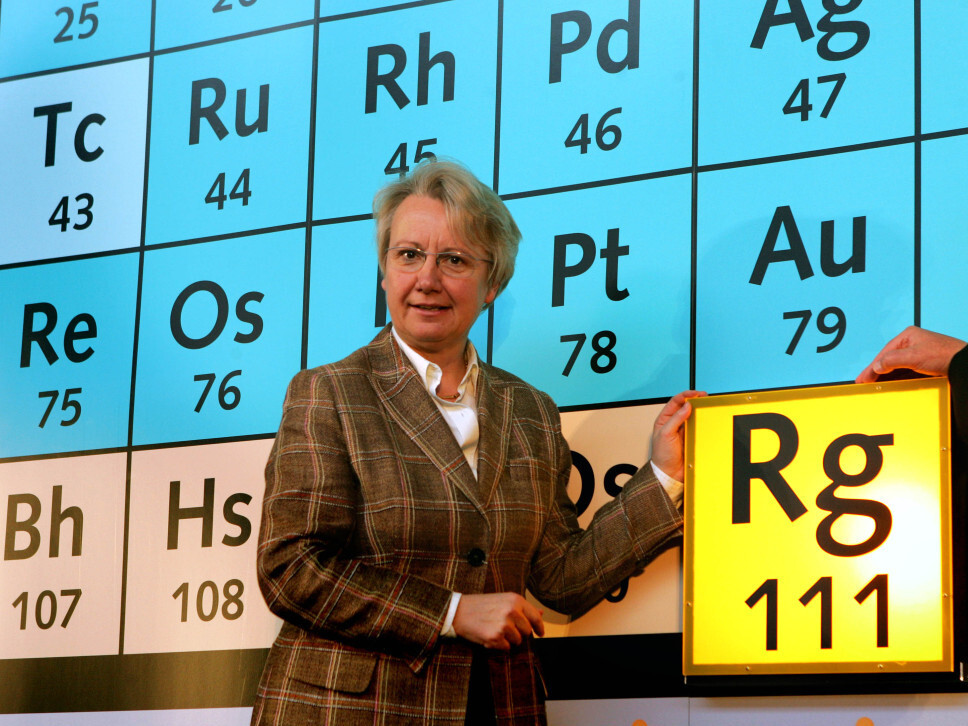 In 2006, element 111 received its official name, Roentgenium. The element's square on the periodic table was unveiled by German science minister Annette Schavan.

Two new elements were officially added to the periodic table this month. The elements were discovered years ago, but they needed approval from an international committee before they could be placed on the famous chart. We asked Ian Chillag and Mike Danforth, producers of NPR's Wait Wait, Don't Tell Me and hosts of the podcast How To Do Everything, to explore how the process works:

How To Make A New Element

For starters, elements 114 and 116 don't occur in nature. So don't look for them in your backyard. That's because they were made in a lab. Which may seem like cheating, but that's how it's done these days.

We called up Paul Karol, chair of The Joint Working Party for the Discovery of New Elements, which gave official approval to the elements, to find out how the process works. And he offered a great explanation that was really long and complicated, so we'll summarize it thusly:

Now, before you go off smashing atoms together, please note that it's not as easy as our incredibly oversimplified explanation makes it seem. With elements 114 and 116 in particular, the end product is tiny — and exists for less than a second before it decays away.

So, it's not like you have a chunk of metal to show off. Instead, you get pages and pages of computer data from advanced sensors.

"These two species combine perhaps once out of a billion billion collisions," Karol says. "That's a billion billion. The experiments usually last for a month, and maybe they get one or two indications they've made something of interest."

So once you pull off your one-in-a-billion-billion shot, other scientists have to check your work by doing it again. You can see how this process could take a while. 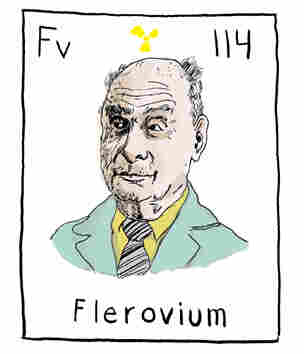 One of the rumored names for element 114 is Flerovium, after Soviet scientist Georgy Flyorov. Justin Witte/TinyMarkers hide caption

Once Karol's committee decides your element is legitimate, you get an invite from IUPAC to give your element a real name.

Since their discovery, elements 114 and 116 have been going by the placeholder names ununquadium and ununhexium. And chemists have been gossiping about possible names for the new elements.

As Sam Kean, author of The Disappearing Spoon, a book about the periodic table, says, "From some of the whispers I've heard, they're going to name one of the elements after a scientist named Georgy Flyorov, and another after Moscow."

Chemist Ken Moody will likely be among the first to know the new names. He works on the Lawrence Livermore National Laboratory team that discovered elements 114 and 116, in conjunction with a Russian team.

"One of the players on my team named Hanna told me I need to name it Hannaium," Moody says. "And Nicole wanted it named Nicolium. No matter what it gets named, there are going to be a whole lot of little girls that are disappointed."

Fun And Intrigue With The Periodic Table

An Old Dispute, And A Proposal

The naming process can get competitive. During the Cold War, labs from the United States and the Soviet Union both claimed to discover the same new element. Scientists refer to the decades-long naming battle that ensued as "The Transfermium Wars."

It was kind of like Star Wars, except instead of Darth Vader and Chewbacca fighting over the fate of the galaxy, it was the Russians and Americans fighting over whether to call an element Kurchatovium or Rutherfordium. And there were fewer light sabers. Finally, in 1997, IUPAC stepped in, and Rutherfordium won.

(Why Rutherfordium and Kurchatovium? Ernest Rutherford was a New Zealand-born, Nobel Prize-winning pioneer of atomic research. Igor Vasilyevich Kurchatov was a Soviet nuclear physicist who guided the development of the Soviet nuclear program, from atom bombs to nuclear reactors.)

That prompted a question for Paul Karol: Could we be on the cusp of an era of selling corporate naming rights to new elements?

"I hate to say I can't envision it, because I've been surprised too many times," he says, "and I've also heard the expression, 'Everyone has their price.'"

"Possibly," Karol says. "Unless Doritos gets there first, right?"

Producer Blythe Haaga contributed to the reporting of this story.