Accessibility links
Tragedy And Comic Structure In The Tony-Nominated 'The Normal Heart' Critic Mark Blankenship looks at the multiple Tony-nominated Broadway revival of Larry Kramer's The Normal Heart, which is a heart-tearing drama with intriguing elements of comic structure.

Tragedy And Comic Structure In The Tony-Nominated 'The Normal Heart'

Tragedy And Comic Structure In The Tony-Nominated 'The Normal Heart' 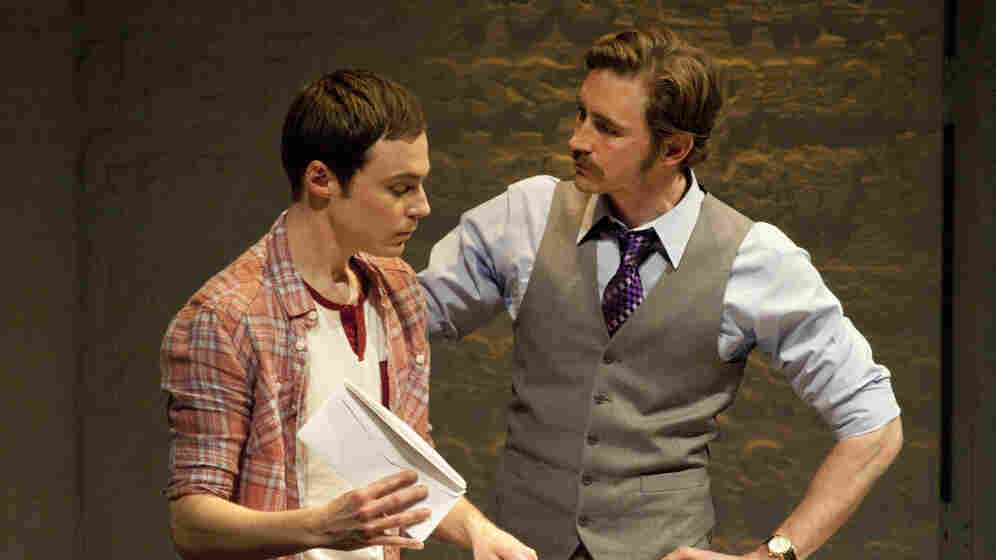 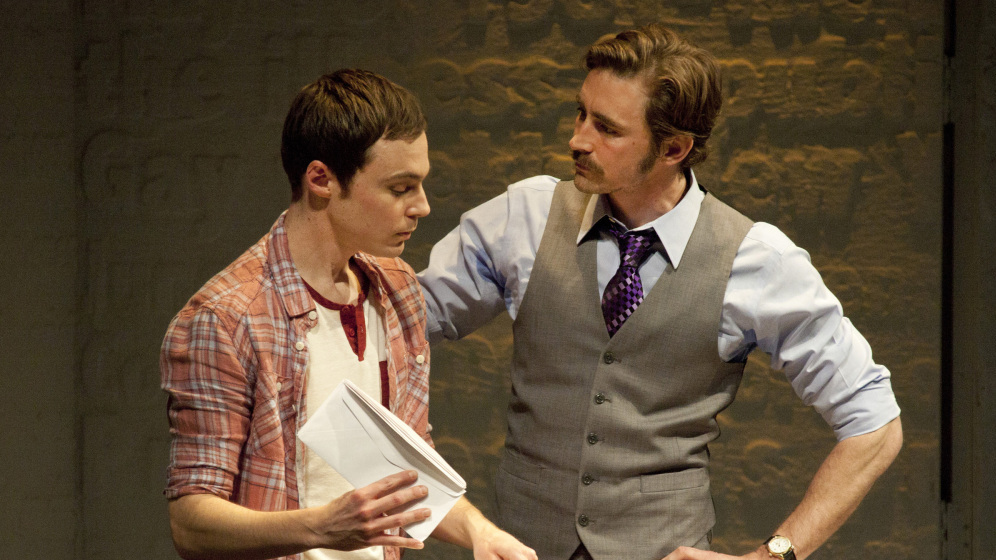 Jim Parsons as Tommy Boatwright, left, and Lee Pace as Bruce Niles, in the Broadway revival of Larry Kramer's The Normal Heart.

The Normal Heart is almost comic, which is one reason it's so devastating.

But when I say "comic," I don't mean "funny." Larry Kramer's 1985 play is passionately serious, staging the fear, anger, and desperation that tore through New York City's gay community at the beginning of the AIDS epidemic in the early '80s. With thundering rhetoric, Kramer, who was one of the first major AIDS activists, lashes out at everyone from homophobic politicians to promiscuous gay men to hectoring killjoys like himself, and then he counters those arguments with equally forceful rebuttals. The result is a play that kicks you in the chest, animated by messy, intelligent debate.

The current Broadway revival — which is poised to win several trophies at Sunday night's Tony Awards — underscores the power of Kramer's anger. We feel the arguments as much as hear them, and critics have rightfully praised this political fire. In Time Out New York, Adam Feldman says the production is "raw, scary and galvanizing," and Ben Brantley of The New York Times says it demonstrates how the ongoing AIDS crisis can make people "noble and craven and hysterical and heroic."

But if The Normal Heart were all politics, it wouldn't work on stage. Brantley points out that it's "a far better play than you might have thought," which also struck me when I saw it last month. Underneath the anger, there's a sophisticated dramatic structure.

And that structure is almost comic.

In the broadest terms, comic narratives begin with society in disorder and end happily when order returns. Often, the new stability is represented by a marriage and by the ejection of something that embodies chaos

Shakespeare's Twelfth Night, for instance, begins with disorder in Illyria, since no one in the ruling class can choose whom to marry. But everyone does get married eventually, just moments after Malvolio, a character who brazenly strives beyond his class, gets run out of town. With everyone settled in a comfortable role, order returns.

The comic rules are flexible, of course, and they get broken all the time. But they're useful in understanding why certain narratives have so much power.

Take the penultimate scene of The Normal Heart, when Ned Weeks, the AIDS activist/Larry Kramer stand-in, marries his partner Felix. It's a major moment, because Ned has spent the entire play terrified of commitment, yet Felix has stayed by his side. Their marriage is beautiful, powerful, and could almost restore order to a chaotic universe where gay men struggle to love and be loved in the face of fear and disease. Their marriage could almost provide the stability of union to the fractured community on stage.

Except Felix has AIDS, and he's already in the hospital, and it's the early 1980s, so there's just no hope. Seconds after saying "I do," Felix dies.

As soon as he goes, the comic structure collapses. AIDS, the bringer of so much disorder, cannot be ejected from the play. Instead of a celebration, Ned and Felix's marriage becomes a heavy-hearted tribute to men who keep chasing happy endings, even when they can't be attained. It's both futile and furious, hopeless and hopeful, and it's as much a battle cry as any of Kramer's speeches. The marriage physicalizes the gay community's stubborn insistence on being human, on finding life in a galaxy of death, and it tells me something true about being brave.

I realize most people don't sit in a theatre thinking about archetypal comic structures, but on some level, we can all feel these narrative moments. Comic and tragic tropes are woven so deeply into our culture that we understand them on a molecular level, and when a play like The Normal Heart upends our expectations of how a story works, it can reach beneath our skin. It can deepen a political message with the power of exceptional drama.