Accessibility links
Vampire Weekend, Yeasayer, More at SXSW Vampire Weekend's self-titled debut is a charming piece of Afropop-flecked indie-rock. Its tones are as starch-clean as Vampire Weekend's Oxford shirts, and its melodies as perky as popped collars. They perform with Bon Iver, Yeasayer, Jens Lekman and Shout Out Louds at SXSW. 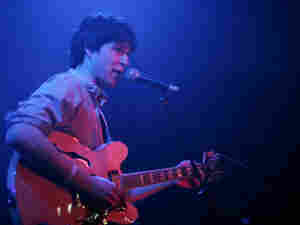 Is Vampire Weekend this year's Strokes? Or this year's Tapes 'n Tapes? The blog hype surrounding the recent Columbia University grads has been enough to start a backlash against the backlash against the backlash. However listeners perceive it, Vampire Weekend's self-titled debut is a charming piece of Afropop-flecked indie-rock. Its tones are as starch-clean as Vampire Weekend's Oxford shirts, and its melodies as perky as popped collars. Hear the band perform a concert at SXSW, webcast live on NPR.org from the Parish in Austin, Tex., on Thurs., March 13.

Bon Iver is a pseudonym for singer-songwriter Justin Vernon. His debut CD, For Emma, Forever Ago, provides a comforting wash of gently strummed guitars,set against distant atmospherics and layered harmonies that echo through the ether. Vernon wrote the songs while living in a remote cabin one winter in northwestern Wisconsin, where he'd gone to exorcise some inner demons. For Emma, Forever Ago perfectly captures the isolation and chilly heartache of the period in which it's recorded.

Yeasayer filters the rhythms of Talking Heads through a fish-eye lens, picks up a Roxy Music record, and heaps on the energy of a gospel choir. The Brooklyn band's debut, All Hour Cymbals, artfully layers tribal drums, atmospheric overtones, and steady funk basslines in a natural and exciting way.

Recorded on just two microphones, A.A. Bondy's solo debut, American Hearts, is full of darkly sardonic songs. The former Verbena frontman leaves behind the rock crunch of his former band for bluesy folk songs about damnation and salvation. It ends up somewhere between Bob Dylan and Ryan Adams, wrapped in flannel shirts and muddied boots.

When a twentysomething musician makes records that sound more like Burt Bacharach or Harry Nilsson than anything else, it's going to reek of either pretension or cheese. In Jens Lekman's case, it's both — and, surprisingly, the result is delightful.

The Swedish singer-songwriter knows when his tongue is firmly planted in cheek. Many moments in his latest album, Night Falls Over Kortedala, are so ridiculously over-the-top that listeners can't help but laugh. While he crafts his music with impeccable care, the great part is that Lekman's pretty obviously laughing, too.

Can anyone out-Cure the Cure? Listen to a song like "Impossible" from the Shout Out Louds' Our Ill Wills, and that song title is obviously far from the right answer. With its cheery melodies, coy vocals, and bedroom-dance-party rhythms, the Swedish indie-pop quintet finds more infectious joy in its music than the Cure's Robert Smith ever did.