Accessibility links
Jet Black Crayon: Skating's Smarter Side Where much of Jet Black Crayon's discography piles on atmosphere without worrying much about composition, "8 Bad Years" — with its scratchy post-punk rhythm guitar, hyperkinetic breakbeats, and ominous bassline — feels pointed and purposeful. 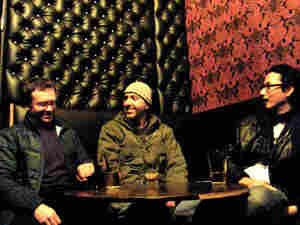 A former skateboard pro who's now a decade into his second life pursuing various streams of instrumental music, Tommy Guerrero is, whether he likes it or not, a grand ambassador for the mature side of skate culture. Having little to do with ESPN or soda ads, it's a svelte niche that often appears more occupied with city life, lowbrow art, film, music, and fashion than with the sport itself.

Under his own name, the guitarist and bassist releases smart, mostly wordless groove albums, with Latin music, soul-jazz, DJ culture, downtempo electronic music, and post-rock enveloped in his own introspective late-night gaze. He collaborates elsewhere and often, the most willfully arty of those groups being Jet Black Crayon with multi-instrumentalist Monte Vallier (of Swell) and turntablist Gadget. From the newly released CD/DVD set In the Interim, "8 Bad Years" is in some ways atypical for the band. Where much of Jet Black Crayon's discography piles on atmosphere without worrying much about composition, "8 Bad Years" — with its scratchy post-punk rhythm guitar, hyperkinetic breakbeats, and ominous bassline — feels pointed and purposeful.

The DVD component of In the Interim, which compiles seven brief independent films scored by album tracks, finds its zenith in skate filmmaker Greg Hunt's supplement to the song. Hunt's short is a knowing, stylized nod to skate history: The shrill colors of VHS and rapid-fire editing evoke the "Bones Brigade" videos Guerrero appeared in alongside Tony Hawk in the 1980s, and there's a sly twist in the narrative that plays off the sport's evolution. If it sounds too clever to come from skateboarding, remember that this community also gave the world Spike Jonze — or, for that matter, Tommy Guerrero.