Accessibility links
Watcha Clan: Controlled Chaos In Concert Though the room was packed with music lovers, many didn't know what to expect of Watcha Clan at Webster Hall in New York City. The French band's globalFEST performance was filled with deep bass and frenetic electronic beats mixing the sounds from around the world in a high energy performance.

Watcha Clan in Concert at globalFEST 2009

Watcha Clan in Concert at globalFEST 2009 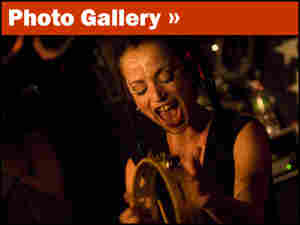 Though the room was packed with music lovers, I wasn't alone in not knowing what to expect. Watcha Clan had only played New York, in fact, only played in the United States once. The group is from the gritty but beautiful city of Marseilles in the south of France.

I knew there would be Arab influences in the music and the beats were electronic. And I'd heard about the charismatic singer Sista K, but it wasn't until it the deep, deep bass and the surprisingly frenetic electronic beats began that I understood that this wasn't gong to be just going to be good, this was going to be great.

Watcha Clan is one of the most exciting bands I've seen on the world music circuit. They were controlled chaos in action — at times sounding Balkan, others Brooklyn and then Egyptian. There were also Moroccan rhythms and Sufi trance mixed with the electronica. For all the reasons I've mentioned this shouldn't work — it should be a mess — but it does. It is the talents of these musicians and their magnetic and charismatic presence that makes it so.

You're in for a treat.