Accessibility links
'Vaclav And Lena' Find Love On A Brooklyn Boardwalk From the moment they meet in New York's Brighton Beach neighborhood, Vaclav and Lena make magic together. Each envisions a lifetime at the other's side — and then, one day, Lena disappears. Their story of love and assimilation sits at the heart of Haley Tanner's debut novel, Vaclav & Lena. 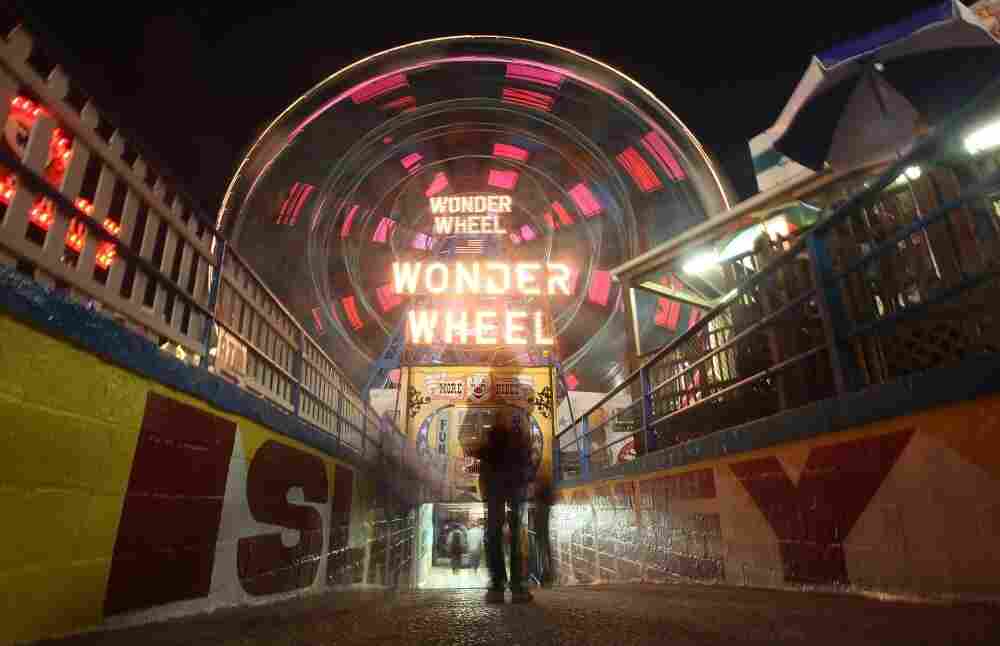 Down On The Boardwalk: Vaclav and Lena, the young protagonists of Haley Tanner's debut novel, have their first play date together at Coney Island's Wonder Wheel. Mario Tama / Getty Images hide caption 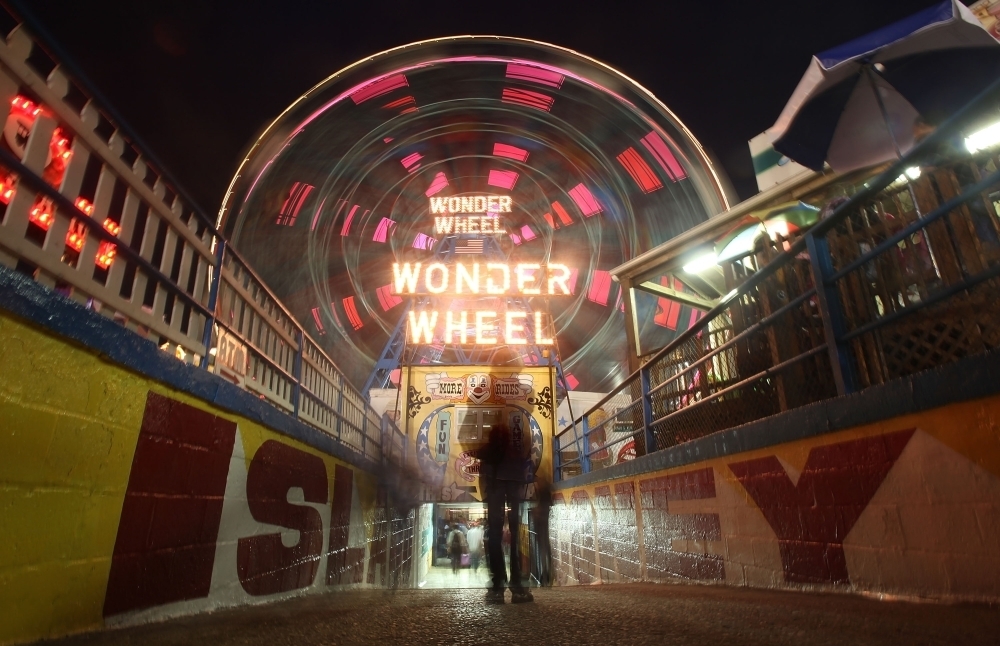 Down On The Boardwalk: Vaclav and Lena, the young protagonists of Haley Tanner's debut novel, have their first play date together at Coney Island's Wonder Wheel.

From the moment they meet, Vaclav and Lena make magic together.

They're the children of two Russian immigrant families living in Brooklyn's Brighton Beach neighborhood. Vaclav is clever, quick and eager to become American; Lena is anxious and shy. Vaclav learns magic tricks, and performs shows in their neighborhood; Lena stands by as his assistant. She cherishes his boldness; he treasures her sweetness. They imagine a life together — and then, one day, Lena disappears. 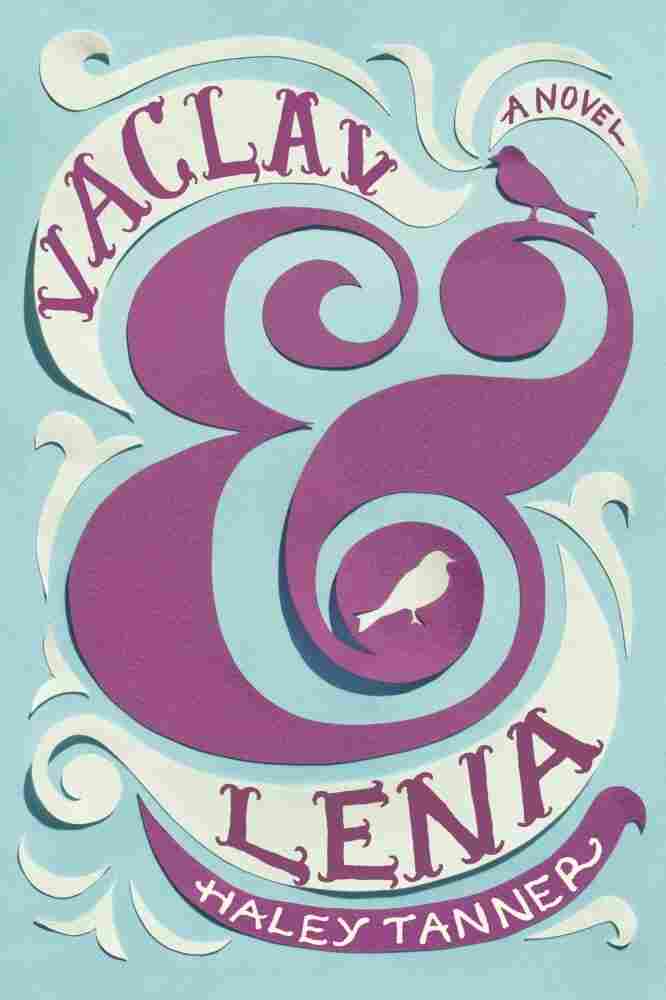 The story of Vaclav and Lena's love, loss and assimilation sits at the heart of Haley Tanner's debut novel, Vaclav & Lena.

Tanner tells NPR's Scott Simon that the main characters came to her like something out of Vaclav's beloved Magician's Almanac.

"I sat down to write for a class, and of course I was almost overdue on a deadline and it was midnight and I had a story due the next day," she says. "And these characters, Vaclav and Lena, just jumped up and started their magic act, and then I couldn't let them go."

Vaclav and Lena meet in an ESL class when they're 5 years old. Together, they learn to navigate their new American world, an experience Tanner says encapsulates Brooklyn, N.Y., and what it means to be American.

"This immigrant experience is not a moment on the way to becoming a full, assimilated American," she says; it's the experience of being an immigrant and the process of assimilation that is, in itself, uniquely American.

Those experiences play out daily in Vaclav and Lena's lives, from Vaclav's struggles with English to their first play date together at that ultimate symbol of Americana — Coney Island's Wonder Wheel.

Through all the twists and turns of the book, the most enduring theme of the novel is love. Tanner, whose husband died from metastatic melanoma just months before the book's release, says her inspiration for Vaclav and Lena's great love came from personal experience.

"I had love like this when I was writing the novel," she says. "This is my husband; my husband is on every single page of this book."

Vaclav and Lena turn off the big-screen television in the living room. They push the big mahogany coffee table back against the wall; it is a perfect stage, black and solid and shiny. They have moved the coffee table this way many times, it is easy to push across the big threadbare persian rug.

Vaclav and Lena stand on stage, waiting for the audience to take their seats.

"DAD," Vaclav shouts, "Come on, we're ready!" Rasia is already sitting on the big black leather sofa, waiting for the show to start. Vaclav's father comes in with a glass of vodka in his hand and sinks down into the sofa.

"Okay, so I am here. What are we watching. What are you going to show." Vaclav's father says.

"First, welcome to my lovely and intellectual audience. Lady, and gentleman, you are in for quite a surprise. I am Vaclav the Magnificent, and this,my assistant, the Lovely Lena," Vaclav swings his left arm out to indicate Lena, who takes a long, deep, serious bow.

Vaclav and the audience wait in silence for her to return to an upright position.

"Tonight we have for you a special treat which will astound and amaze you. May I please, from the audience, give someone the honor of volunteering a quarter to give to me to be involved in a magical trick?"

"This is scam," says Vaclav's father.

"Oleg, give it," growls Rasia, and with much moaning and groaning, he reaches under his butt and into his pocket and retrieves a warm quarter, then hands it to his son.

"Thank you, kind sir. Much appreciate." Vaclav holds the coin pinched between his forefinger and his thumb, and holds it forward for the audience to inspect.

"As my lovely assistant is showing this is a normal piece of paper - no holes or rips or no tears. This is just a normal paper. Thank you Lena." Lena nods.

"Please watch carefully. I am now folding the paper around the coin." Vaclav folds the paper several times, so that the coin is contained within it, as in an envelope. Rasia scoots a bit forward on the couch, following her son's direction to watch carefully. Oleg crosses his arms. Oleg has sleeping marks like deep scars on his face and neck, and hairs bursting out of the top of his shirt.

"You can see that the coin is completely sealed within the paper." Lena steps next to Vaclav, and extends her hands sideways to draw the audiences attention here, to the mysterious coin-wrapped-in-paper.

Focusing carefully, Vaclav passes the paper-wrapped coin from his left to his right hand. He doesn't explain this movement. Lena puts her arms stiffly up in the air and twirls around and around, coming dangerously close to the edge of the coffee table. Rasia gasps, afraid for Lena to fall.

"Using my magic wand, I will now make the coin disappear from thin air," Vaclav says, holding the coin-packet stiffly in his right hand, and nervously slipping his left hand into his back pocket. Lena attempts to shimmy, twitching her bony shoulders back and forth.

Vaclav keeps his hand in his pocket for a moment of Lena's shimmying, and then removes it, smiling, and shows the audience his magic wand.

Vaclav's magic wand is one of his most special things. It is a real magic wand, from the magician's supply shop in Manhattan. His mother took him, and they had to ride on the subway for more than an hour to get there, and they had to transfer twice. At the store, they asked the shop owner for help picking out the best wand, and afterward, they had lunch at a restaurant, and Vaclav held it in his lap the entire time.

"Abracadabra!" he says, with the final tap, "The coin has disappeared!"

"Lena," he says, "my lovely assistant, if you would be kind, please take this paper envelope and tear it into two complete pieces." Lena takes the paper packet from him, and effortlessly tears the paper in two. She then shows the paper pieces to the audience, and once the audience has seen sufficient evidence of the disappearance of the quarter, she throws the pieces of paper up into the air, for dramatic effect.

Vaclav and Lena bow, so that the audience knows to begin clapping.

"Bravo!" says Rasia. Vaclav and Lena step down from the coffee table.

"Where is my quarter," says Oleg.

"Oleg," says Rasia to his father, meaning, do not ask about the quarter again.

"Thank you," says Vaclav, "I am glad you like. Lena and I will perform this on Saturday for fans at the boardwalk of Coney Island." Vaclav is beaming.

"Vaclav," Rasia takes a deep breath. She's been trying to ignore this idea of a performance at Coney Island, but Vaclav won't forget. He's too persistant. He doesn't know that this is a very bad idea.

"This is not such a good idea," she says.

"It is not safe." This is maybe close to being honest, she thinks. It is not safe, for Vaclav, out in the world, with his eyes open to everything and his heart beating right on his sleeve, with his dreams in his hands, ready to show and tell.

"That's not fair! We must practice to do the show for a REAL audience!" he yells. This is fine, she tells herself, to let him think she is being the meanest person in the world. Let him think that she does not want him to perform his magic.

"That is the final word. I will not discuss," she says.

"Go wash your hands and get ready for dinner," she says. "Lena, you too."

Rasia stands at the door as Vaclav and Lena march toward a dinner which is not the thing they are hungry for.

Excerpted from Vaclav & Lena by Haley Tanner. Copyright 2011 by Haley Tanner. Excerpted by permission of The Dial Press, a division of Random House Inc. All rights reserved. No part of this excerpt may be reproduced or reprinted without permission in writing from the publisher. 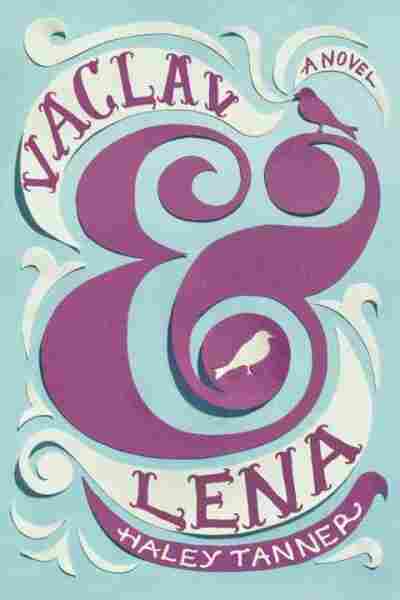