Accessibility links
The Political Zombies Who Walk The Halls Of Congress Political scandals don't always kill the participants. Some survive. Some give up the ghost. Some whose careers have died keep on going. 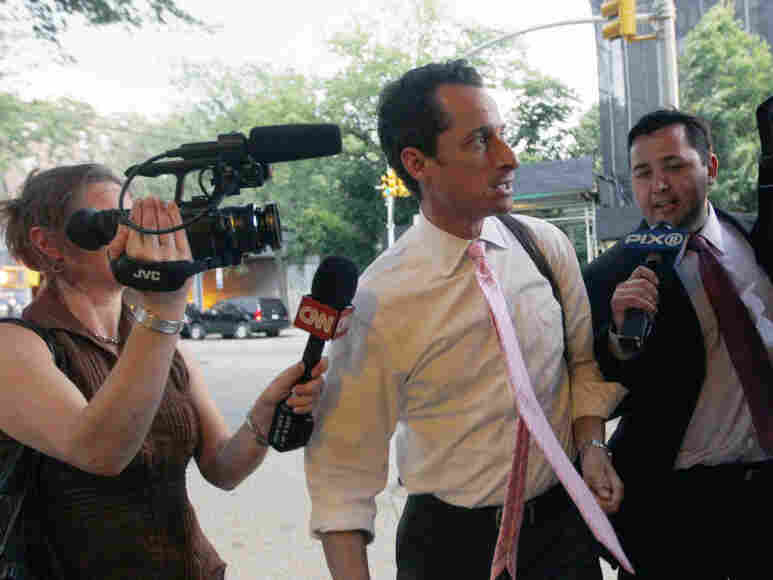 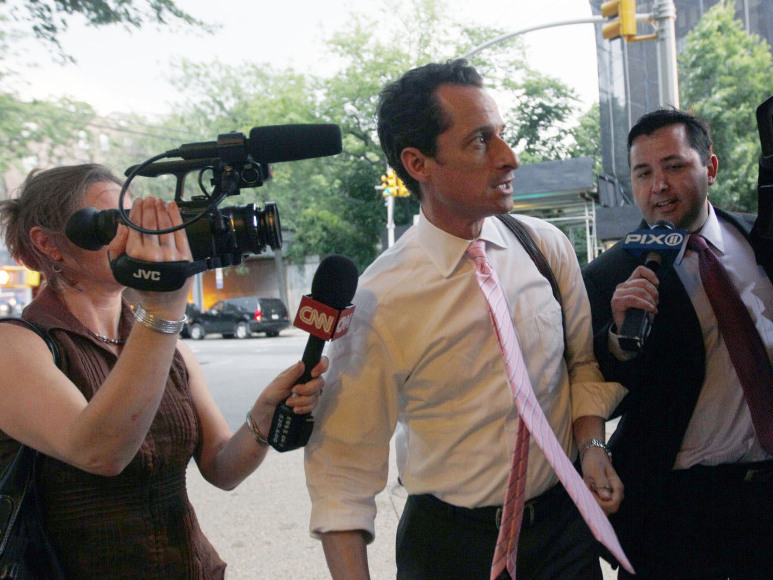 Rep. Anthony Weiner (D-NY) says he won't resign despite the sex scandal he's caught up in. Survivor or zombie? Too soon to tell.

NPR can now confirm that there are zombies in the U.S. Capitol.

OK, not the kind that pop out of graves and eat brains, but a different kind of undead — the undead political career. This week New York Rep. Anthony Weiner said he is staying put, even though some top Democrats have publicly called for him to resign.

He's not the first one to stay in politics after serious ethics violations, trying to revive a seemingly lifeless career.

In this contrived scenario, there are three categories of Congressional Zombies:

-- those who survived a scandal to live again,

-- those who are wounded by scandal but stay in Congress (the real zombies),

-- and those who hung on for a while but eventually got buried.

"Never has the willingness of the minority to abuse the process for purely political ends been clearer than today," said Rep. Barney Frank (D-MA) on the House floor more than 20 years ago. To the ensuing chorus of complaint from other representatives, he responded, "Parliamentary inquiry, Mr. Speaker, does whining come out of my time?"

Match the voice with the embattled politician. 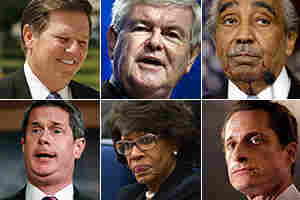 These days, Frank is more often thought of as the Democrats' quick-witted bulldog and Congress's first openly gay lawmaker. That's a testament to his ability to revive his career.

In July 1990, Frank was censured on the floor of the House for fixing 33 parking tickets for a gay male prostitute who lived with Frank in the middle 1980s. The prostitute continued to "see clients" in Frank's apartment, though Frank says he had no knowledge of that.

Other survivors? There's Rep. Maxine Waters (D-CA). During the fiscal meltdown, she arranged a meeting with the Treasury Department for a bank her husband owned stock in.

And the classic example? Sen. Ted Kennedy (D-MA). He survived scandal to become the Lion of the Senate.

Now let's turn to the real zombies — the ones who are so wounded by scandal that, even though they stay in the Capitol, they walk the halls like the living dead, always under an ethical cloud.

Charlie Rangel (D-NY) says, "You're not gonna tell me to resign to make you feel comfortable." He explains, "I love my country; I love my Congress. I love the debates! I love the arguments!"

Rangel got a pretty hard slap on the wrist from the House Ethics Committee, after he was found to have income and investments that he had not disclosed, as well as other violations.

Another zombie? Sen. David Vitter (R-LA), who was a client of a Washington prostitution ring. He was never charged because the news came out after the statute of limitations had expired. Two of Vitter's calls to the madam were made during votes on the floor.

He apologized in 2007 — "I want to again offer my deep sincere apologies to all those who I've let down and disappointed with these actions from my past" — and neatly won a second term in the Senate.

The Line Between Life And Living Death

Now, you could argue that Rangel and Vitter aren't zombies — after all, they survived!

"Survival is a low bar," says Charlie Cook, who has covered Washington for 39 years and runs the Cook Political Report. He says of Vitter, "Will he ever move up into the Republican leadership? No. Would Charlie Rangel, if Democrats took control of the House, would he become chairman of the Ways and Means Committee? No."

Now, lastly, let's consider the many lawmakers who tried hard to stay, but watched their careers flat-line.

There's former Idaho Republican Sen. Larry Craig ("I'm not gay; I never have been gay"), the one with the "wide stance" in the Minneapolis airport bathroom.

And former Ohio Republican Rep. Bob Ney, the guy who changed french fries to freedom fries. Ney spent a year and a half in prison, after which he told a movie producer, "Probably oughta be mandatory that federal judges, and members of Congress, people who want to be members of Congress serve in the prison first, then go do your job. Things might change."