Accessibility links
Killing One Owl Species To Save Another In the 1990s, the government set aside millions of acres of forest to protect spotted owls, but their numbers continue to decline. Biologists believe that's due to an invasion of barred owls. Now, officials plan to eliminate barred owls from a few study areas to see if the spotted owls return. 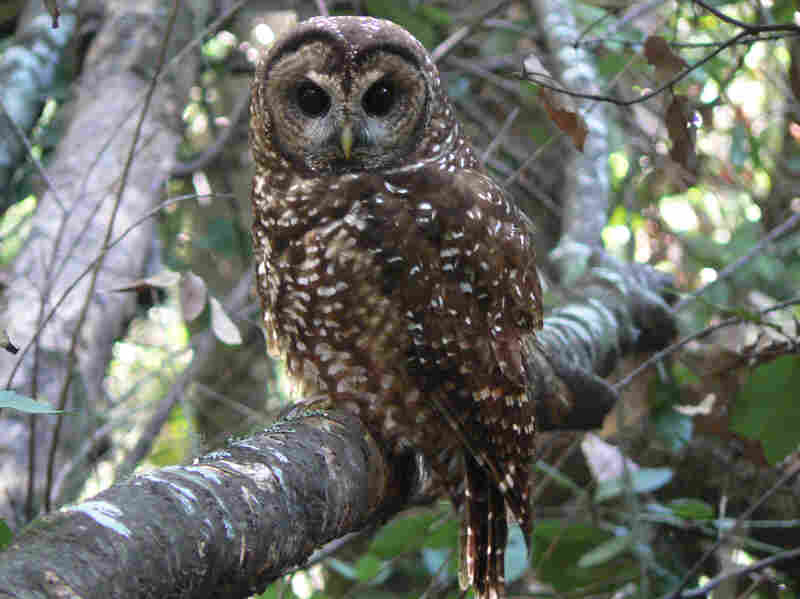 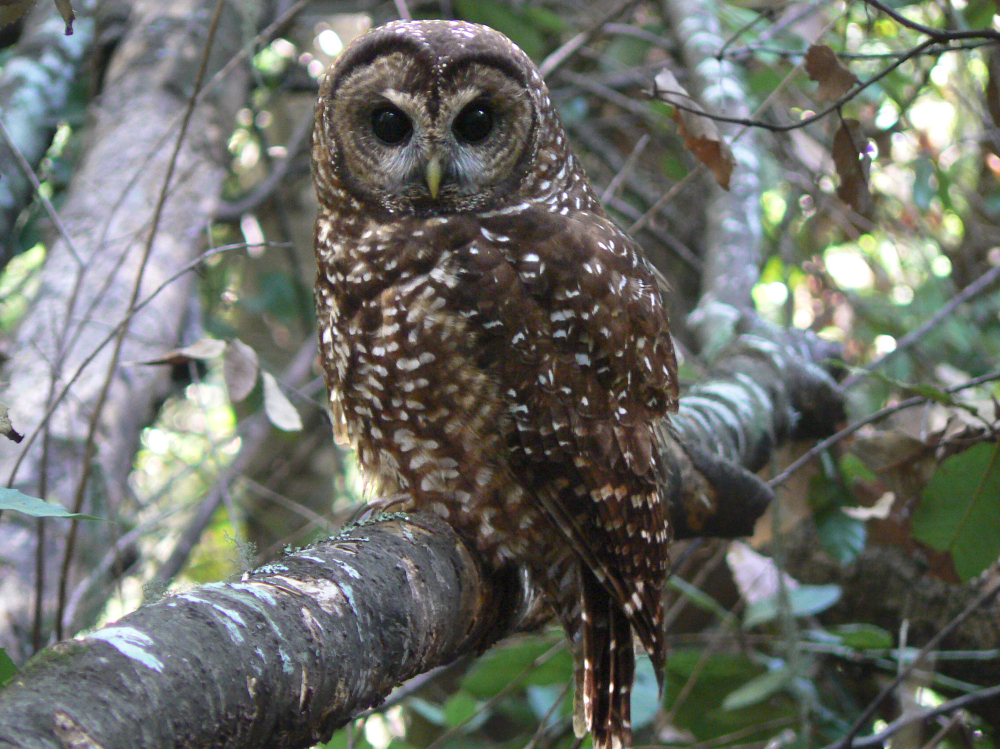 A female northern spotted owl in California. Spotted owls are losing habitat to invasive barred owls, a species originally from the eastern U.S.

Spotted owls are on the decline despite two decades of work to bring them back. So, later this month, wildlife officials are releasing a new plan to protect the owls, and it includes a controversial new approach: eliminating their cousins.

In a dense forest near Muir Woods, just north of San Francisco, National Park Service ecologist Bill Merkle plays a recording of a spotted owl in hopes of hearing from a real one.

Northern spotted owls became famous in the 1990s, when the federal government set aside millions of acres of forest to protect them. That stoked an epic battle between loggers and wildlife groups over their habitat. Since then, spotted owls haven't come back. Biologists believe that's due to an invasion of barred owls.

Barred owls take over spotted owl territory and in some cases even attack them. They have an advantage because they eat a wider variety of prey. In places like western Washington, the spotted owl population has been cut in half since the barred owl showed up.

"It's a troubling picture for the spotted owls," Merkle says.

Originally from the eastern U.S., barred owls invaded spotted owl territory in Washington state decades ago and, Merkle says, they've moved down the coast ever since.

"The barred owl is a little larger," he says. "It's a little more aggressive."

The Fish and Wildlife Service hopes to deal with this by "permanent removal," says Robin Bown, a biologist with the agency. "We're going to look at all potential opportunities, but the most humane way to do it is to shoot them."

Bown says the agency plans to eliminate barred owls from a few study areas to see if the spotted owls there do better. And yes, she says, shooting the barred owls will raise a few eyebrows.

"It's a difficult concept, to say I'm going to kill one species to try to save another species," she says. "But it's also something that, in some cases, we need to do."

"To try to control barred owls across a large region would be incredibly expensive, and you'd have to keep doing it forever because if you ever stopped, they would begin to come back into those areas," he says.

That's why, Forsman says, it's looking pretty dismal for the spotted owl.

"I think all we can really do is try our best to provide [a] habitat for spotted owls and in the long run, we're just going to have to let the two species work it out," he says.