Accessibility links
Move Over, Microwave: A Pressure Cooker Comeback? Pressure cookers were once a common household appliance, but they fell out of favor in the U.S. as people turned to frozen dinners and microwaves. Now, at a time when Americans are spending less time in the kitchen than ever before, the humble appliance may be poised for a comeback. 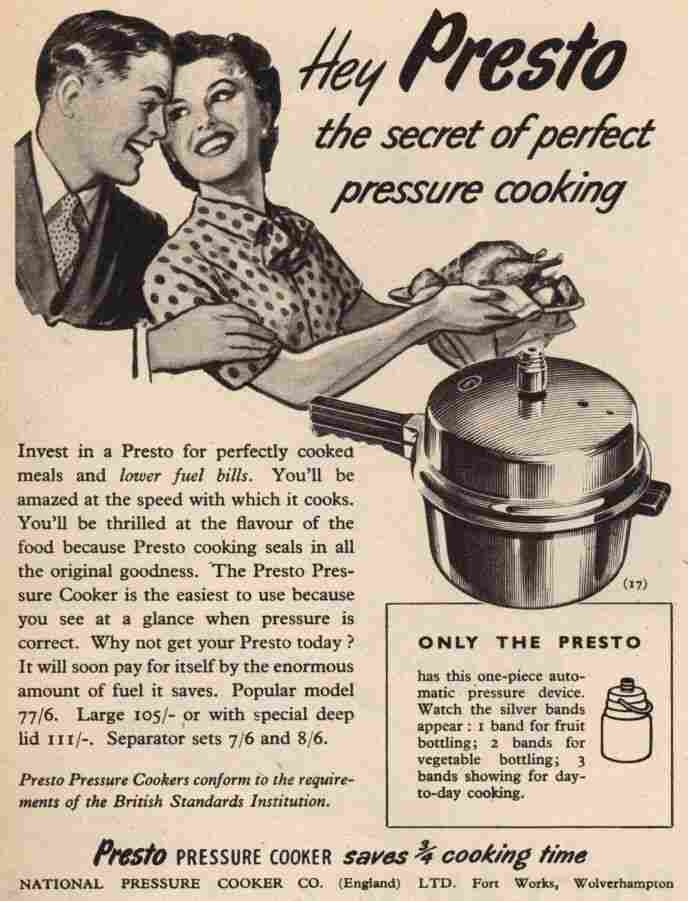 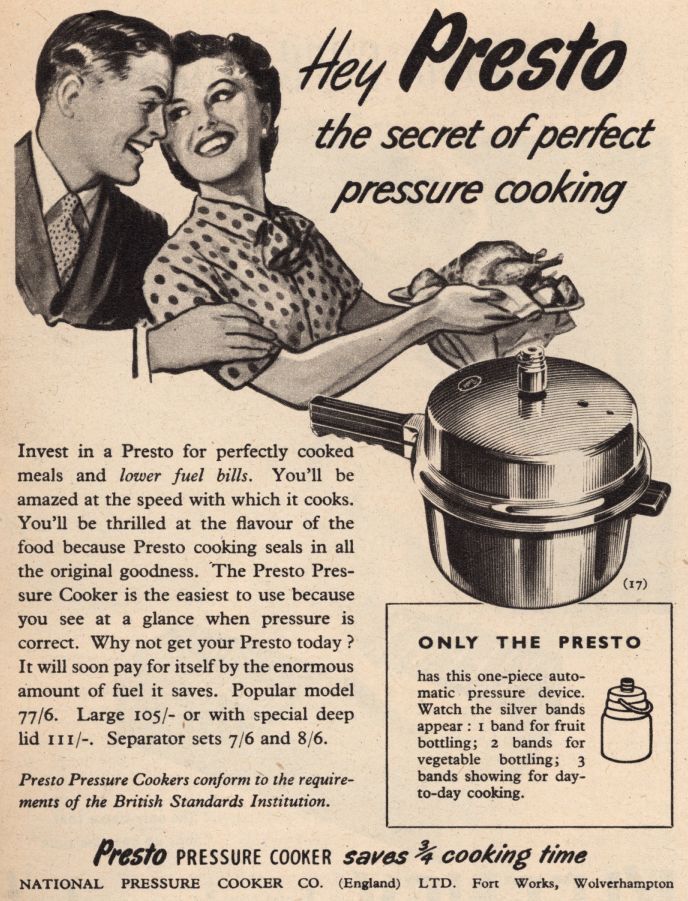 A happy young couple makes good use of their Presto Pressure Cooker in this 1952 ad.

Is your job a pressure cooker? Most people are familiar with the metaphor, but not the actual device — once a common household item.

"It was the wedding gift that you gave. People got a pressure cooker," says Lorna Sass, author of The Pressured Cook. She says when Presto introduced its version of the gadget at the 1939 World's Fair, it didn't take long for it to catch on.

"When the men went off to the second World War, and Rosie the Riveter was working, she used a pressure cooker because she had to make dinner fast when she came home from the job," Sass explains.

It works using basic principles of science: Water normally boils at 212 degrees Fahrenheit — and doesn't get hotter. But under pressure, it boils at about 242 F and stays there. Raising the boiling point lets the food cook at the higher temperature, which cuts cooking time by two-thirds or more.

Fabulous, right? But like your pressured co-worker who deploys the chute or goes postal, there could be unintended outcomes: namely the infamous exploding meals. "I think I've heard every version [of exploding meal stories]," Sass says. "I've heard split pea soup. I've heard tomato sauce. You name it. I've heard it. I roll my eyes at this point." 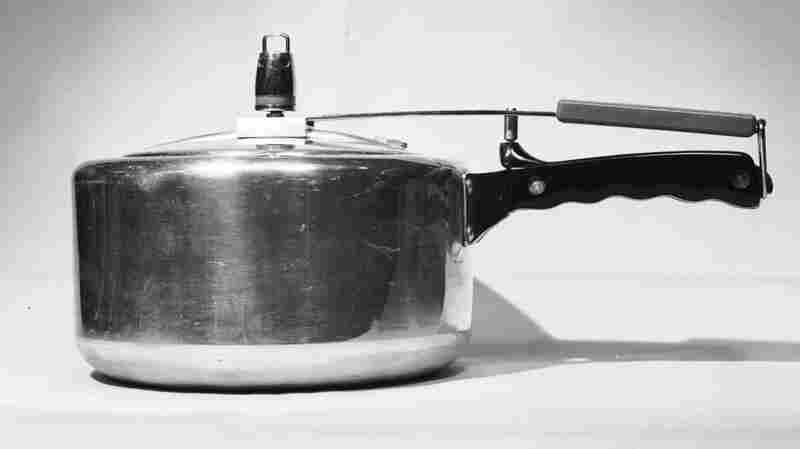 Water normally boils at 212 degrees Fahrenheit — and doesn't get hotter. But under pressure, it boils at 242 F. In a pressure cooker, food cooks at a higher temperature, which speeds up the cooking process. Above, a 1948 pressure cooker. Chaloner Woods/Getty Images hide caption 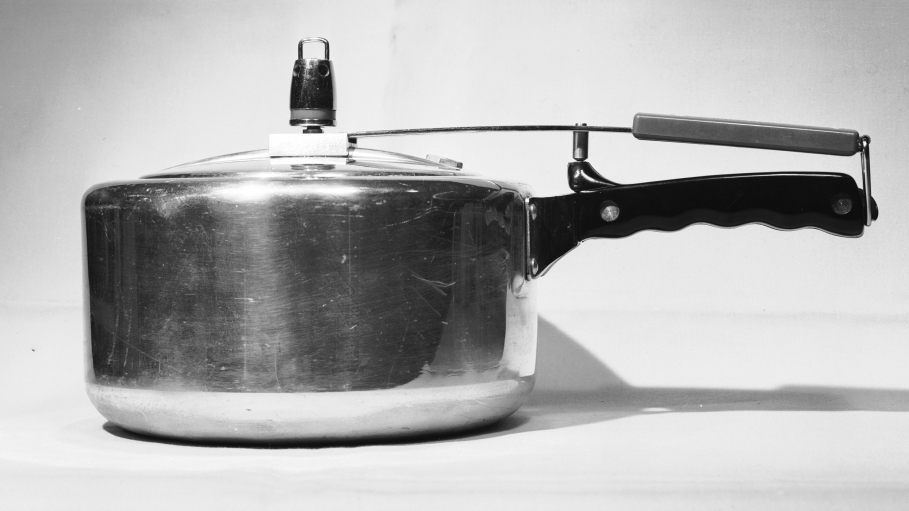 Water normally boils at 212 degrees Fahrenheit — and doesn't get hotter. But under pressure, it boils at 242 F. In a pressure cooker, food cooks at a higher temperature, which speeds up the cooking process. Above, a 1948 pressure cooker.

The cooker's reputation was tarnished for generations to come. People have the mistaken impression that cooking with the pressure cooker is dangerous, says Chef Jacques Pepin, who uses a modern foolproof version on his show Fast Food My Way. It doesn't chug like an engine anymore. It gurgles like a baby.

Although Americans moved on to frozen dinners and the microwave, pressure cookers stayed popular in Pepin's native France, where more women remained in the workforce after the war. The cookers are a staple across Europe, North Africa, South Asia and South America because they're economical: They tenderize cheaper, tougher cuts of meat. With the growing American interest in sustainability and slow foods, the cooker could be poised for a comeback.

Lately, it's even been enjoying some time in the spotlight on TV shows like Iron Chef. Aside from those formerly slow braises, Sass says pressure cooking is great for cheesecakes, risotto, vegetables and beans. It won't overheat your kitchen in the summer, and you can enjoy the thrill of speed without any rush. As for the pressure? You can leave that at the office. 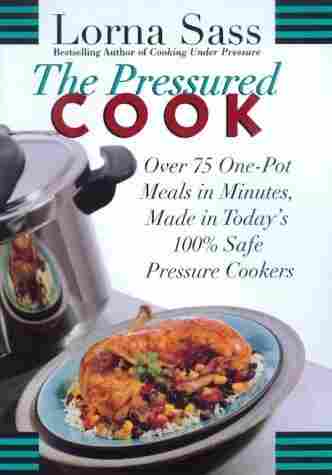 What To Make In Your Pressure Cooker?

Here are two recommended recipes from Lorna Sass' The Pressured Cook: Over 75 One-Pot Meals in Minutes, Made in Today's 100 Percent Safe Pressure Cookers.

This dish was inspired by the evocative tastes and aromas in Paula Wolfert's classic Couscous and Other Good Food from Morocco (Harper & Row, 1973). "Nowadays, everyone in Morocco is cooking their tagines in pressure cookers," Paula said when she heard I was writing this book. Serve it with couscous or Fragrant Coconut Rice.

Heat the oil in the cooker, and saute the onion until lightly browned, 4 to 5 minutes. Stir in the remaining ingredients except for the cilantro and almonds.

Lock the lid in place and over high heat bring to high pressure. Adjust heat to maintain high pressure and cook for 14 minutes. Quick-release the pressure according to manufacturer's directions. Remove the lid, tilting it away from you to allow any excess steam to escape.

Slash the carrots with a knife. Stir in the cilantro. Adjust the seasonings and transfer to a serving platter. Garnish with toasted almonds, if desired.

A must for chocolate lovers. This is a real winner.

2 to 3 tablespoons sweet butter, plus butter for greasing the souffle dish

12 to 14 one-inch-thick slices whole-wheat or white Italian or French bread, left out 12 to 24 hours to dry

Generously butter a 5-cup souffle dish or suitable alternative. Set aside. Cut a piece of aluminum foil 2 feet long by 1 foot wide and double it twice lengthwise to create a strip for moving the pudding dish to and from the cooker. Set aside.

Butter the bread and cut each slice into 2 to 3 pieces. Arrange one third of the bread on the bottom of the souffle dish.

In a food processor or with a whisk, combine the milk, Kahlua and eggs, and pour one third of this mixture over the bread, turning the bread pieces over so that they thoroughly absorb the liquid. Distribute one third of the chocolate on top of the bread-milk mixture. Repeat layering the bread, liquid and chocolate in this manner two more times, or until the dish is seven-eighths full. (Be sure to finish with a chocolate layer.) Cover with aluminum foil so that the foil fits tightly around the sides and tucks under the bottom but allows some room on top for the pudding to expand.

Set a trivet or steaming rack on the bottom of the cooker. Center the souffle dish on the aluminum foil strip and carefully lower it into the cooker. Fold the ends of the strip over the top of the pudding. Pour in enough water to reach one third up the sides of the pudding dish.

Lock the lid in place and over high heat bring to high pressure. Adjust heat to maintain high pressure, and cook for 15 minutes. Turn off the heat. Transfer the cooker to a cool burner and let the pressure drop naturally. Remove the lid, tilting it away from you to allow any excess steam to escape.

Let the pudding cool slightly before lifting it from the cooker with the aid of the foil strip. If you are not serving the pudding immediately, cut open the foil top and let the pudding remain warm in the cooker, placing the lid ajar, for up to an hour. While the pudding is still warm, gently spread the top layer of chocolate with a knife to create a frosting. To serve, scoop out the pudding with a large spoon. 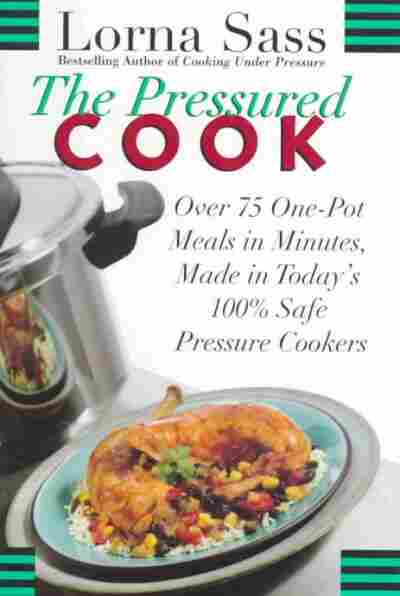