Accessibility links
Arab Spring Leaves Egypt In An Economic Slump Following the revolution that ousted Egyptian President Hosni Mubarak earlier this year, the country's economy is sagging — tourism has plummeted, unemployment is soaring and poverty is spreading. "I have three kids, and I can't even provide enough food for them," one street vendor says. 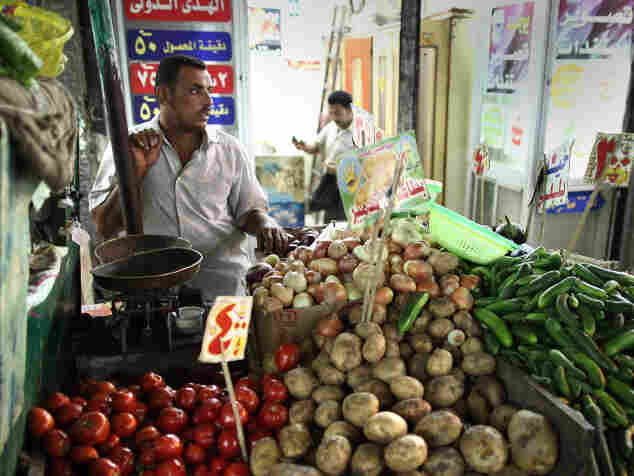 A vegetable seller waits for customers at Ataba market in Cairo. Tourism has dropped since the revolution that removed President Hosni Mubarak from office, and Egypt's economy is sagging. Peter Macdiarmid/Getty Images hide caption 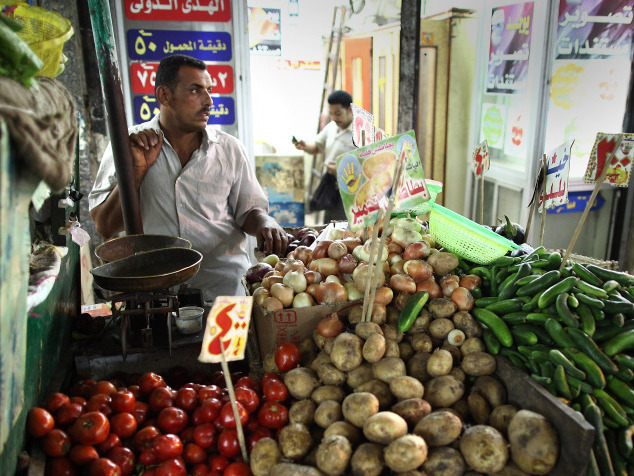 A vegetable seller waits for customers at Ataba market in Cairo. Tourism has dropped since the revolution that removed President Hosni Mubarak from office, and Egypt's economy is sagging.

Following the revolution that ousted Egyptian President Hosni Mubarak earlier this year, the country's economy is sagging — tourism has plummeted, unemployment is soaring and poverty is spreading.

In Cairo, it's easy to see how devastating the Arab Spring has been to economies in the Mideast and North Africa. Nowhere has the damage been greater than in Egypt.

Abu Saud Mustafa, 50, sells papyrus sheets with drawings of Egypt's ancient pharaohs. He says they used to sell for the equivalent of $10 to $15 apiece. But these days, if Mustafa can find a tourist to buy one, the best he can get is $2 or $3.

"Ever since the revolution, there's been no work," Mustafa says. "I have three kids, and I can't even provide enough food for them."

Mustafa says the government "has to do something."

"We need stability and safety, so the tourists will come back," he says. "This is vital to us, the poor people who depend on a day's work so we can eat."

The forecast does not look promising: Predictions of 7 percent growth have been slashed. Tourists who fled in droves at the peak of the season have been slow to return. Inflation jumped to more than 11 percent in March. In the first quarter, Egypt's stock market lost nearly a quarter of its value.

Egypt's military rulers have not been shy about broadcasting the bad news. One said foreign investment in Egypt was "near zero." Another said if things don't change, more than two-thirds of the population could wind up in poverty in the short term.

Ahmed El-Naggar, an economist at the Al-Ahram Center for Political and Strategic Studies, says the Mubarak regime, in its desperate efforts to crush the rebellion, further poisoned the economic atmosphere — by blaming foreigners for the unrest and releasing prisoners onto the streets.

The interim government is taking a few steps, boosting the minimum wage and imposing a 10 percent capital gains tax. But the private sector's near-term outlook is gloomy, with hundreds of top businessmen reportedly hiding in Europe, afraid of being caught in the anti-corruption backlash under way.

John Sfakianakis, an economist with the Saudi Fransi Bank in Riyadh, Saudi Arabia, told Al Jazeera English as Egypt's revolution unfolded that the country's economic problems go back to well before Mubarak's government.

"In many ways, they go back to the 1950s, when the industry was nationalized," he says. "In many ways, the entrepreneurial class of Egypt was destroyed since the '50s. The middle class in Egypt shrunk over the last 10 years exponentially. So, as a result, today you have a system where it is semicapitalist and semisocialist."

There are other tensions to worry about as well.

In downtown Cairo, Fathi Said, a Coptic Christian sitting in the souvenir shop opened by his grandfather in 1928, says he's naturally optimistic — he thinks Egypt has weathered worse economic troubles than what it faces today. But he fears a resurgence of the kind of Muslim-Christian violence that led to torched churches in the Imbaba neighborhood earlier this year.

"After what happened in Imbaba, the curve is going down and out," Said says. "If nothing happens like that, I think it will be good. If the security is OK, everything will be very, very good."

Economist El-Naggar also has a positive outlook in the longer term. He points out that Egypt probably won't fare as badly as other countries that have undergone similar upheavals.

"Because in transition period in Russia, there was minus 10 percent for GDP annually for six years," he says.

Such thoughts may not reassure Egyptians struggling to make ends meet each day. But their calls for greater security, while getting a sympathetic ear among Egypt's ruling military council, are raising alarm bells among the young Egyptians who sparked this revolution.

They worry that the military will use the calls for stability to postpone real reforms — perhaps indefinitely.