Accessibility links
'Book of Mormon' Draws Hopefuls Into Ticket Lottery The Book of Mormon has been a popular Broadway musical since it was in previews — So popular, in fact, that hundreds gather in the heat, day after day, just to enter a lottery for a ticket. 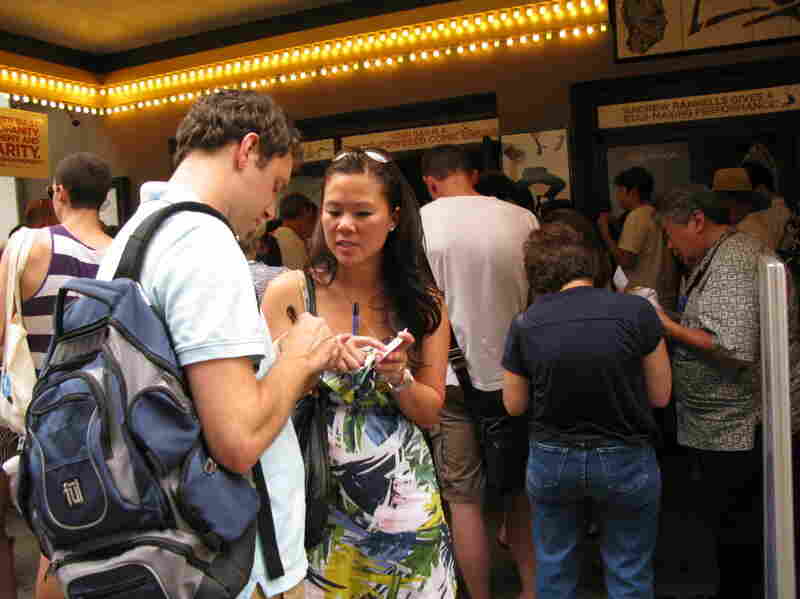 Trent Fucci and Nancy King fill out lottery tickets for The Book of Mormon in front of a Broadway theater. The play has been sold out since previews. Margot Adler/NPR hide caption 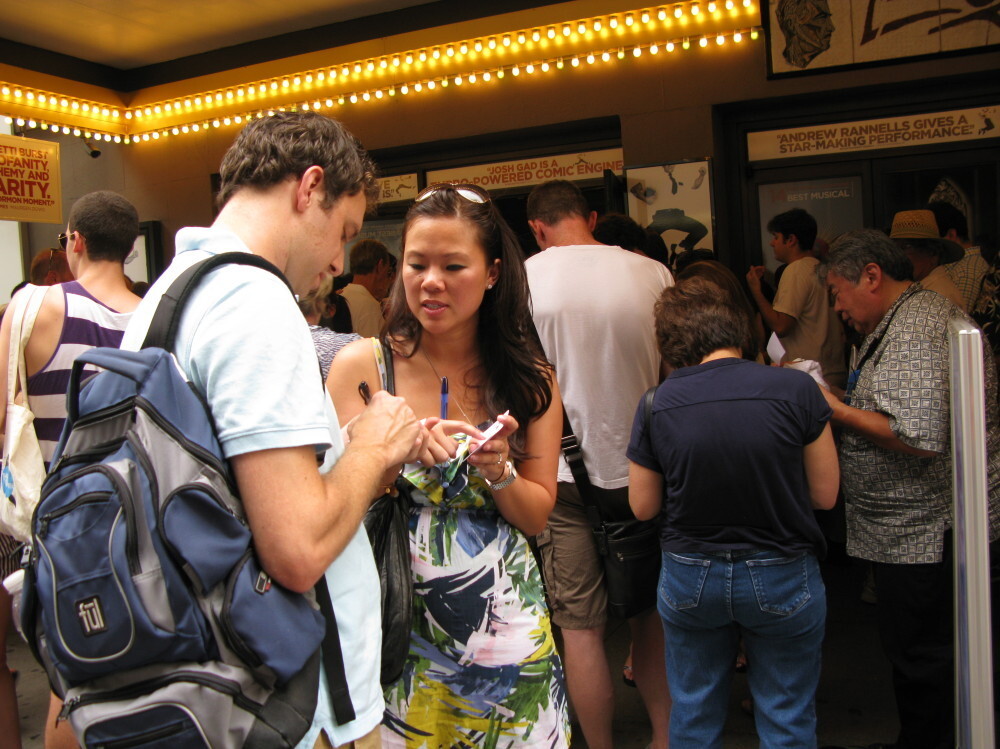 Trent Fucci and Nancy King fill out lottery tickets for The Book of Mormon in front of a Broadway theater. The play has been sold out since previews.

The Book of Mormon danced off with nine Tony awards Sunday night, including Best Musical.

But tickets to the show by the creators of the animated TV show South Park have been almost impossible to get since the show was in previews. Every afternoon, hundreds of people stand outside the theater to participate in the lottery. The prize: tickets — some in the first row — for $32 each.

One a recent afternoon, more than 350 people are standing in the heat outside the Eugene O'Neill Theatre to enter the Book of Mormon lottery. Ross Jackson and Frank Bobick are among them.

"This is only my third day in New York," Jackson says. "I came here from Arkansas, so the closest thing I have ever done to this was like general rush in Little Rock at the Robinson Center Music Hall."

Bobick, who is from Minneapolis, says knowing that the creators of South Park wrote the play makes it worth the wait for him.

Scott Rudin On 'Book Of Mormon' And Edgy Humor

Christopher Catalano is an aspiring actor who works for the theater. Every 10 minutes or so, he takes out a bull horn and tells the growing crowd that the drawing will be at 5 p.m., and that 22 tickets will be available. He makes it as fun as possible.

"You also must have a photo ID; does everyone know what a photo ID is? It's an ID with a photo on it," he quips.

A few come often. Mark Etheridge works nearby. It's his 29th attempt to get tickets, but he says he hasn't had any luck.

Jeff LaDuke, a fan of South Park, travels in from Queens after work.

Finally, Catalano picks up the bullhorn.

"Hasa diga, everyone. How you doing?" he says, borrowing a term from a key song in the show.

Then, the names are picked. Several names down the list, Catalano calls out "Jeff LaDuke."

"I thought it was a trick at first," LaDuke says. "It worked, finally!"

As for Mark Etheridge, he plans to return the next day for attempt No. 30.