Accessibility links
The Nation: Zero Percent Unemployment Possible? The notion that all Americans could be put to work sounds radical, but L. Randall Wray of The Nation says that it's not only a possibility but the only way to save the economy. 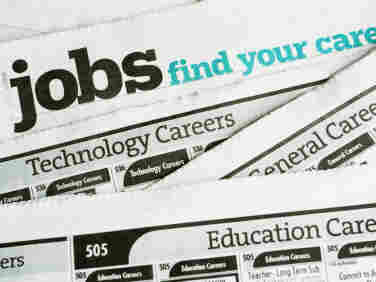 The Employment Act of 1946 committed the government to getting unemployed Americans back to work. It was amended in 1978 by the Humphrey-Hawkins Act which set a goal of 3 percent unemployment. Some believe this promise has yet to be fulfilled but isn't unattainable. iStockphoto.com hide caption

L. Randall Wray is an economics professor at the University of Missouri, Kansas City.

There is no economic policy more important than job creation. The private sector plays an invaluable and dynamic role in providing employment, but it cannot ensure enough jobs to keep up with population growth or speed economic recovery — much less achieve the social goal of full employment for all Americans. Thankfully, there is an alternative: a job guarantee through a government-provided "employer of last resort" program offering a job to anyone who is ready and willing to work at the federal minimum wage plus legislated benefits.

In recent decades full employment has been wrongly dismissed as not only impossible but economically counterproductive. Though the Employment Act of 1946 committed the government to the goal of high employment (it was amended by the 1978 Humphrey-Hawkins Act, which targeted a measured unemployment rate of 3 percent), we act as if full employment would ruin us, destroying the value of our currency through inflation and depreciation, and weakening the labor discipline that high unemployment maintains through enforced destitution. Through the thick and thin of the business cycle, we leave tens of millions of Americans idle in the belief that this makes political, economic and social sense.

It doesn't. The benefits of full employment include production of goods, services and income; on-the-job training and skill development; poverty alleviation; community building and social networking; social, political and economic stability; and social multipliers (positive feedbacks and reinforcing dynamics that create a virtuous cycle of socioeconomic benefits). An "employer of last resort" program would restore the government's lost commitment to full employment in recognition of the fact that the total impact would exceed the sum of the benefits.

The program has no time limits or restrictions based on income, gender, education or experience. It operates like a buffer stock: in a boom, employers will recruit workers out of the program; in a slump the safety net will allow those who lost their jobs to preserve good habits, keeping them work-ready. It will also help those unable to obtain work outside the program enhance their employability through training. Work records will be kept for all participants and made available to potential employers. Unemployment offices will be converted to employment offices, to match workers with jobs that suit them and to help employers recruit staff.

All state and local governments and registered nonprofit organizations can propose projects; proposals will be submitted to a newly created office within the Labor Department for final approval and funding. The office will maintain a website providing details on all pending, approved and ongoing projects, and final reports will be published after projects are complete.

Participants will be subject to all federal work rules, and violations will lead to dismissal. Anyone who is dismissed three times in a twelve-month period will be ineligible to participate in the program for a year. Workers will be allowed to organize through labor unions.

The program will meet workers where they are and take them as they are: jobs will be available in local communities and will be tailored to suit employees' level of education and experience (though with the goal of improving skills). Proposals should include provisions for part-time work and other flexible arrangements for workers who need them, including but not restricted to flexible arrangements for parents of young children.

All participants will obtain a Social Security number and maintain a bank account in an FDIC-insured bank. Weekly wages will be paid by the federal government directly to participants' accounts. The government will also provide funding for benefits as well as approved expenses up to a maximum of 10 percent of wages paid for a project (to cover the cost of administrative materials and equipment).

Estimated spending will be 1–2 percent of GDP, with economic, social and political benefits several times larger. Net program costs will be much lower, since spending on unemployment compensation and other relief will be reduced — this program will pay people for working, rather than paying them not to work. The promise of increased national productivity and shared prosperity should far outweigh any fears about rising deficits. To fulfill this promise, we need to put Americans back to work.