Accessibility links
After 40 Years, Pentagon Papers Declassified In Full A top-secret Defense Department report on the Vietnam War that became known as the Pentagon Papers was leaked and partially published by The New York Times 40 years ago. Now all 7,000 pages are available in their entirety. "It's the real deal," says the man who organized their release. 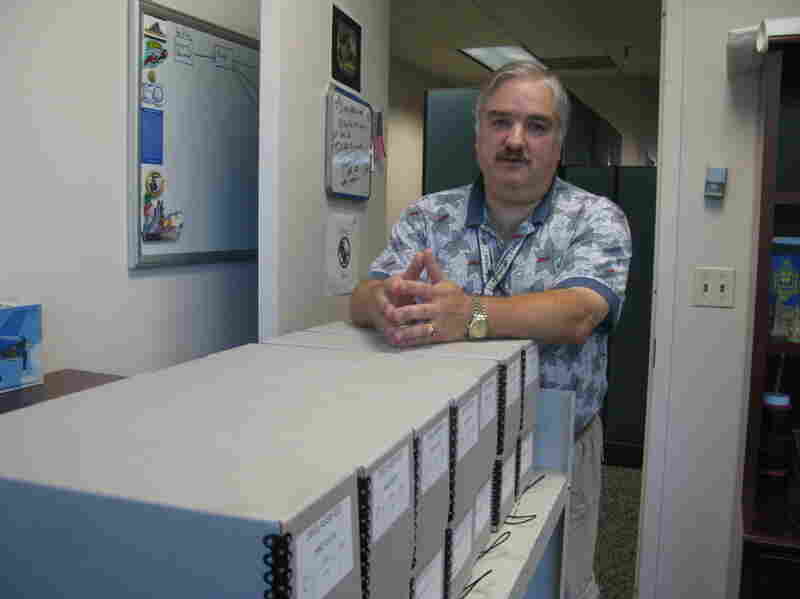 A.J. Daverede, of the National Declassification Center, led the effort to get the Pentagon Papers released. Although incomplete versions of the papers have been released before, Daverede describes the papers made available today as "the real deal." Tamara Keith/NPR hide caption 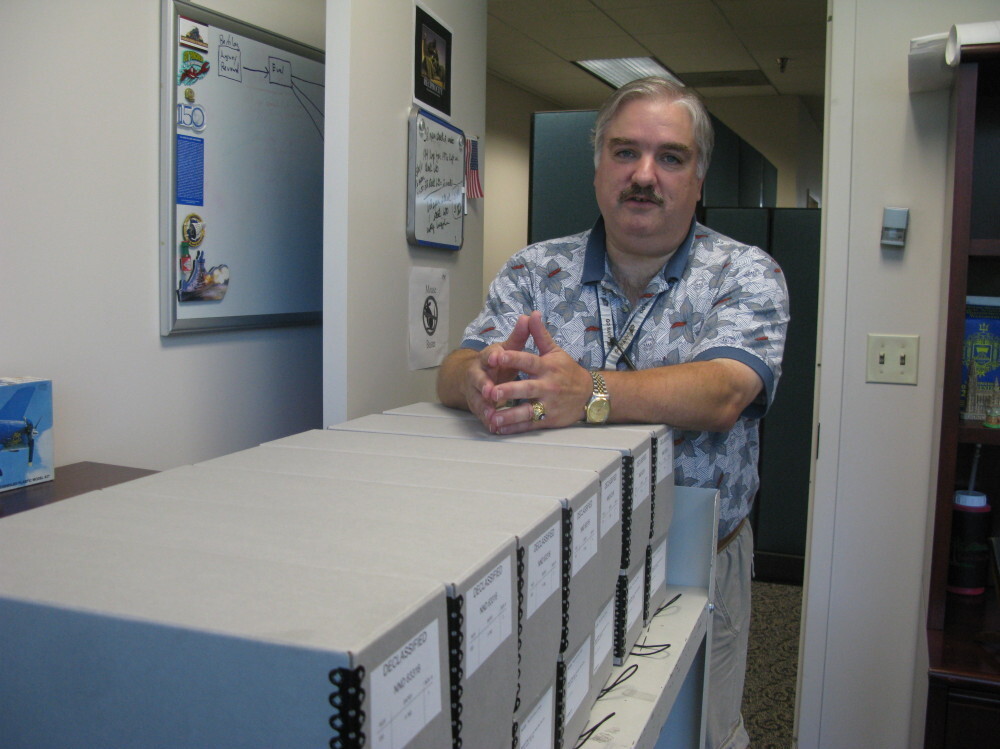 A.J. Daverede, of the National Declassification Center, led the effort to get the Pentagon Papers released. Although incomplete versions of the papers have been released before, Daverede describes the papers made available today as "the real deal."

A.J. Daverede wheels a cart loaded with document boxes into his office at the National Archives.

"This is them," he says. "Eleven boxes constitute the entirety of the report of the Vietnam Task Force. You just start here: box one."

Forty years ago, on June 13, 1971, The New York Times published portions of these documents, better known as the Pentagon Papers. On Monday, for the first time, the government released all 7,000 pages of the report with no redactions.

The fact that Daverede, who works in the National Declassification Center, is able to open the boxes in the presence of someone without top-level security clearance is an accomplishment. On the blue paper cover of the report, it says "Top Secret — Sensitive," and until Monday, it was.

Daverede, who grew up during the Vietnam War, was instrumental in making every word of the papers finally available to the public. 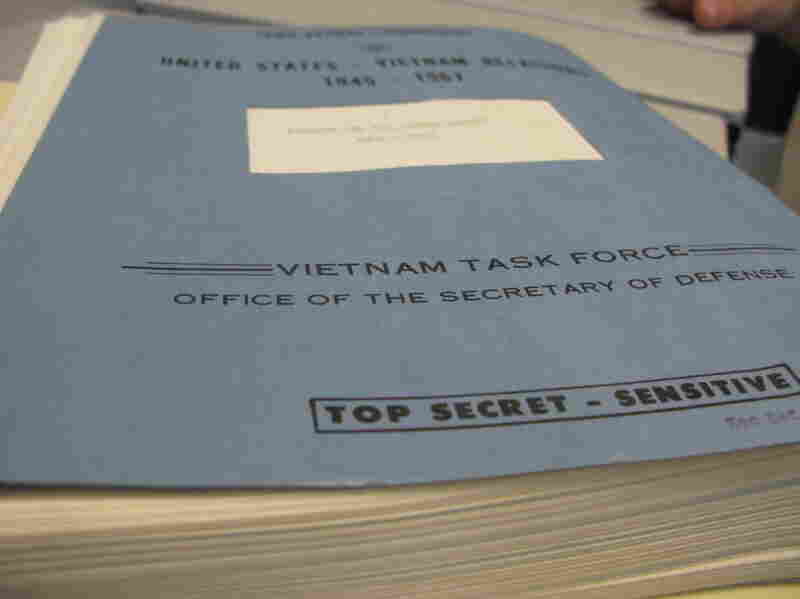 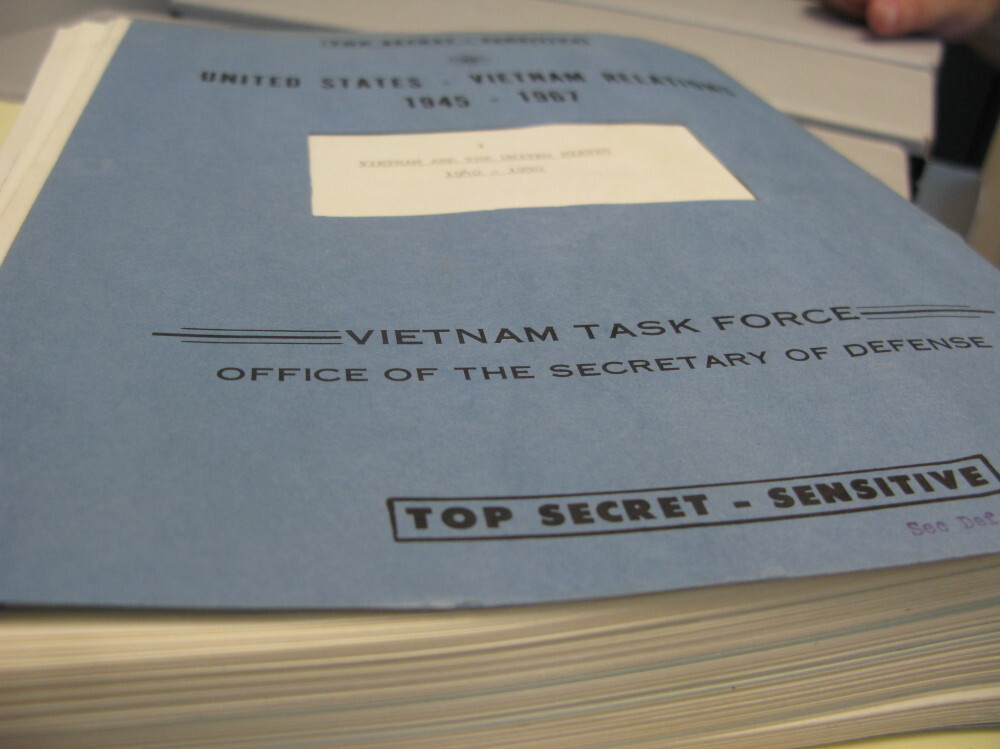 On Monday, the National Archives released in its entirety the "Report of the Office of the Secretary of Defense Vietnam Task Force," better known as the Pentagon Papers.

-Explore the report at the National Archives

-Watch The Most Dangerous Man In America, the Academy Award-nominated film about Daniel Ellsberg and the release of the Pentagon Papers, streaming free June 13-14 in honor of the 40th anniversary of their release.

"I saw it in the stacks; the box labels were pretty clear of what it was," he says. "And I started cracking boxes, started looking through at what agencies were concerned about and [said], nah, that really doesn't need to be protected anymore. We should ask about these things."

It took months of negotiations with about a dozen government agencies to get the papers declassified.

A lot of the information has already been released — when defense contractor Daniel Ellsberg famously leaked it to The New York Times, and later in a heavily redacted version from the government. The papers catalog the nation's involvement in Vietnam, starting in the 1940s through 1967.

Tim Naftali, director of the Richard Nixon Presidential Library and Museum, says there wasn't a document that was a bombshell. "In a sense, it was the cumulative effect of seeing how the U.S. government put itself on this road to a foreign policy quagmire," Naftali says.

The impact of the release of the papers back in 1971 on the course of the Vietnam war has been debated. But Naftali says its impact on Nixon is more of a straight line.

Forty years ago Monday, Nixon woke up and looked at the front page of The New York Times. The day before, his daughter had gotten married.

"The New York Times had a picture of the president with Tricia Nixon Cox. It was on the left-hand side. And on the right-hand side there was a large headline about the release of a secret Vietnam archive," Naftali says.

In a phone call at around noon on June 13, Nixon spoke with Alexander Haig, assistant to the national security adviser.

Nixon asked about casualty numbers from Vietnam, and then inquired, "Nothing else of interest in the world today?"

"Oh, that? I see," Nixon said. "I didn't read the story, but you mean that was leaked out of the Pentagon?"

Nixon was clearly surprised. His relaxed tone in that conversation hardened over that day and in the days to come. The administration tried to block the Times and other papers from publishing, but the newspapers ultimately won in the Supreme Court.

Nixon created a special White House unit, known as the Plumbers, to investigate the leak, and Naftali says their break-in at the office of Ellsberg's psychiatrist was the beginning of the end for Nixon.

"That's where he puts himself on the road to resignation," Naftali says, because the Plumbers were a precursor to the Watergate break-in a year later.

As for what's new in the papers released Monday, historians will probably be digging for a while. The papers are physically available at three presidential libraries and the National Archives, and are also posted on the web for anyone to download.