Accessibility links
Stephen Colbert: On His Role In Stephen Sondheim's 'Company' The political satirist and comedian talks about his Broadway performance (and performance anxieties) and about his recent segments on The Colbert Report featuring Sarah Palin and Anthony Weiner. 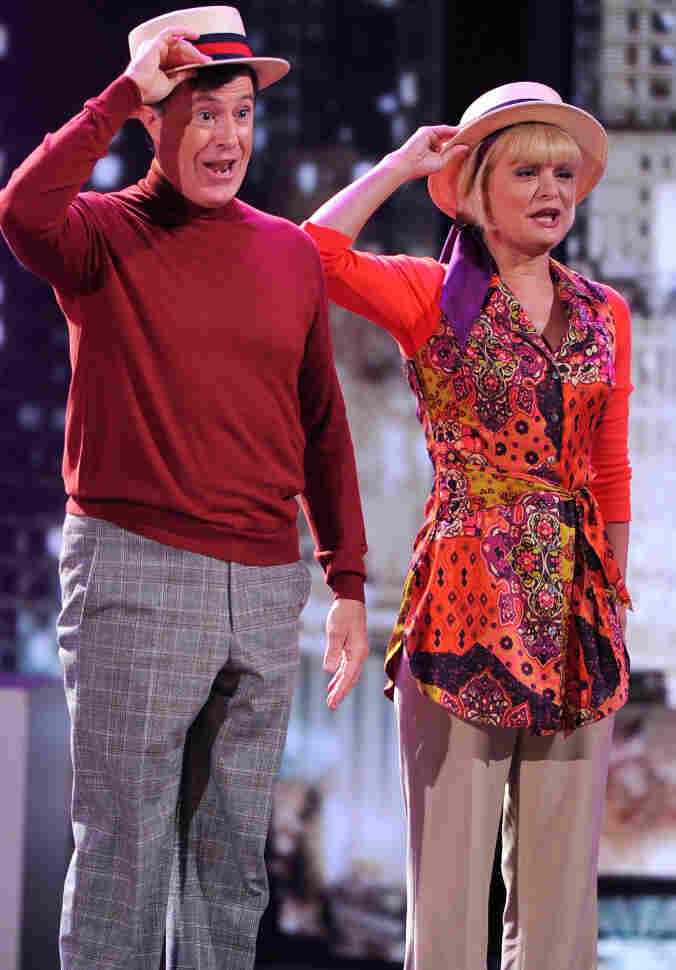 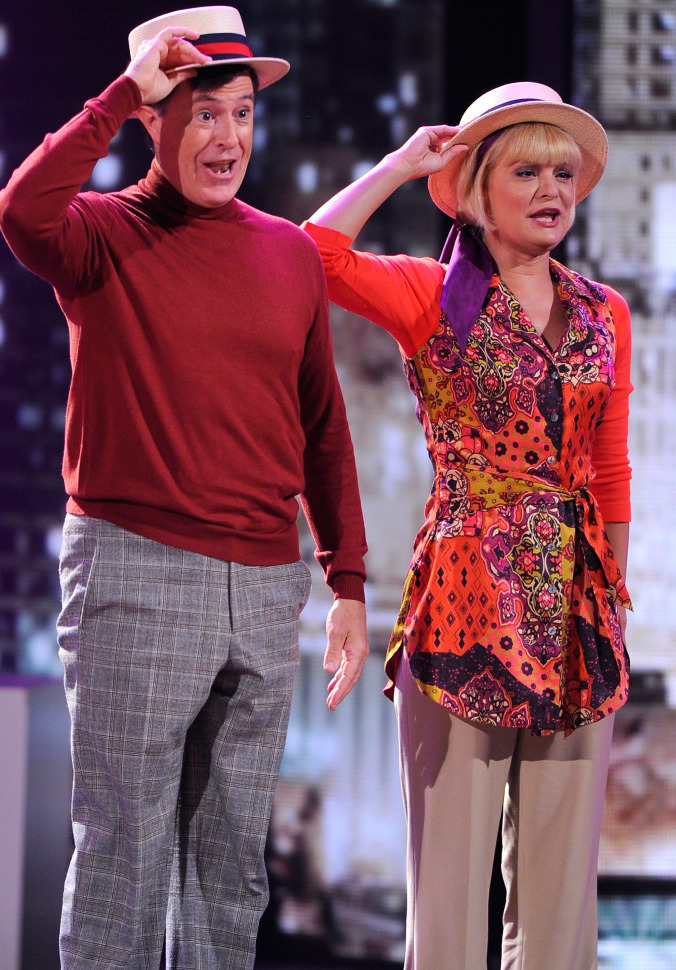 Stephen Colbert and Martha Plimpton perform a song from Company on stage during the 65th annual Tony Awards.

Stephen Colbert has run for president. He's testified before Congress, created a political action committee and assisted the U.S. Olympic speedskating team in the role of assistant sports psychologist. He has a spider named after him (the Aptostichus stephencolberti) as well as a Ben & Jerry's ice cream flavor (the Stephen Colbert's Americone Dream) and a NASA treadmill (the Combined Operational Load Bearing External Resistance Treadmill, or COLBERT).

And now, the political satirist and award-winning host of The Colbert Report can add a new line to his resume: Broadway star.

The comedian and television host recently grabbed a straw hat and cane and performed as Harry in the 2011 New York Philharmonic production of Stephen Sondheim's Company. The revival, which also starred Neil Patrick Harris, Patti LuPone, Christina Hendricks and Martha Plimpton, has been made into a film that plays this week in limited showings.

Colbert tells Fresh Air's Terry Gross that he didn't fake "a single smile" during the show's entire run. "It's what I imagined I would be doing when I went to theater school," he says. "It was such a bungee into an old dream to go do something like that."

Colbert, who attended the theater program at Northwestern University, says he's a huge musical theater fan and that it was always his intention to spend his life acting on the stage.

"I imagined myself living in New York in some sort of open, large but sparse studio apartment with a lot of blond wood and a futon on the floor and a bubbling samovar of tea in the background and a big beard — living alone but with my beard — and doing theater," he says. "That's what I thought my life would be. It has not been — and I love what I do — but to be asked to do this and then to accept the challenge of it. ... I can la-di-da my way through things ... but to sing Sondheim is a completely different beast."

Web Extra: Colbert's Training For His Hat And Cane Number

Stephen Colbert explains how he prepared for his tricky hat and cane dance number.

'They Put Us All Together Like Lego Pieces And We All Fit, Which Was Incredible'

Let Me Entertain You

It was Sondheim, in fact, who wanted Colbert to perform in Company. After appearing on Colbert's show, Sondheim invited Colbert to appear in the production. But Colbert's agent turned the role down, saying that there was absolutely no way Colbert could fit the limited engagement into his busy taping schedule. That's when Sondheim wrote Colbert a personal note.

"[He said that] against his instincts, he had a good time on my show and would I consider playing Harry in Company?" he says. "And he ended the letter with the sentence 'You have a perfect voice for musical theater.' And I read it to my wife and she said, 'Boy, you have to do this. No one, let alone Stephen Sondheim is going to ask you to do Sondheim.' And I said, 'You're right, I have to do it.' "

Once he was cast, Colbert started taking voice lessons and gained a new respect, he says, for professional singers. "What I rediscovered was the therapeutic nature of singing lessons," he says. "They're like doing yoga but for [the] inside of your body. You open up and use muscles that you don't think of as malleable. ... You can turn your head into a bell. ... That's what we kept working on: resonance and projection and relaxation and just remembering or relearning how to breathe through a phrase. The technical aspects of it are fascinating to go through in the lessons. And then you have to forget all of it, and sing."

Because of the cast members' busy schedules, most of the rehearsals were conducted via the Internet. Colbert was given recordings of his harmonies and told to practice them alone. The cast got together infrequently to rehearse lines and choreography — and then performed live at Lincoln Center with the New York Philharmonic.

"On one level, it was impossible," he says, of the limited-run engagement. "In another way, it was the only way it could have gotten done — because you couldn't have gotten all of these people to commit to doing Company. ... I literally left rehearsal for Company [one night] and went and did "Friday" on Jimmy Fallon and then went back to Company. It was just a tremendous experience." 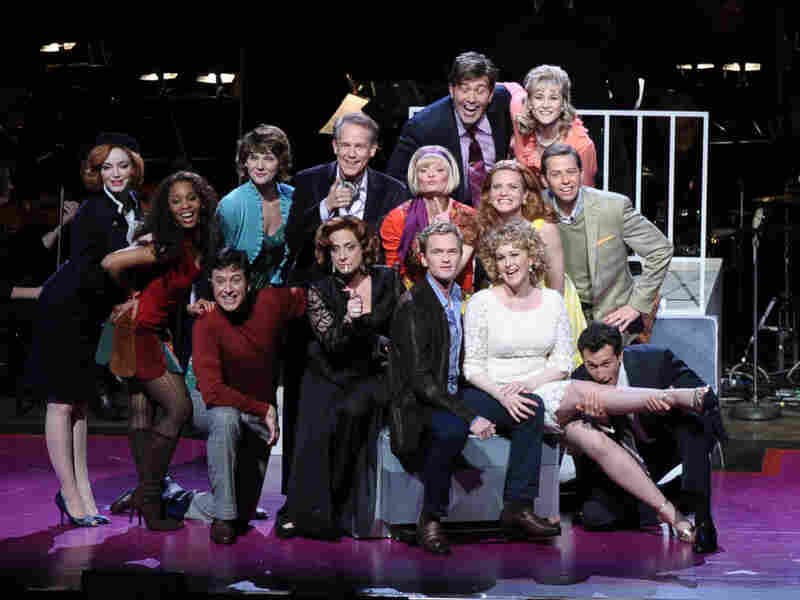 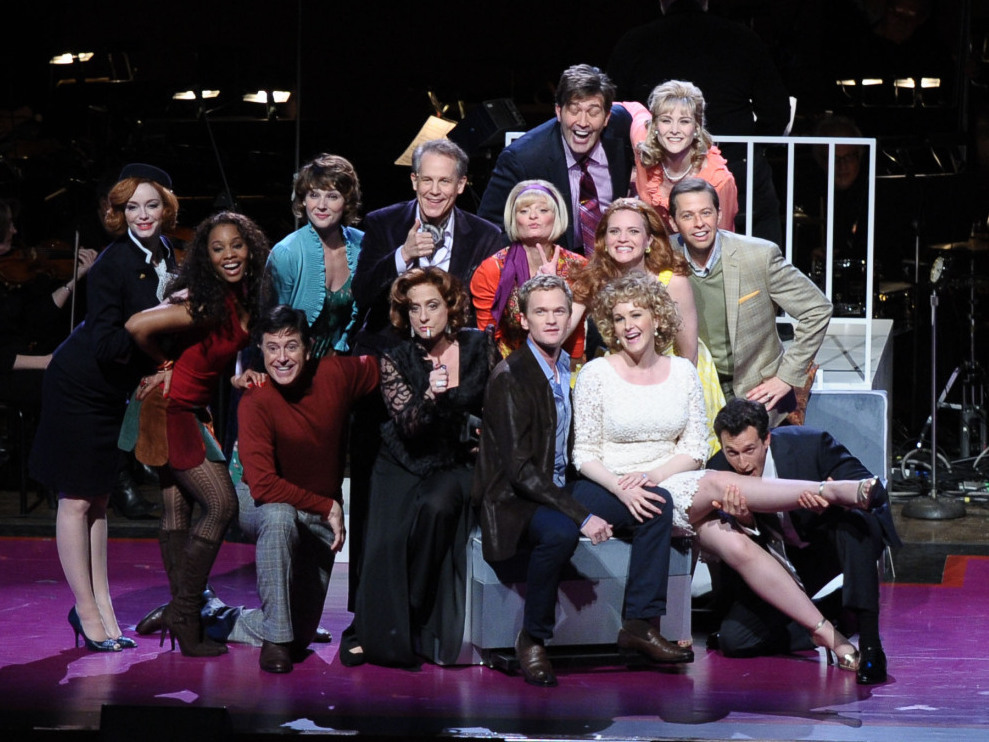 In The Company Of The Colbert Report

Colbert says he specifically chose not to mention his role in Company on his show The Colbert Report for two reasons. The first, he says, was to protect the production from any kind of "fake" endorsements.

The second reason he chose not to mention Company on his TV show, says Colbert, is that he was worried that his performance wouldn't live up to his expectations.

"I had no idea if I wanted anyone to know I was doing it, because I knew how hard it was going to be," he says. "I was afraid I would suck. I don't mind failing so much, but I am a perfectionist. ... If you're a perfectionist and you know you're about to do something at which you cannot be perfect ... then that is daunting because you know what your heart is like and the way you approach your work. ... It was difficult to say 'Hold onto your socks America, I'm singing Sondheim.' "

After the production's run, Colbert sent a note to Sondheim, thanking him for getting him into "the most joyous trouble" he's ever been in.

"I tell a lot of young performers, 'Go get in trouble. Go commit yourself to something you're not sure you can do,' " he says. "And I followed my own advice. It was something I desperately wanted to do — not as a career — but an invitation I knew I couldn't refuse and yet had no sense of whether or not I could do it. And that is trouble — but it was all so joyful. I'm very grateful to Mr. Sondheim that he got me in such trouble."

"I couldn't be more thrilled to find out that we ourselves were part of the content because it's my character's greatest dream — it's all he wants to do, is be the news. ... That's one of the reasons we ran for president in 2007-2008 because [my character] didn't like that the story was getting bigger than him. He has to be at the center of the story. One of the touchstones for the character is Bill O'Reilly, and years ago, I heard Bill O'Reilly say to President Bush, 'Guys like us.' And I thought 'Wow, he thinks of himself just equal to the president.'

"So my character thinks of himself as at least equal with any story and so while this Weiner thing was just consuming the world of news, to be part of it, to be in the reporting — to have my name in there — was a complete validation. As much as [my character] may demur and say he doesn't want to be associated with such unsavory details, in fact he was thrilled. I was, too, to have such a pure expression of his ego right there on paper."

"They can obviate the sin of it by playing our jokes. That's nice."

"That entire bit came around because my executive producer Tom Purcell said, 'Wait a second. Play that again. Did she just say 'warning shot'? That's completely a 19th or 20th century idea that you can fire a warning shot. That's a repeating rifle idea. You don't fire a warning shot with a muzzle-loading gun. It takes three minutes or something to load it. Why would you waste it on a warning shot? That's what 'Don't fire until you see the whites of their eyes' is about. We don't get a second shot.' So I said 'I should try to do that. I should try to show them how impossible that is. That's how it came about."

"People went crazy. Two days before I was supposed to go down there, they said, 'Can we confirm that you're coming?' And I said, 'Yeah, I like the speech we're working on and I'm prepared to do this.' An hour after they announced it, they were ready to cancel it because the press had gone crazy and Republicans had gone crazy. And I said, 'Well, just tell me now because I don't want to work on the speech for another 24 hours because we have a show to do.' And the congresswoman [in charge of the committee] was really nice. She said, 'No, I said that you can come and I'm going to stand by my word.'

"... So when [John] Conyers (D-MI) said, before anything started, 'I'd like you to submit your statement [and then leave before testifying],' I was really confused because I was told everything was fine. And I said, 'Are you asking me not to talk?' And he said, 'I'm asking you to leave.' And that's when I actually started getting not nervous because something was happening that I didn't expect — and I thought, 'Oh this is fascinating. This is far more interesting than I thought. I'm watching a fight that I don't know about and I'm the subject of the fight.' It's not an ego stroke but it makes you interested in the fight in ways that you can't imagine."

On his gratitude for the military

"There is a residual sense for me, having grown up in the early '70s, that I did not know I had, which was a sense that the military are different than I. Because there was such a divide between the military world — and there still is, because there's no draft — and the civilian world is one of the rotten harvests of the Vietnam War, was this sort of bifurcation of America in that way.

"There was sort of a negative association with the military. Maybe growing up in the South or being in a family with members of the military, I didn't have that negative connotation, but I did have this 'separate' connotation. I was ashamed to realize I had it and did not realize I had it until I was [in Iraq]. I was so impressed by the people I met over there and there was just a sense of connection and gratitude towards those people.

"I called my daughter from Baghdad and she said, 'What's it like, Daddy?' And I said, 'Well, honey, however you feel about the war, when my show started, this was the worst place on Earth in 2005. And these young men and women have worked hard to make it someplace that might be a functioning democracy someday and you cannot help but feel proud for your nation in ways that I never have before.' "