Accessibility links
The Art Of Mimicry: A 'Trip' Down Memory Lane The Trip, a British comedy featuring two comedians trading their best celebrity impersonations, got critic John Powers thinking about memorable voices from the movies. Famous celebrity voices, he says, are not what they used to be. 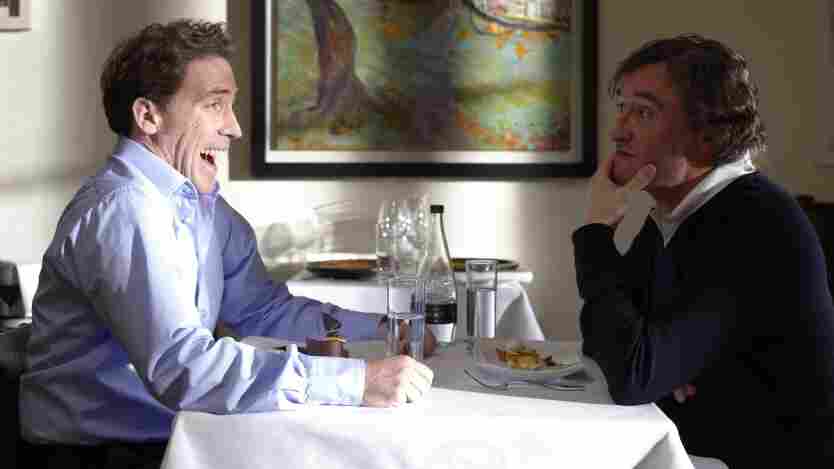 A few nights ago, I put on Warner Home Video's new Blu-ray of one of my favorite adventure films, The Man Who Would Be King. Based on a story by Rudyard Kipling, this 1975 tale stars Michael Caine and Sean Connery as two roguish British soldiers who scam their way into taking over the country of Kafiristan. It's a terrific movie, and as it unfolded, I was struck that Caine and Connery have been part of my life since I was a kid. I could recognize their voices in my sleep.

Watch Clips From 'The Trip'

I'm hardly the only one. I was reminded of this when I saw The Trip, a hilarious new road movie starring two brilliant comics. One is Welshman Rob Brydon — whose vocal trick called "Small Man in a Box" is itself worth the price of admission. The other is Steve Coogan, an Englishman best known in the U.S. for minor roles in movies like Tropic Thunder but worshipped in Britain for creating Alan Partridge, an inept talk-show host who's the hero of some of the funniest TV shows of all time.

The Trip has no plot. It's just Coogan and Bryden driving around northern England eating at posh restaurants, mocking foodie-ism and trying to one-up each other. And nowhere are they more competitive than in their impersonations of the British actors they grew up with — Caine and Connery.

Now, in a way, The Trip is terribly up to date. In having Coogan and Bryden play heightened versions of themselves, it works the same fiction-versus-reality turf as the books of W.G. Sebald or shows like Jersey Shore. Yet what makes the movie a blast could hardly be more old-fashioned. The Trip harks back to when movies, still not far removed from vaudeville, showcased stars who were able to do acts — Chaplin and Keaton's immaculately tooled slapstick, Astaire and Rogers' ethereal gliding, or poor, doomed Judy Garland singing audiences over the rainbow.

Good mimicry is kissed with the uncanny. Whether it's Tina Fey doing Sarah Palin or Jimmy Fallon's Neil Young, we hear the right voice coming from the wrong body. And in the process, we're shown something new about the person being mimicked.

Of course, mimicry is not the world's most exalted talent, but I would cheerfully spend a whole night watching Bryden and Coogan do their warring James Bonds. This isn't simply because I am myself the world's worst mimic — I once reduced my sister, Becky, to hysterics with my hapless Howard Cosell, perhaps the all-time easiest person to impersonate. It's because good mimicry is kissed with the uncanny. Whether it's Tina Fey doing Sarah Palin or Jimmy Fallon's Neil Young, we hear the right voice coming from the wrong body. And in the process, we're shown something new about the person being mimicked.

The Trip got me thinking about which of today's movie voices I can instantly hear in my mind's ear — Woody Allen and Clint Eastwood and Morgan Freeman. Which is to say, old guys, like Connery and Caine. As for the young ones, can you "hear" Brad Pitt's voice right now, or Angelina Jolie's? This year's Oscar winner Natalie Portman is a superb actress, but I can't remember what she sounds like as I can with Bette Davis, Lucille Ball or Marilyn Monroe.

More On Coogan, Brydon And 'The Trip'

Steve Coogan: From a Partridge to 'Cock and Bull'

Some of this is because movie stardom has changed. Hollywood once promoted stars whose selling point was a persona, an individualized, even eccentric style that played to working-class adults. Such style meant having trademark voices, accents and locutions that instantly called up a universe of feeling, from Mae West's lewd growl to Jimmy Shtewart's homeshpun decency. In contrast, today's stars either work in movies for middle-class teens — where conformity is largely the rule — or take pride in being chameleons. Daniel Day-Lewis and Meryl Streep don't want to sound like themselves.

That said, the key reason I can imagine Katharine Hepburn's voice but not, say, Katherine Heigl's is simple longevity. Today's stars do have shorter shelf lives — just ask Kevin Costner — but I can well imagine that, 25 years from now, there will be another movie in which comics sit around the table and swap their impressions of grizzled old stars like George Clooney, Denzel Washington and Leonardo DiCaprio. And if there is, I can promise you one thing: I'll pay to see it.