Accessibility links
LeBron Chokes On Court; Media Choke On His Words Journalists couldn't transform any of LeBron James' maddeningly misfired fade-away jumpers into triumphant jams. But we can at least take his words and shade, interpret and massage them a bit until they gain a clarity that his explanation, like his game, lacked in real life.

LeBron Chokes On Court; Media Choke On His Words

LeBron Chokes On Court; Media Choke On His Words 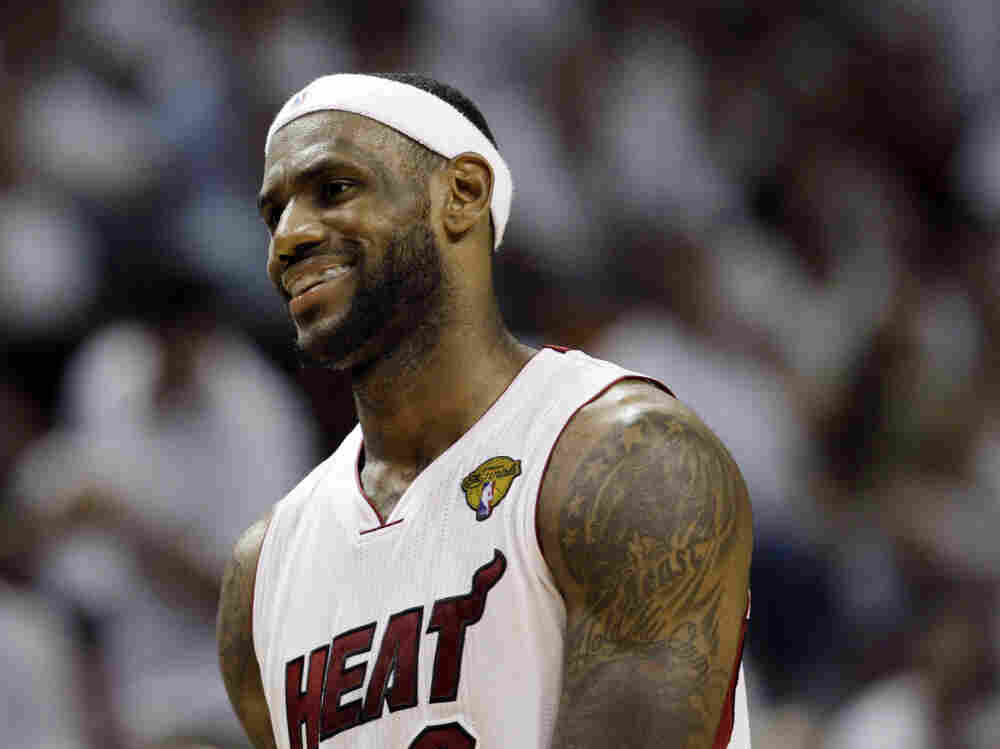 Miami Heat's LeBron James reacts during the second half of Game 6 of the NBA Finals basketball game against the Dallas Mavericks on Sunday. David J. Phillip/AP hide caption 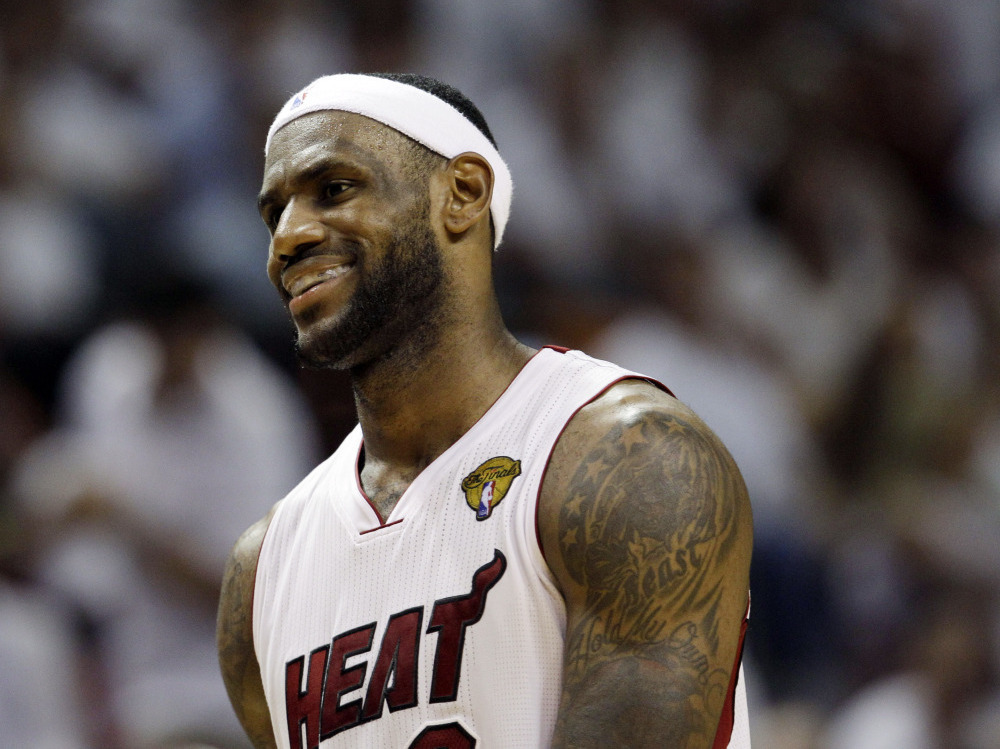 Miami Heat's LeBron James reacts during the second half of Game 6 of the NBA Finals basketball game against the Dallas Mavericks on Sunday.

"LeBron Lashes Out," read the words on ESPN's screen, part of its scroll of headlines that fall like droplets from an icicle, reassuring sports fans that highlights of a game they care about are no more than three or four drip, drip, drips away.

I was a little worried. I was at LeBron James' news conference Sunday night, and had scrutinized both James and Dwyane Wade in person, then went back, read over the transcript and finally selected a few choice words for inclusion in my coverage of the Heat's loss in Game 6. Did this lashing out occur afterward? In a private moment caught by some rogue camera? Via Twitter?

No, the "lashing out" was part of an answer that I regarded as temperate, pleasant and elusive — as James always is in these news conferences.

"Does it bother you that so many people are happy to see you fail?" James was asked.

He replied: "Absolutely not. Because at the end of the day, all the people that was rooting on me to fail, at the end of the day they have to wake up tomorrow and have the same life that they had before they woke up today. They have the same personal problems they had today. I'm going to continue to live the way I want to live and continue to do the things that I want to do with me and my family and be happy with that.

"They can get a few days or a few months or whatever the case may be on being happy about not only myself, but the Miami Heat not accomplishing their goal, but they have to get back to the real world at some point."

Let's pause for a moment to consider what any rational person would do when confronted with the premise "so many people are hoping you fail." This is a preposterous position to adopt toward any public figure this side of Ratko Mladic. Alas, we understand that sports should be about the thrill of victory, but sometimes we thrill to the defeat as well. James knew not to rebut the premise. Yes, he was unpopular. He did not contextualize the notion, did not say, "It is true they root against me, though I have never been arrested, been accused of a crime, been involved in a sex scandal, been fined for using slurs, been surly, been a bad teammate, been a bad son, been a bad father, been violent in any way, been churlish or boorish or curt as is the habit of many others in my line of work."

He would have been accurate to do so. Instead, he offered the above words, which could be interpreted in a number of ways. Among them:

1) If people want me to fail, that's up to them. I'm going to keep leading my life — a life which I enjoy.

2) If people want me to fail, it is because they don't see me as a real person, but as a character in a drama, but I am real, just as the people who want me to fail are real.

3) If people want me to fail, my supposed failure will not make them happy, because it seems that it takes a fair amount of bitterness at a person's core to desire another to fail.

To be honest, when I heard James give his answer, I thought he approached the danger zone of blaming the pro-failure cohort. Nothing about his response warrants the description "lashing out," but I thought that if he were to have gone a step or two further, he would be telling his detractors to get a life. I guess James' failure to actually criticize the hate horde was inconvenient for the media, so they just acted as if he had.

Overall, the postgame news conferences after the Heat's victories or failures (sweet, sweet crowd-pleasing failures) were small spectacles during these finals. After one game, I "challenged" James' interpretation of events and was hailed by websites and my fellow journalists alike for being a sort of truth-teller. A few games later, Gregg Doyel, columnist for CBSSports.com, asked James, "LeBron, three games in a row for you fourth quarter — not much. That's the moment superstars become superstars. Seems like you are almost shrinking from it. What's going on?"

Doyel's question was the general exception to the postgame news conference, in that it was phrased to get a rise out of a player. That question, like my question, the hater question, even a "Did you choke?" question asked of James and Wade were all fair game. Some yielded very good answers.

But in Doyel's podcast, the columnist said James "blew him up" with a great answer. Which was: "I think you're concentrating on one side of the floor. All you're looking at is the stat sheet. Honestly, I'm a two-way player. Since D-Wade had it going offensively, so we allow him to handle the ball, bring it on offensively. You should watch the film again and see what I did defensively. You'll ask me a better question tomorrow."

"The second half [of LeBron's answer] killed me; the first half was weak ... he kicked me in the teeth," Doyel admitted.

Doyel is a button pusher, and his gladiatorial conception of a news conference where either questioner or answerer kills the other isn't shared by most of the people asking questions.

Many athletes, and most members of the public, do seem to think that's what news conferences are about — an accusatory back and forth whose purpose is venting, not generating information. Politicians who want to avoid news conferences say they're just opportunities for journalists to preen. Sometimes they are. But usually the question-and-answer sessions actually do provide insight and information, even as they generate the quotes that launch a thousand blog posts.

And while journalists couldn't transform any of James' maddeningly misfired fade-away jumpers into triumphant jams, we can at least take his words and shade, interpret and massage them a bit until they gain a clarity that his explanation, like his game, lacked in real life.