Accessibility links
Texas Gov. Perry Ratchets Up Conservative Credentials In the past two weeks, Rick Perry has gone from ridiculing journalists' questions about a possible run for president to openly considering it. Perry is known as a fiscal conservative first and a social conservative second. But lately he has made a concerted effort to burnish his social conservative credentials. 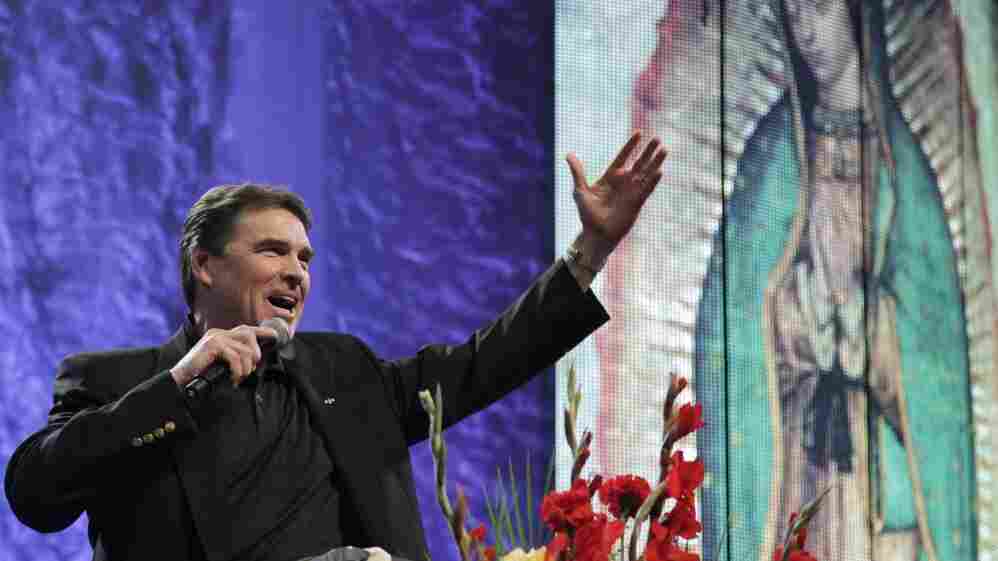 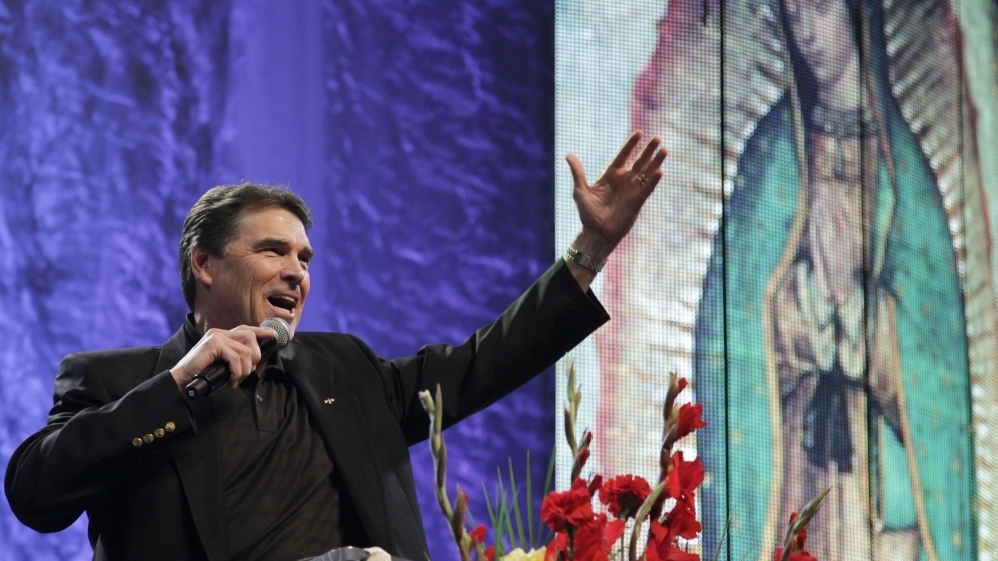 Texas Gov. Rick Perry speaks during a United for Life event organized by a Hispanic anti-abortion group at the Los Angeles Memorial Sports Arena on Sunday.

Seven Republican presidential contenders squared off in a debate in New Hampshire on Monday night. There are, however, still a number of big names on the sidelines, including Texas Gov. Rick Perry.

Perry has been coy about a possible run, but speaking before a group of anti-abortion Hispanics in Los Angeles over the weekend, he sure sounded like a candidate.

"Within the first week in office, President Obama, he chose to overturn the Mexico City Policy, which basically means that your federal tax dollars can now be used to fund abortion all over the world," Perry told the crowd.

Perry started out his political life as a Texas Democrat, but as Texas has moved further to the right, so has Perry. And in the past year, he's become a favorite among Tea Party supporters across the country.

In the past two weeks, the governor has gone from ridiculing journalists' questions about a possible run for president to openly considering it.

And last week, he announced a day of prayer and fasting at Reliant Stadium in Houston on Aug. 6. He invited the nation's governors to attend. For this event, Perry is partnering with the Christian advocacy group the American Family Association, known for its strong opposition to gay rights.

"He's got access to the money, pretty good on the stump," says Bruce Buchanan, a political science professor at the University of Texas who specializes in presidential politics. "He's got the kind of policy positions and track record that appeals to the Republican financiers and the Republican primary electorate."

Buchanan wonders whether another Texas governor could be elected president so soon after George W. Bush. And how about a candidate as right wing as Rick Perry?

"The Republican Party itself is trying to decide whether it wants to be a party that is ideologically pure or one that has a chance to beat Obama," Buchanan says. "Perry thinks he can address that, but I think he's going to have his hands full trying to address that, given his policy stances."

Perry and the Republican-dominated Legislature closed the state's $27 billion budget shortfall largely on the back of public education.

In reaction, the governor has become a favorite of conservative talk radio hosts across the country. Perry rails against Washington, D.C. He paints the federal government as a source of evil, even sympathizing with conservative Texans who might wish to secede.

Buchanan questions whether Perry truly would want to trade his good life in Austin for the big time in the nation's capital. After all, it didn't work out so well for his predecessor.

"Right now, everybody's eager to talk to him," Buchanan says. "He's a hero. He gets all kinds of publicity. This might set him up for a better chance to win in 2016 than any Republican might have in 2012."

The smart money in Austin says Rick Perry will indeed soon throw his hat into the ring.

But Buchanan says if he had to lay money, he'd bet against Perry in 2012, and instead double down on Perry for president five years down the road.