Accessibility links
This Is Your Brain On Ads: An Internal 'Battle' Youth Radio's Maya Cueva says her mother always taught her to never surrender to the manipulative ways of advertising. But recently, she had been wondering how much control she has over her thoughts. So she went to the corporate headquarters of NeuroFocus, a pioneer in the business of neuromarketing, to find out.

My Brain On Ads from Turnstyle Video on Vimeo

For decades, social scientists have tried to determine how TV advertising affects the children and teenagers who watch them. Do commercials make kids more materialistic? Are fast-food ads responsible for childhood obesity rates?

So I wanted to find out what's going on in the brain when kids watch a TV ad.

I am at Walgreens in the hair product aisle. There are a lot of brand-name shampoos on the shelf, but there's one that always catches my eye — Tresemme.

I've probably seen the ad a hundred times and didn't think it could affect me. Not after all my mom has taught me to never surrender to the manipulative ways of advertising.

"I realized kids were living in a whole other world that was influencing them more than I was," my mom says.

She's a therapist. When I was in second grade, she started an after-school class where she had kids analyze TV shows and commercials.

"The kids were used to just going into that zone where you just stop thinking and just watch," my mom says. "So this interrupted that and made people stop watching and start thinking."

How The Brain Responds

But recently, I've been wondering just how much control I have over my thoughts, when it comes to ads — which is how I found myself in this Berkeley, Calif., lab wearing a hat of electrodes. The lab technician tells me she's going to place an EEG cap on my head. It looks like a swim cap with a wire attached to my nose. 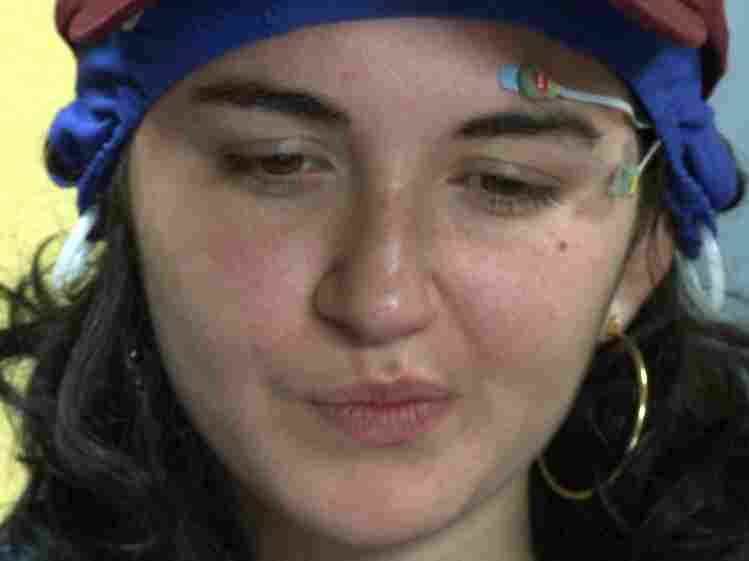 Maya wears the EEG cap and watches the commercial at the headquarters of NeuroFocus in Berkeley, Calif. Courtesy of Youth Radio hide caption 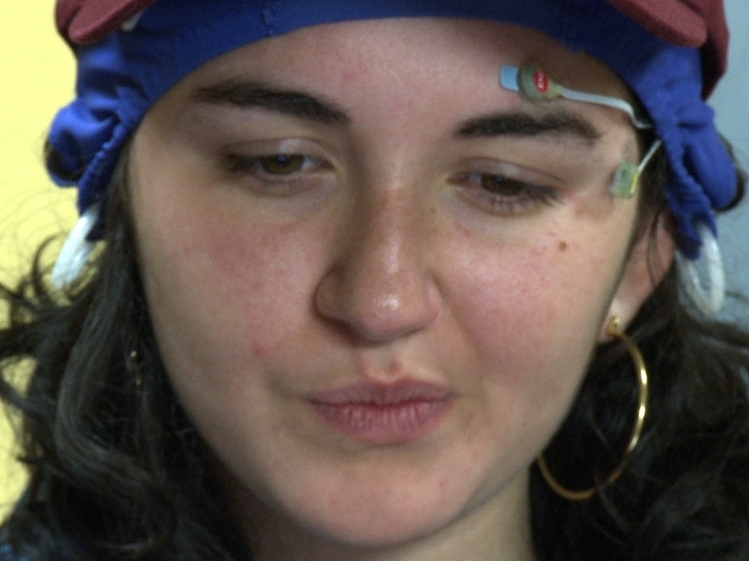 Maya wears the EEG cap and watches the commercial at the headquarters of NeuroFocus in Berkeley, Calif.

I'm in the corporate headquarters of NeuroFocus, a pioneer in the business of neuromarketing. It makes some scientists antsy, but they claim they tell advertisers how to make better commercials by replacing focus groups with an electroencephalogram. Kind of like how a microphone is picking up the sound waves of my voice, the EEG strapped to my head is picking up brainwaves created by the electrical activity that passes between neurons when my brain processes something, anything — even commercials. That includes one NeuroFocus uses to demo its technology.

As Morgan Freeman's "God-like" voice narrates a Visa commercial on the Olympics, I watch images of a torch-lighting ceremony, a figure skater, hockey players. Meanwhile, in a neighboring control room, lab director Mark Kishiyama shows my producer a series of squiggly waves that appear on a screen.

"This is her brain activity right now, real time," Kishiyama says. "When you're watching ads, and so forth, you're kind of passively watching it, but your brain is responding to it. So it's not always conscious."

It's subconscious, or "nonconscious," Kishiyama says. "But the awareness is still there."

You think a 30-second ad is so fast it's not going to get in. But it does.

Mark Kishiyama, lab director at NeuroFocus, a pioneer in the business of neuromarketing

That awareness shows up on the EEG as tall peaks in the parts of my brain Kishiyama says are associated with emotion, attention and memory. Those parts get busy at certain moments in the ad — at the beginning with the torch and figure skater and then later when a Visa card appears on-screen.

He says it's evidence that my brain is making a nonconscious link between the credit card and the Olympics.

Advertisers will use Kishiyama's data on the most effective moments in an ad to compress it down to a 10-second Web video for sites like YouTube. In theory, you'd see a lot more brain-wave peaks per second as they pack this message into your head. But the question remains: What happens once it's in there?

"You can literally witness this battle going on," says Ben Hayden, a neuroscientist who studies decision-making. He told me about researchers at Caltech who scanned the brains of people on diets while offering them junk food. A certain region of the brain lit up when the dieters resisted junk food. Hayden says that self-control region is in a tug of war with the parts of the brain affected by ads.

"When advertising comes into the picture, it kind of is the opposite of self-control," Hayden says. "It encourages you to just go out and buy it, just do it." 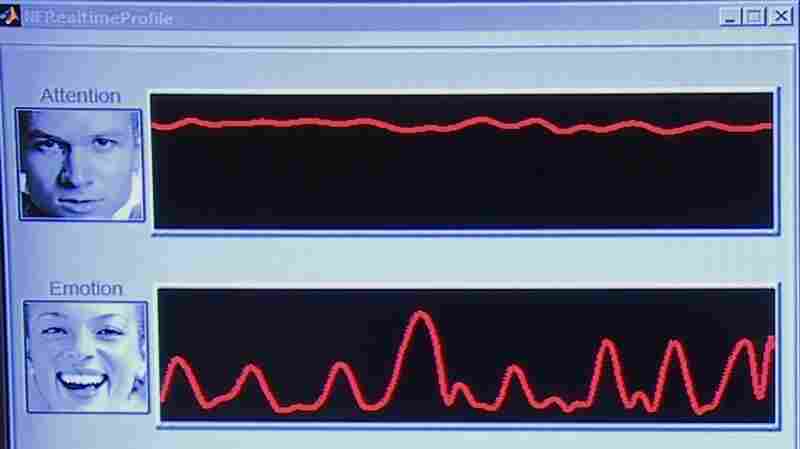 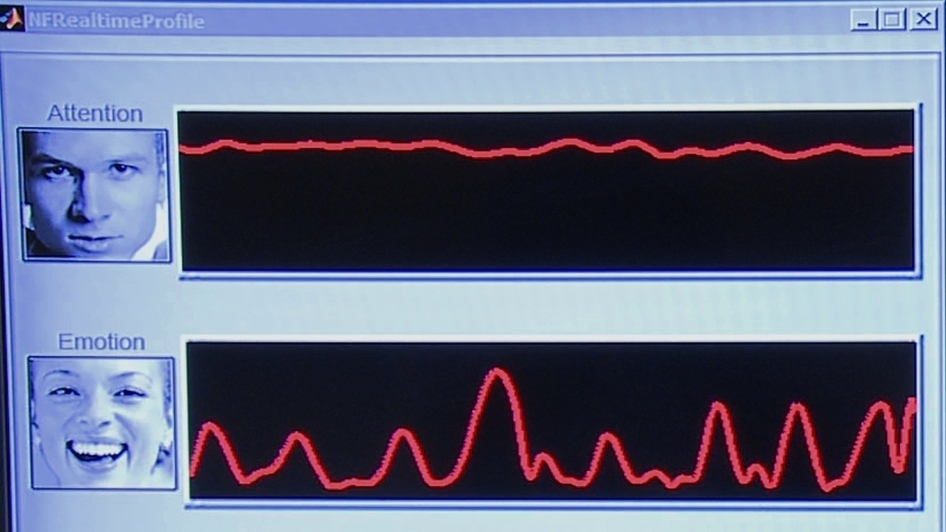 These are Maya's electroencephalograph (EEG) results while viewing a Honda commercial.

If he scanned my brain while I was in that shampoo aisle, Hayden says, he would see lots of activity in the "just do it" region as I grab the Tresemme. But just as TV ads prime that part of the brain, it turns out the kind of training my mom gave me could boost the signal in the "just say no" region. It's what Mom was telling me all along.

"So I wouldn't worry so much about how whether your brain will react. It's more what decisions you make after your brain reacts," my mom says.

"So you think that I still could consciously not buy a product?" I ask her.

"Yes, I think so, because I know how thoughtful you are and how well-educated you are," she says.

OK, so maybe my mom's biased. But there's some neuroscience to back her up. Hayden says I could be better off than most teens, because every time I think critically about how ads work, I create new patterns in my brain that strengthen the self-control regions. The ads might get inside my brain, but they don't have to decide what I do.

Nudging Grocery Shoppers Toward Healthy Food Nov. 8, 2010
Most People Notice Drug Ads, But Few Get Prescriptions Because Of Them July 1, 2010
One Teen's Struggle To Quit Smoking Nov. 6, 2008