Accessibility links
Egypt's Secret Military Trials Erode Trust Chants of "The army and the people are one" could be heard in Tahrir Square during Egypt's revolution this spring. But the sense of respect that activists held for the military has dwindled as more people have been arrested and subjected to secret trials, a continuation of a Mubarak-era practice. 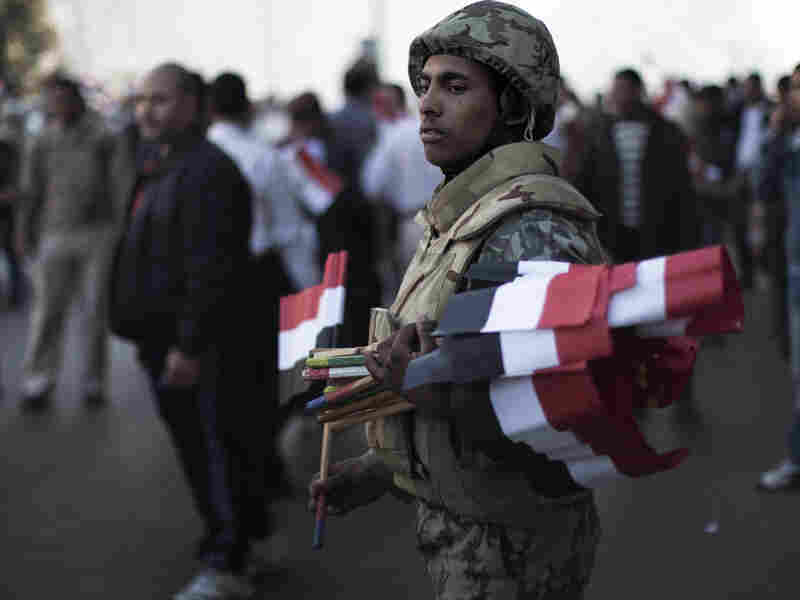 A soldier gives demonstrators flags on Feb. 18 as they enter Cairo's Tahrir Square for celebrations marking one week since Hosni Mubarak was forced from office. Goodwill between activists and the military has dwindled as some of Mubarak's practices of silencing critics continue. Marco Longari/AFP/Getty Images hide caption 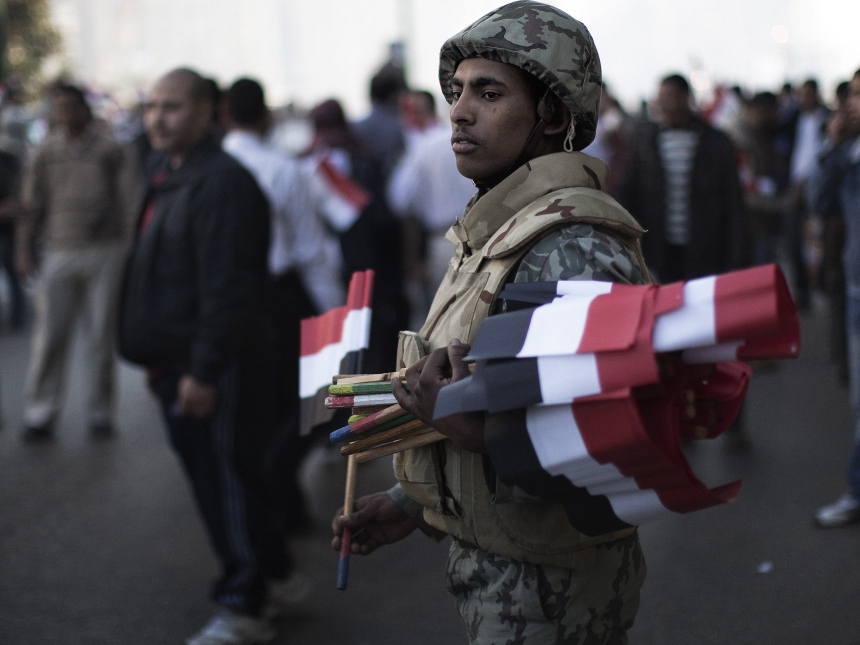 A soldier gives demonstrators flags on Feb. 18 as they enter Cairo's Tahrir Square for celebrations marking one week since Hosni Mubarak was forced from office. Goodwill between activists and the military has dwindled as some of Mubarak's practices of silencing critics continue.

Many of the middle-class Egyptian youth who spearheaded the efforts to oust dictator Hosni Mubarak say one of the biggest threats to the revolution today is the ruling junta's use of secret military trials. It's estimated that at least 7,000 people — including protesters, bloggers and dissidents — have been jailed by the army since Mubarak stepped down.

Youth activists are now pressing the Egyptian military to transfer those cases to civilian courts and investigate allegations of abuse and torture by military police.

Every political slogan is laced with propaganda, but during Egypt's revolution the frequent Tahrir Square chant, "The army and the people are one" had real meaning. People didn't just hope; they trusted the military to support their risky push for justice and basic freedoms.

But four months into military rule here, critics say the military has continued the Mubarak-era practice of silencing dissidents with hasty trials in closed military courts.

"It is only a violation of our rights as Egyptians, and we deserve better," says Tarek Shalaby, a 26-year-old Egyptian blogger.

Shalaby was protesting peacefully last month outside the Israeli Embassy in support of Palestinian statehood when Egyptian military police cuffed him and took him away.

Egypt After The Tevolution

He was charged with violating the prohibition on public gatherings, among several other charges, and taken to a military prison and quickly put on trial.

"Basically [we] had no representation," Shalaby says. "There wasn't even the ability to ask for one. They already assign you a lawyer, who is part of the military himself, but he's not actually there. It's just like his ID is there on the table."

Shalaby got a one-year suspended sentence, but others haven't been as lucky. Rights groups here estimate that there are still dozens of protesters behind bars.

Amr al-Beheiry is one of them. He was beaten and arrested in late February during a sit-in against the interim government, and he's now serving five years in a military prison for allegedly breaking curfew and assaulting a public official.

Amnesty International reports that Beheiry may have been beaten and tortured with electric shocks while in military custody.

Five oil-field workers recently arrested during a labor strike also are stuck in a military prison.

'No Change In The System'

Blogger Shalaby says he now doesn't trust the army to guide the country to free and fair parliamentary elections, scheduled for September. He charges that repression by the Supreme Council of the Armed Forces, headed by Field Marshal Hussein Tantawi, is undermining the core values of the revolution. 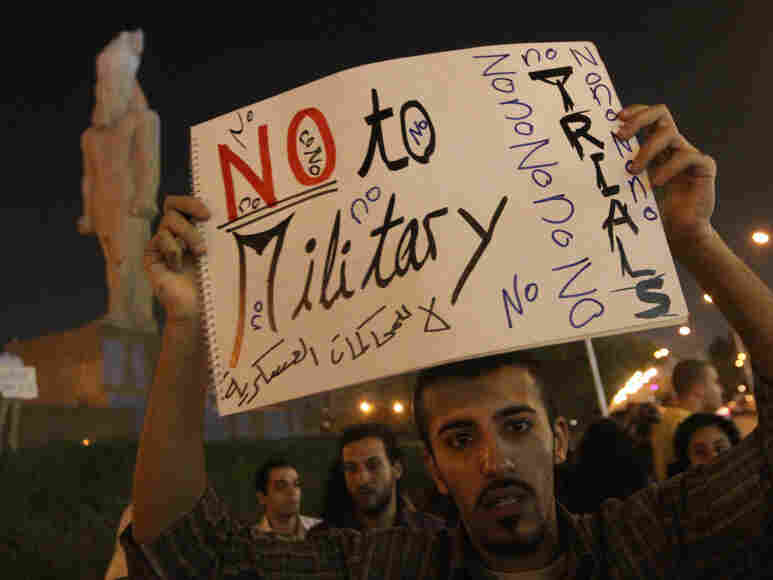 A man holds a placard protesting military trials at a demonstration in front of a building where the high military council met with youth groups on June 1. Khaled Desouki/AFP/Getty Images hide caption 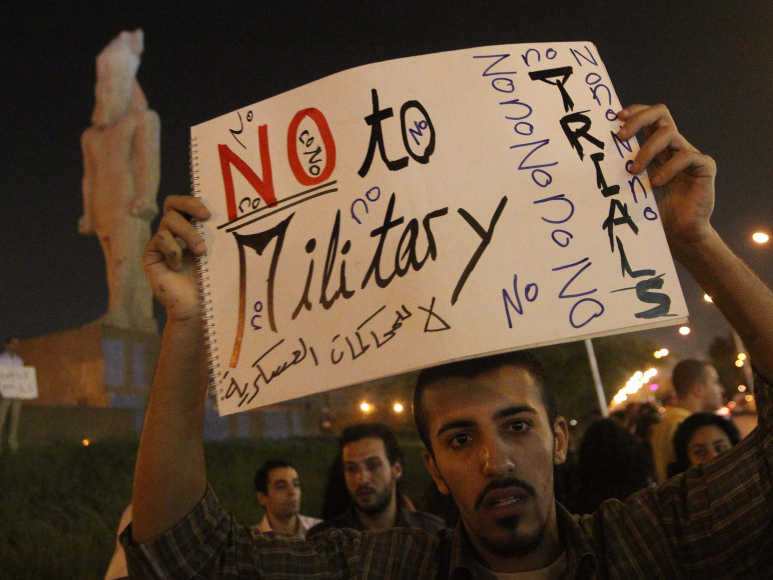 A man holds a placard protesting military trials at a demonstration in front of a building where the high military council met with youth groups on June 1.

"They have decided there will be no change in the system; we'll just change some names, maybe improve little things here and there," Shalaby says. "We will not be able to succeed in our [Jan.] 25 revolution until we completely get rid of the current setup of the SCAF, especially led by Tantawi and by Sameh Inan and the rest of the corrupt dictators, if you will, that are part of that council."

The Egyptian military didn't respond to requests for comment. Anonymous military representatives have phoned into Egyptian news shows defending military trials as necessary to curb a spike in crime and to maintain order.

The army has used that security argument to justify the more than three decades old "emergency law" that to this day gives security forces sweeping powers.

Mona Seif, with the new rights group No Military Trials for Civilians, met with representatives of the army for more than five hours Monday. Seif said the group demanded an investigation into allegations of abuse and torture by military police and for all civilians in military custody to be retried in civilian courts. They also suggested that nonmilitary judges should evaluate all the cases and make a public recommendation.

"Always part of the issue is that you don't just demand ... you give them practical solutions," Seif says. "So they promised they are going to look into it and discuss it."

But Seif says that while the army seemed genuinely open to dialogue, it offered no guarantees. She added that this is not the first time the army has promised to take criticism seriously.