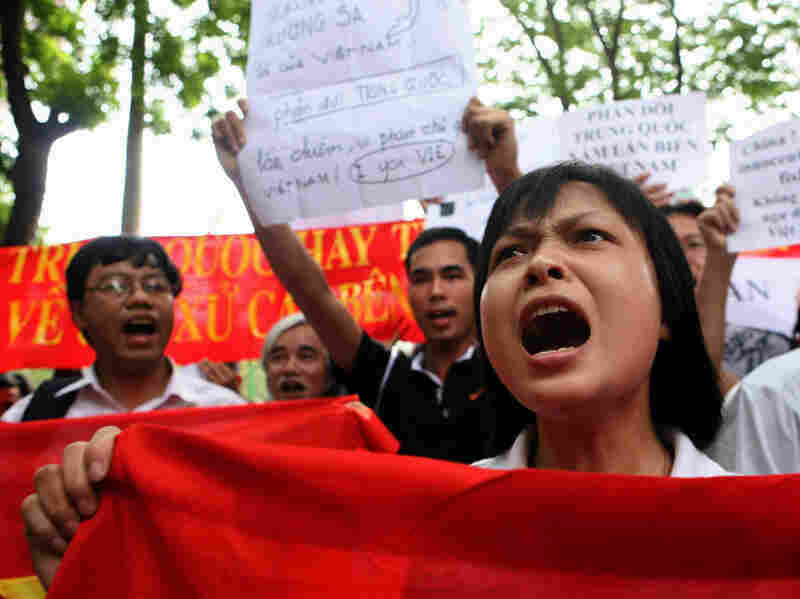 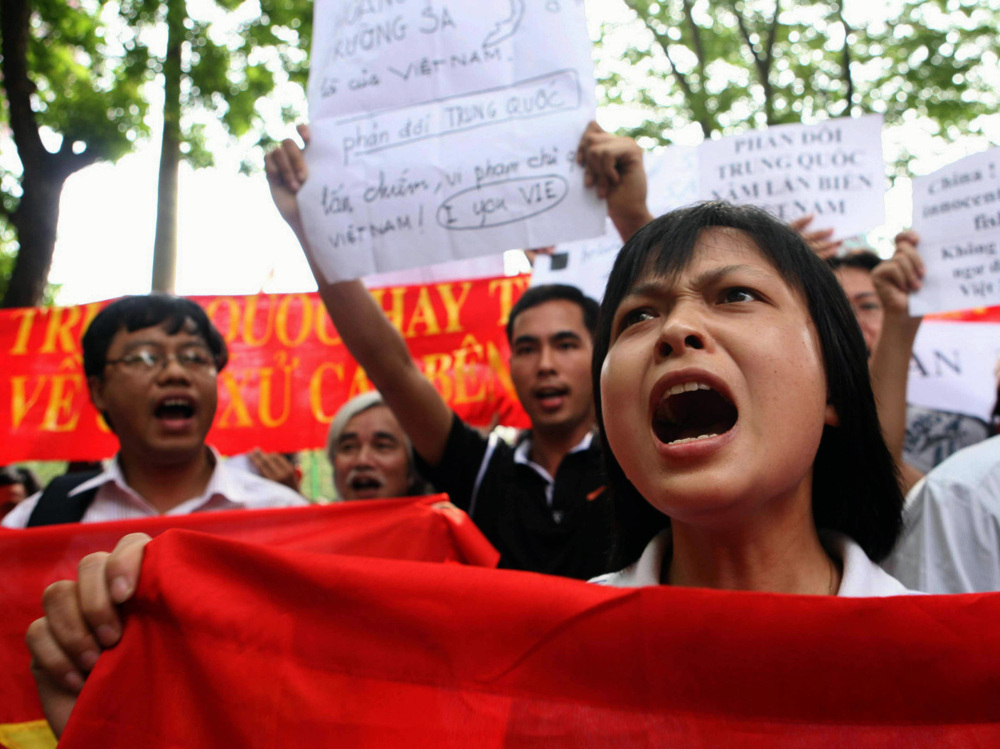 Protesters shout anti-China slogans in front of the Chinese Embassy in the Vietnamese capital, Hanoi, on Sunday.

Tensions are ratcheting up in the South China Sea after a confrontation between Chinese and Vietnamese vessels.

China said Tuesday it would not resort to the use of force. And in a message aimed at the U.S., it warned other countries to stay out of the escalating dispute.

For the past two weekends, anti-Chinese protesters have demonstrated in Vietnam. The protests in the tightly controlled communist country were the biggest in four years. Anti-Chinese anger is growing following two occasions in recent weeks when Hanoi accused Chinese ships of cutting cables belonging to Vietnamese oil survey vessels. China claims almost all the South China Sea; it's accusing Vietnam of violating its sovereignty. Bilateral ties are in crisis.

"This is the most serious [situation] ever in terms of bilateral relations since 1991 when countries agreed to put past issues aside and start to build good relations," said David Koh, a Vietnam expert at Singapore's Institute of Southeast Asian Studies.

Vietnam's response to the situation: nine hours of live-fire exercises off its coast. For its part, China is playing down Vietnam's drills.

"Some country took unilateral actions to impair China's sovereignty and maritime rights and interests, and released groundless and irresponsible remarks, with the attempt to expand and complicate the disputes over the South China Sea," he said, speaking through a translator.

This is the most serious [situation] ever in terms of bilateral relations since 1991 when countries agreed to put past issues aside and start to build good relations.

At the bottom of all this is mineral wealth. The disputed area is thought to hold large deposits of oil and gas. Vietnam has asked for international help over the dispute, something China firmly opposes. Chinese officials were outraged last year when U.S. Secretary of State Hillary Clinton offered to help mediate talks about the South China Sea.

Some Chinese academics, like Ji Qiufeng from Nanjing University, accuse the U.S. of using Vietnam for its own purposes.

As to what stance China should take, Ji is uncompromising.

So how bad could it get? China says it won't use force to solve the problem. But all the action is happening at sea between unofficial proxies like survey ships and fishing vessels. Under such circumstances, matters can spiral out of control very fast indeed.

Koh says skirmishes on the high seas could well happen.

"We are not talking invasion or fully fledged naval war," he said. "We are talking about confrontations between small group of ships, shooting and fighting each other."

The dispute is widening. The Philippines is also accusing China of acting aggressively in the disputed Spratly Islands. It too is requesting U.S. help. Taiwan is also turning up the heat, insisting it will send patrol boats to the Spratly Islands, which it also claims. With the diplomatic temperature rising higher, a long, hot summer of confrontation could be ahead.