Accessibility links
South Sudan Works To Aid Wildlife That Survived War Two decades of civil war wiped out much of South Sudan's wildlife — but not all of it. Surprisingly, large herds of antelope and elephant remain. Now conservationists are tracking animals across the lush landscape to try to save them from poachers and the impact of development.

South Sudan is poised to become the world's newest country in just a few weeks. Two decades of civil war cost more than 2 million lives and wiped out much of the region's wildlife — but not all of it.

A few years ago, conservationists made a surprising discovery: large herds of antelopes and elephants. The government of South Sudan and the New York-based Wildlife Conservation Society are now trying to protect animals that were once thought lost to war. 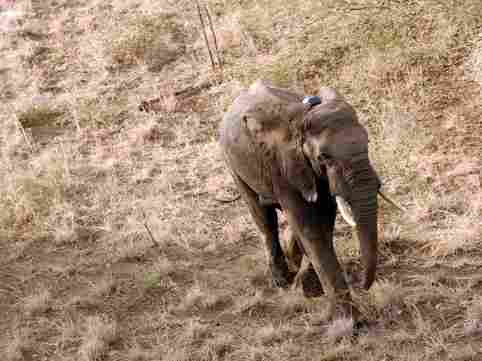 A small number of elephants are being tracked using radio collars to help South Sudan figure out how to protect the animals from poachers and development. Frank Langfitt/NPR hide caption 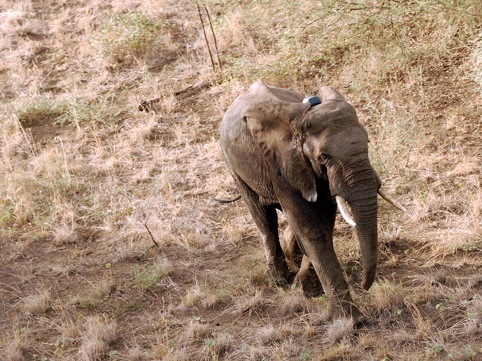 A small number of elephants are being tracked using radio collars to help South Sudan figure out how to protect the animals from poachers and development.

Wildlife filled South Sudan as recently as the early 1980s. Back then, Kolor Pino was a second lieutenant in the southern rebel army and fought in the bush.

Pino and his fellow soldiers didn't have much food, so they ate the animals by the thousands, including buffaloes, lions and hippopotamuses.

The war ended six years ago, although fighting continues to this day.

Pino, now a brigadier general, serves as game warden in South Sudan's Boma National Park, where he tries to protect the animals he once slaughtered.

To protect animals over such a vast expanse, South Sudan is relying on help from Paul Elkan and the Wildlife Conservation Society. Elkan and his team began surveying Boma and other parts of South Sudan four years ago as part of the first wildlife census in more than two decades. Flying across South Sudan in a single-engine Cessna, Elkan explains what happened during the civil war.

"Those species which were hit the worst were those that don't migrate," he says. "Species like buffalo, hartebeest — they got hammered."

While many animals died during the war, some migratory ones fled the fighting and hid out in swamps or remote areas.

On aerial surveys of the vast savanna, Elkan found that far more animals had survived than anyone thought. He says the surviving species include 800,000 white-eared kobs and 200,000 tiang — types of antelope — and an additional 300,000 Mongalla gazelles. At least an estimated 5,000 elephants also survived.

Elkan is putting radio collars on a small number of elephants to track their movements and help South Sudan figure out how to protect the animals from poachers and development.

But to collar an elephant, Elkan and his team have to track it down and hit it with a tranquillizer dart.

South Sudan Emerges As A Nation

Phil Mathews, a Kenyan pilot, flies Elkan and Mike Kock, a Wildlife Conservation Society veterinarian, out across the savanna one afternoon in search of elephants. Much of Sudan is arid desert, but the south is lush, especially in the rainy season. An emerald carpet of grass stretches to the horizon, dotted with scrub trees and occasional mountains.

With the help of a spotter plane, the team finds a herd of more than 100 elephants, half hidden amid groves of thorny acacia trees. Mathews brings the copter down low, just a few feet off the tree branches.

Kock, the vet, leans out the open door, strains against his chest harness and fires a dart at an elephant's rump.

"Dart's in," he says over the helicopter's radio system

Kock clicks his stop watch: He has maybe 40 minutes to do his job.

Within five minutes, the elephant is lying on its side, unconscious, in a bed of parched grass. The men leap out of the helicopter and go to work. Kock props open the elephant's nostrils with a stick and tapes a monitor to its eyelid to check vital signs.

The plane circles overhead, watching the elephant herd to make sure it doesn't return to charge the men. The elephant snores loudly and, momentarily, stirs.

Elkan is only partly joking. Elephants have trampled people doing this work. Sometimes, the pilot keeps the rotors spinning in case he has to lift off quickly to avoid a charging elephant.

Kock and Elkan thread a thick collar beneath the elephant's neck with a radio transmitter on top so they can track the herd, about 200 elephants in all.

The U.S. Agency for International Development is largely funding this project with $5 million. South Sudan is desperately poor and its fledgling economy is built entirely on oil. The program is designed to help this country-to-be protect the animals and eventually develop a tourism business around wildlife.

Elkan says collaring the elephants is crucial to saving them. 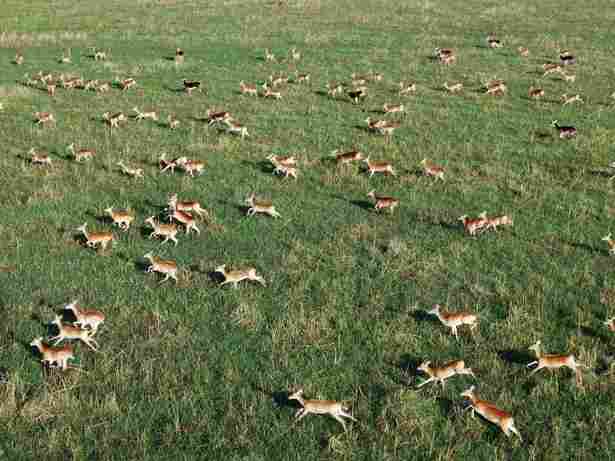 Conservationists feared most of South Sudan's wildlife had been killed during more than two decades of civil war, but a survey several years ago found many had survived, including hundreds of thousands of white-eared kobs. Frank Langfitt/NPR hide caption 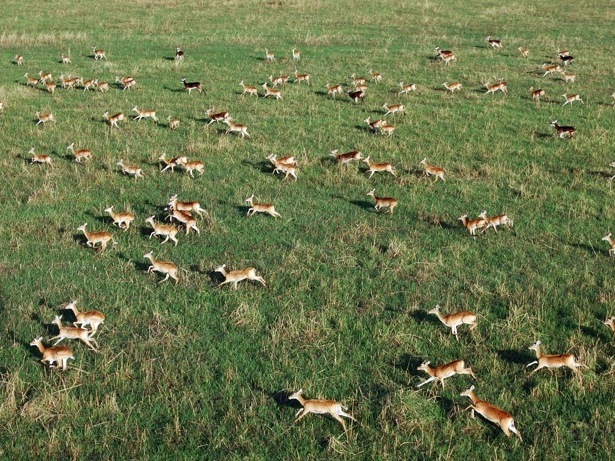 Conservationists feared most of South Sudan's wildlife had been killed during more than two decades of civil war, but a survey several years ago found many had survived, including hundreds of thousands of white-eared kobs.

"We want to know where they need to go and also to identify the threats to this group," says Elkan. "We can then orient anti-poaching efforts to protect them [and] also establish corridors for their movements."

With a radio collar now firmly around her neck, the elephant is ready to go.

Mathews, the pilot, starts the helicopter and Kock, the veterinarian, injects a reversal agent. Within two minutes, the elephant is back on her feet. Seemingly unfazed, she heads off in search of her herd.

After a second successful collaring later that afternoon, Mathews turns the helicopter around and begins the hourlong journey back to the Wildlife Conservation Society's bush camp.

As the sun begins to set, the team comes across a herd of kobs, thousands of them, bounding through open fields of lush, green grass. The helicopter flies alongside about 30 feet off the ground.

It's a stunning, hopeful sight in a land that has mostly known war.