Accessibility links
Spanish-Language Media Grows, Engages Communities With the nation's Hispanic population topping 50 million, media outlets are racing to court audiences from this key demographic. When the National Association of Hispanic Journalists meets today for its annual convention, chief among the agenda items will be the issue of reaching Hispanics through English and Spanish-language media. Guest host Allison Keyes discusses the current state of Hispanic media with Monica Lozano, a panelist at the convention and CEO of Impremedia, the country's largest Spanish-language newspaper company.

Yesterday, President Obama traveled to Puerto Rico to connect with locals, and some analysts say to also gain support from Puerto Ricans living and voting on the mainland U.S.

The U.S. Census Bureau says the Hispanic population now tops 50 million. With the growth of this demographic comes the growth of Spanish-language media. Networks like Univision and Telemundo are seeing much higher ratings than some listeners may expect. 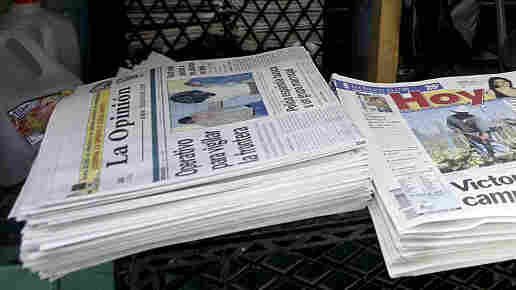 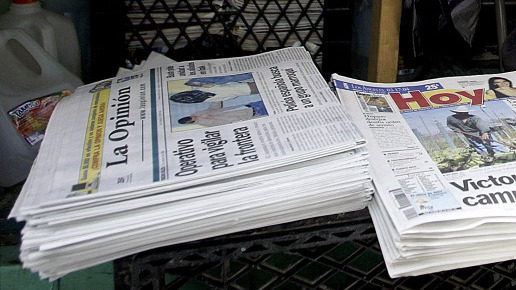 While traditional American newspapers are struggling, Spanish-language media is experiencing growth in circulation and competition.

The scope and influence of Hispanics are at issue during this week's 29th annual convention by the National Association of Hispanic Journalists (NAHJ). One of the event's speakers is Monica Lozano, CEO of ImpreMedia, which is America's largest Spanish-language newspaper company.

Lozano notes that when it comes to ratings and readership, English-language media has been declining while Spanish-language media has been growing. She explains that with the diversity among America's Hispanic community, there are many ways of reaching out to them. She says more media outlets have emerged, and they provide content that deeply connects to Hispanics' interests.

She notes that the digital divide is quickly disappearing as Latinos boast the fastest rate of social media usage. She says 60% of all Latinos are now online and 80% will be online in the next two years. Lozano sees an emergence of niche online communities that specifically relate to what Hispanics care about. That's in addition to the growth of large outlets like Univision and La Opinion.

But when it comes to English-language media, Lozano believes coverage of Hispanics is event-driven. She says these outlets look at dysfunctions like border violence — rather achievements like Hispanics' rapid rate of business startups.

Looking at the future, Lozano expects a greater reflection of the Latino community in English-language media. She also predicts the growth of customized platforms that connect to Latinos through both English and Spanish.