Accessibility links
Planned Execution Puts Mexico, Texas At Odds Mexican national Humberto Leal Jr., who was convicted of murder and sentenced to death in 1995, is slated to be executed in three weeks. But Mexico, which contends that Leal wasn't informed of his rights, is protesting the execution. 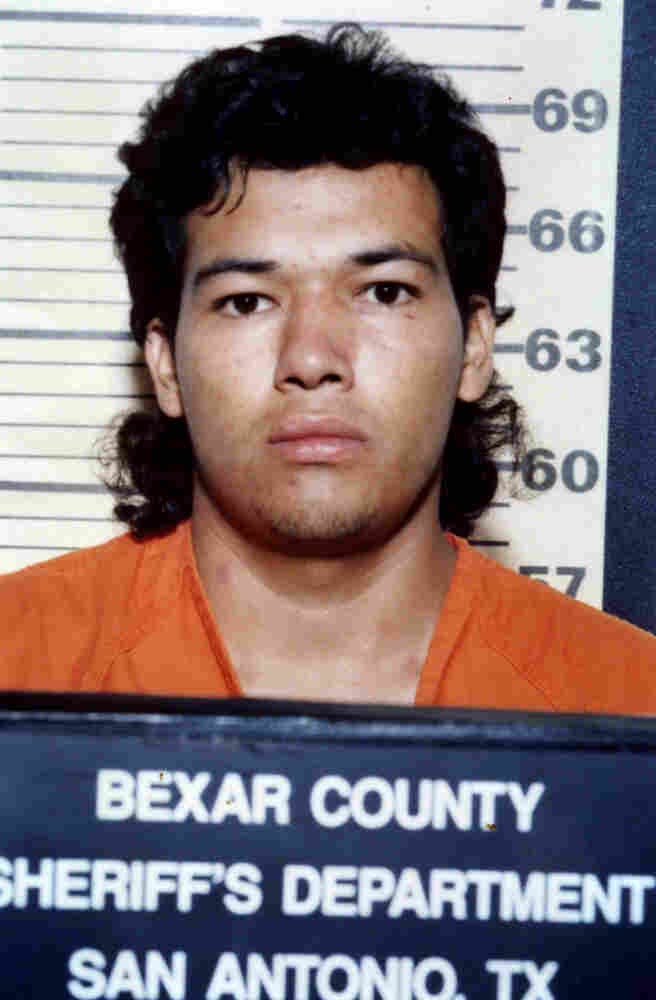 Humberto Leal Jr., a Mexican citizen, has been on death row since 1995 for the rape and bludgeoning of a 16-year-old San Antonio girl. He's slated to be executed in three weeks. But the Mexican government says he wasn't informed of his rights. Courtsey of San Antonio Express-News hide caption

A planned execution in Texas has the state at odds with the federal government and the International Court of Justice.

The dispute involves Humberto Leal Jr., a Mexican national who was convicted of murder and sentenced to death.

When he was arrested, Leal was not informed of his right to notify his embassy or consulate. Mexico cried foul, the International Court of Justice agreed, and the U.S. government asked Texas to review the case.

But the state has refused and plans to execute Leal in three weeks.

On the night of May 21, 1994, 16-year-old Adria Sauceda attended a party on the south side of San Antonio. Witnesses testified that the teenager ingested so much alcohol, cocaine and marijuana she became extremely intoxicated. A group of eight or nine young men took her into the backyard and took turns sexually assaulting her. Anyone who tried to intervene was told to back off.

Sandra Babcock, Leal's lawyer and a professor at Northwestern University Law School, says when Leal arrived at the party and learned what happened to Sauceda he "became very upset and said that he was going to take her home."

Leal says that on the ride home, Sauceda tried to get out of the car. Leal pulled over, she got out, he tried to get her back in, they argued, he pushed her and she hit her head. But Leal maintains he didn't kidnap her and he didn't rape her. And that's the crux of his defense because without those additional crimes, Leal would not have faced a capital murder charge and a death penalty conviction.

Babcock accuses the public defenders assigned to defend Leal of putting on a lazy defense. And that particularly galls the government of Mexico. All parties agree that Leal, a Mexican national in Texas legally, should have been told he had a right to notify his consulate in San Antonio. The Mexican government says had it known, it would have paid for Leal to have top-flight legal representation, investigators and experts to assist his defense.

"Mexico has a long-standing tradition — internationally recognized tradition — about assisting their nationals," says Victor Uribe, head of the legal section at the Mexican Embassy in Washington, D.C. "Of course, due to the opposition of Mexico to the death penalty, capital cases are a priority for Mexico."

'Texas Has Been Resistant In Complying'

Including Leal, there are 51 Mexican nationals on death row in the U.S. who were never informed of their rights. In frustration, Mexico took these cases to the International Court of Justice in The Hague. In 2004, the court ruled that the U.S. had violated its treaty obligations and ordered the U.S. to review these cases to see if the violation had prejudiced the men's defenses.

"It's not a favor that we do for foreigners who travel in the United States. The United States is a party to this treaty because it protects Americans when we travel abroad," says John Bellinger, a partner at Arnold & Porter in Washington. Bellinger is the former legal adviser at the State Department who handled these cases for the Bush administration.

To the surprise of both conservatives and liberals, President Bush was persuaded by this State Department's argument and ordered states to review their foreign national cases. But Texas Gov. Rick Perry said no, and to the Bush administration's chagrin, the Republican governor challenged his predecessor in federal court — and won.

"Texas has been particularly resistant to complying. I think Texas and the governor have tended to think this is a question of bowing to pressure from Washington or protecting the sovereignty of Texas from international tribunals in The Hague," Bellinger says.

Although Perry, the state attorney general's office and the Texas Board of Pardons and Paroles all declined to speak to NPR, Perry's staff in the past has said, "The world court has no standing in Texas and Texas is not bound by a ruling or edict from a foreign court. It's very important to remember that these individuals are on death row for killing our citizens."

Texas has already executed two Mexican nationals who weren't informed of their rights. Now Leal is on deck to be put to death the first week of July. Having witnessed the powerlessness of the International Court and the president of the United States to stop these executions, Uribe at the Mexican Embassy says they've appealed to the real power in all this: Perry.

"We are respectfully requesting him to exercise his legal power to suspend Mr. Leal's execution until his conviction and sentence are reviewed and reconsidered according to the decision of the ICJ," Uribe says.

Leal's time is running out. His best hope probably lies in federal court. His lawyer has filed a federal habeas petition asking the court to put Leal's execution on hold long enough to give Congress time to consider legislation that would order the states, including Texas, to comply. Democratic Sen. Patrick Leahy of Vermont introduced the legislation Tuesday.