Accessibility links
What The Arab Spring Means For Israel And Palestine The West Bank has yet to see a democracy movement on the level of those sparking dramatic changes in Egypt, Tunisia and Libya. It could have a huge effect on the region, were it to happen, says conflict resolution expert Robert Malley. 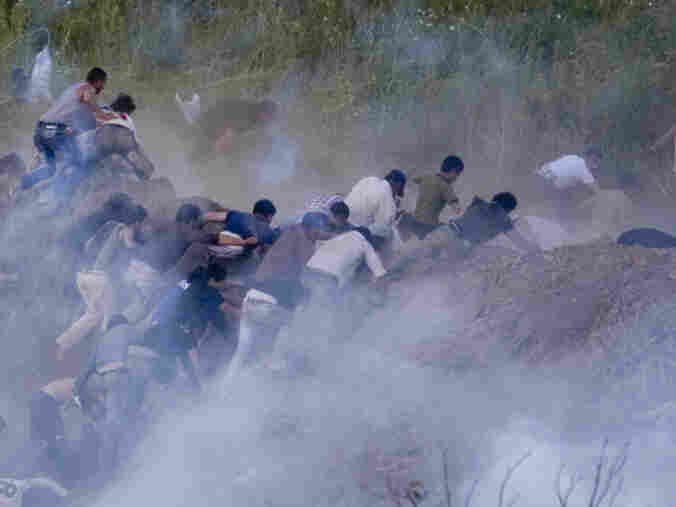 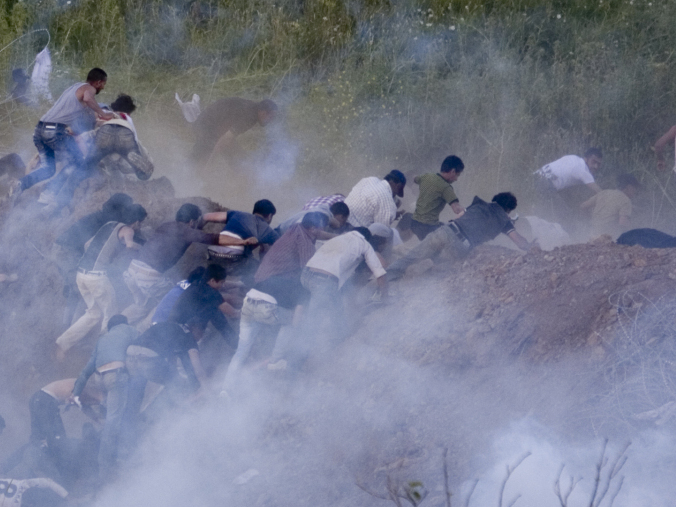 Democracy movements sweeping across the Middle East and North Africa have sparked dramatic changes in Egypt, Tunisia and Libya.

The West Bank has yet to see a movement on this level. If and when that does occur, it could be a "game changer" for Israel and the United States, says Robert Malley, an expert in conflict resolution and the program director for the Middle East and North Africa at the International Crisis Group.

On Thursday's Fresh Air, Malley joins Terry Gross for a wide-ranging conversation about the Middle East's future. He discusses his thoughts on the Palestinian push toward a U.N. resolution recognizing statehood, the attempts between Fatah and Hamas to form a unity government, and how the Arab Spring has affected — and will continue to affect — the Israeli-Palestinian relationship.

Can Protests Be Peaceful?

Last Sunday, pro-Palestinian protesters tried to storm the Syrian border, their second such attempt in three weeks. Malley says he thought the protest, which resulted in several casualities, was inspired by the events that have transpired during the Arab Spring.

"But there's also a sense that this is a different kind of conflict," he says. "You're not talking about overthrowing a leader. You're talking about resolving a half-century conflict. It's ultimately going to take negotiations to resolve that. But it's interesting that Palestinians — particularly young Palestinians — are trying to discover new forms of actions."

Malley says, however, that some Palestinian leaders have expressed to him their doubts that the protests will maintain their critical mass and remain peaceful.

"They also are afraid that it could turn out to be a protest against their own rules," he says. "That is why Palestinian leaders — whether they're from Fatah or Hamas — are fearful of these protests. Both of them have actually taken action to prevent the protests from growing because they fear, at some point, that it could get out of control and the target would no longer be Israel's occupation, but also the rule under which [Palestinians] are subjected to — both in the West Bank and Gaza."

Leaders in the Palestinian Authority are currently debating whether to introduce a measure to the United Nations in September that would ask the international body to include it as a member state.

It's largely a symbolic gesture — one that wouldn't change the situation in the West Bank, or change current borders, Malley says.

"In order to get membership in the U.N., you need to get a vote at the Security Council, and the United States is determined to veto such a resolution," Malley says. "So membership in the U.N. ... is not going to happen. I think their second best solution would be to get a resolution in which a number of countries would express their recognition of the Palestinian state and its borders of 1967."

Israeli Prime Minister Benjamin Netanyahu has made it clear that he rejects those borders and has said Israel's security requires different borders. If the resolution passed, Israel would be occupying land — some of which it plans to keep in any negotiated solution to the conflict — belonging to another member of the United Nations.

"One has to look at it not as what the vote will do, because it won't do much, but rather as a symptom of despair on the Palestinian side that this conflict will ever end and [they'll have] sovereignty and independence," he says. "This despair is shared by the Israelis. If you're an Israeli and you've lived through the past several decades, you have a right to question whether peace will ever come, and look at it and wonder if the Palestinians will ever seize the opportunity. There are two narratives here about who's responsible for the deadlock — but the reality is that both sides today believe that the other side is not prepared to make peace, and that leads to actions such as the resort to the United Nations, which goes against everything that the current Palestinian leadership stands for." 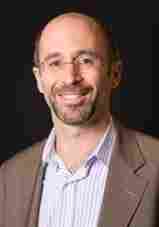 Robert Malley is a lawyer and conflict resolution specialist. From 1998 to 2001, he was the special assistant to President Bill Clinton for Arab-Israeli Affairs. During that time, he helped organize the 2000 Camp David Summit. International Crisis Group hide caption

On what Palestinians think of other uprisings

"For the first time in many decades, the Palestinians are viewing other countries and other people rising up, and they [have] remained relatively quiescent for some time. There's a sense that they, too, want to join this movement, and they, too — and I think this is critical — are learning the advantages of nonviolent popular protests. When Palestinians have risen up in the past, it's taken the form of acts of violence [and acts of terrorism] against other civilians. I think they're learning ... that there are other ways of acting that don't involve violence."

On the youth movement

"There's a youth movement. There are people who are tired of what's happened, they're tired of the past 20 years — and it's been a dual failure. It's been a failure of diplomacy and negotiations on the one hand. It's been 20 years since the Oslo agreements were signed, and the Palestinians still don't have their independence or their state. And it's been a failure of the resistance strategy — the violence strategy — which has been promoted by some. So you have young people who are looking and saying, 'Neither of the ways forward that our leaders have promoted has gotten us anywhere closer to where we want to be. Our living conditions are not particularly good. We're still under occupation. We still are divided between Gaza and the West Bank. So it's time for something new.' "

On Hamas' refusal to recognize Israel

"I think Hamas would come under pressure. If there were serious negotiations that were about to take place and Hamas objected to them or tried to block them — which it hasn't said it would do — but it would have to be put to the test. I have no sympathy for a number of their positions, but I think they have to be put to the test. And I think the broader point is this: When I was a young student, my field of study was national liberation movements in the Third World. And one thing I've learned from that is that a divided movement isn't good for the movement itself. It isn't good for the party with which it's negotiating. You can't speak for your people, make binding commitments [or] implement agreements if you're divided, if you only speak for part of your population. So the division of the Palestinian movement, which I think was a real setback for the Palestinians themselves, is not very good news for Israel, either."

On creating a new paradigm for negotiations

"[Palestinians and Israelis] were brought to the table a few times in the last two years, and the outcome was greater distrust, not less distrust, and further setbacks. So one thing that worries me now — we spoke about the U.N. resolution and how much the U.S. wants to avoid it coming to a vote — and one of the things we're hearing is they want to get the parties back to the negotiating table because that's a surefire way to make sure people ignore the U.N. and don't go to the U.N. But that's buying yourself a much bigger problem in order to get rid of a smaller one, because if you have negotiations at this stage of the game — and I hope I'm wrong; I've made enough wrong predictions over the Arab Spring that maybe I'm wrong on this too — but my conviction is that President Abbas and Prime Minister Netanyahu cannot reach a deal for so many reasons, not just personal outlooks but politics on both sides. And ultimately this is about politics and political decisions. So you bring them to the table and therefore you overcome the problem of September and the vote at the U.N., and you buy yourself this massive headache because what do you do when the negotiations collapse as I suspect they will?"