Accessibility links
Republican Group Targets Its Own Party The fiscally conservative Club for Growth has spent a decade waging war on moderate Republicans. With its views now in the GOP mainstream, it could wield more influence than ever.

Republican Group Targets Its Own Party

Republican Group Targets Its Own Party

It wasn't long ago that the conservative, free-market Club for Growth was viewed by a swath of Republicans as a furtive, well-heeled enemy whose efforts to purge moderates from the GOP had to be thwarted. 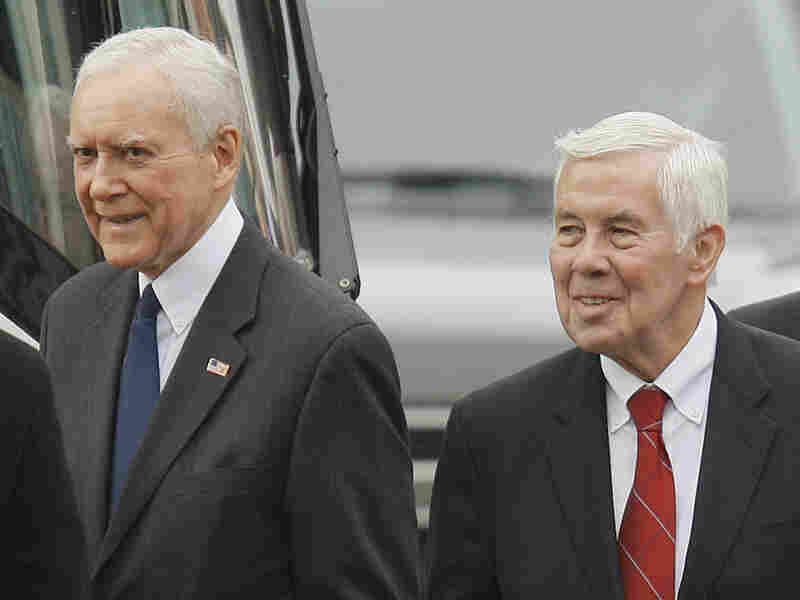 Sens. Orrin Hatch (R-UT, left) and Richard Lugar (R-IN) have been targeted by the Club for Growth for not being fiscally conservative enough in their politics. Stephan Savoia/AP hide caption 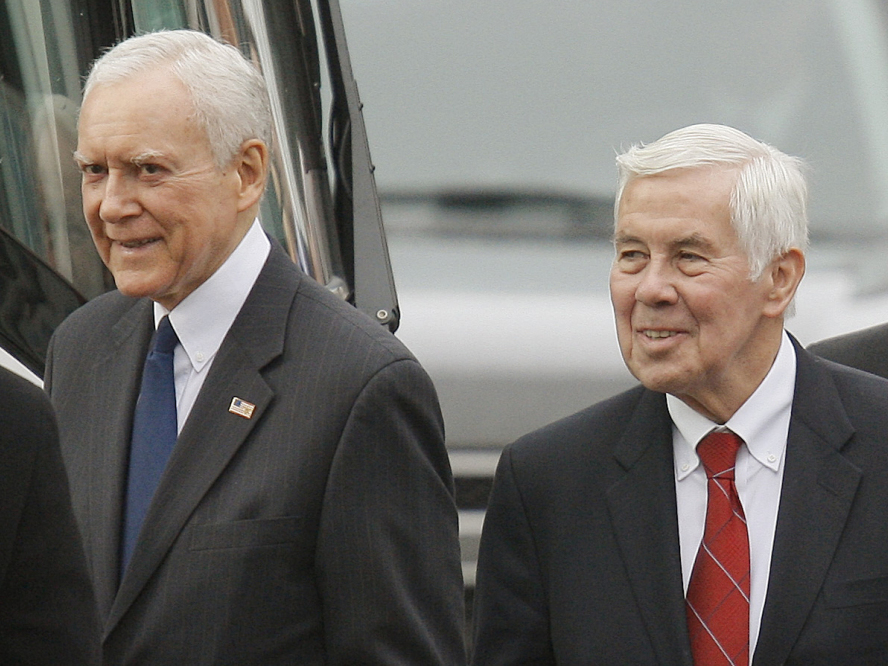 Sens. Orrin Hatch (R-UT, left) and Richard Lugar (R-IN) have been targeted by the Club for Growth for not being fiscally conservative enough in their politics.

The club and its agenda are "not representative of the Republican Party," the director of the Republican Main Street Partnership, a group of moderate GOP congressional members, once said, adding: "We raise money on a daily basis to defeat them."

When asked this week about the Republican animus the group faced in the recent past, Club for Growth executive director David Keating replied: "That sounds so yesterday, doesn't it?"

Its powerful influence can be seen in the ongoing and bitter partisan standoff on Capitol Hill over budgets, spending, debt ceiling and entitlement programs.

They might seem conservative, but to the Club for Growth, they're Republicans In Name Only (RINO). Politicians in the club's sights this year:

Club President Chris Chocola has called for the six-term senator to retire rather than seek re-election in 2012. Lugar has brushed off the club's pressure. He faces a primary challenge from state Treasurer Richard Mourdock, who has met with club officials and has early Tea Party support.

The club has urged Utah Rep. Jason Chaffetz to challenge the six-term senator in a primary. Unlike Lugar, Hatch has responded by essentially ending his bipartisan efforts on immigration reform. He has also apologized for supporting the Wall Street bailout.

After Thompson expressed interest in running for the U.S. Senate, the club attacked him as a "big-government, pro-tax Republican whose time has come and gone." Thompson, who was health and human services secretary under George W. Bush, has dismissed the criticism and defended his early work on a bipartisan health care bill.

Snowe, one of the few GOP moderates remaining in the Senate, has long been a club target. She already has two potential Tea Party-affiliated primary challengers in 2012. Democrats have been interested in persuading Snowe to switch parties.

The club, which has spent a decade waging expensive primary and ad wars on "RINOs" — Republicans in Name Only — has also inserted itself in 2012 contests.

The few remaining Capitol Hill Republicans who may be conservative, but not by exacting club standards (see: Utah Sen. Orrin Hatch and Indiana Sen. Richard Lugar), have been targeted. And, in candidate "white papers," the organization, which relies on funds from generous Wall Street investors, has begun picking apart a GOP presidential field that it finds lacking.

Mitt Romney has "developed an unshakable reputation as a flip-flopper." Newt Gingrich "shows a troubling willingness to use federal power to coerce taxpayers into his preferred direction." Tim Pawlenty is "hard to pin down on his exact ideological moorings."

"We'd love to see someone wonderful get into the race," says Keating, among many club members who wanted Indiana Rep . Mike Pence to run. Pence instead decided to campaign for governor.

In the 2010 midterm elections, the Club for Growth "spent $8 million and had a phenomenal record," says Craig Holman, government affairs lobbyist for Public Citizen, a nonprofit, Washington-based consumer advocacy group.

The club capitalized on — and some say co-opted — Tea Party fervor in races including the U.S. Senate contest in Nevada, where they backed Tea Party favorite Sharron Angle in a primary battle with a more mainstream GOP opponent.

Angle eventually lost to Democratic Sen. Harry Reid, the Senate majority leader. Reid had been considered the most vulnerable Senate incumbent — that is, until Angle became the GOP nominee.

It was a rare loss for the club.

"They endorsed 26 candidates in 2010 primary elections, and lost two," Holman said of the club. "It's a huge change from 10 years ago."

In those intervening years, Holman says, the organization and its money have played a significant role in driving moderate Republicans from office and replacing them with "very ideologically conservative party members."

For that, it has drawn the enmity of Republicans who would prefer a more "big tent" approach to party building.

GOP Sen. John McCain of Arizona is among those who said the club cost Republicans a majority in the U.S. Senate when it helped finance a debilitating primary challenge to moderate Sen. Lincoln Chafee (R-RI) in 2005.

The group went after 2008 GOP presidential candidate Mike Huckabee, a former Arkansas governor, who has repeatedly referred to Keating's organization as the "Club for Greed."

This year it has launched pre-emptive strikes against other moderate Republicans testing the political waters, including former Wisconsin Gov. Tommy Thompson, who had expressed interest in running for the Senate.

When now-former Sen. Arlen Specter of Pennsylvania, a perennial club target, announced he was leaving the Republican Party to become a Democrat in 2009, he called for a GOP "rebellion" against the organization for its outsize influence on the party.

Specter then lost his re-election bid in a Democratic primary. The man who eventually won his seat? Former Club for Growth President Pat Toomey.

A Grip on Party Ideology

The club has emerged from its battles more powerful than ever. "They are enormously influential," says Sheila Krumholz of the Center for Responsive Politics, which tracks campaign and special interest spending.

In terms of money alone, the club has been dwarfed by Karl Rove's conservative American Crossroads, which raised $21.55 million in independent expenditures in the 2010 election cycle. Its affiliate, Crossroads Grassroots Policy Strategies, raised an additional $16 million in the same period.

The Crossroads groups, however, have a different mission, Keating says, staying out of primaries where the club wields most of its influence, and focusing on simply electing Republicans.

The continued threat of a well-financed primary challenge, and its influential annual ranking of lawmakers based on their votes on economic matters, guarantee the club's grip on party ideology.

"On their issues, they are one of the top echelon movers and shakers on the fiscal right," Krumholz says. "They've set up a broad network of wealthy individuals who are largely retired fiscal conservatives."

With new campaign finance rules that allow direct corporate giving, "they are pulling out all the stops" with new PACs and organizations, giving them — and others — "maximum flexibility to raise money."

The group's success has imposed a discipline on the GOP congressional caucus that has silenced critics of the past.

Sarah Chamberlain Resnick, who, as director of the moderate Republican Main Street Partnership in 2004 sought to defeat the club, says that the two organizations have now "come to an understanding."

The relationship has matured over time, she says, and, with shared interest in fiscal conservatism, they have agreed to coexist.

Some would suggest the fight is over because, for now, anyway, one side has prevailed.

"The club and its members' views," Keating says, "have become totally mainstream in the Republican caucus."