Accessibility links
The Nation: Keeping The Right To Die Alive Today, the US Conference of Catholic Bishops will release a proposal calling to end laws that make it legal to end one's life. Ann Neumann of The Nation says action should be taken so that the Catholic Church can't influence what government allows people to due with their bodies. 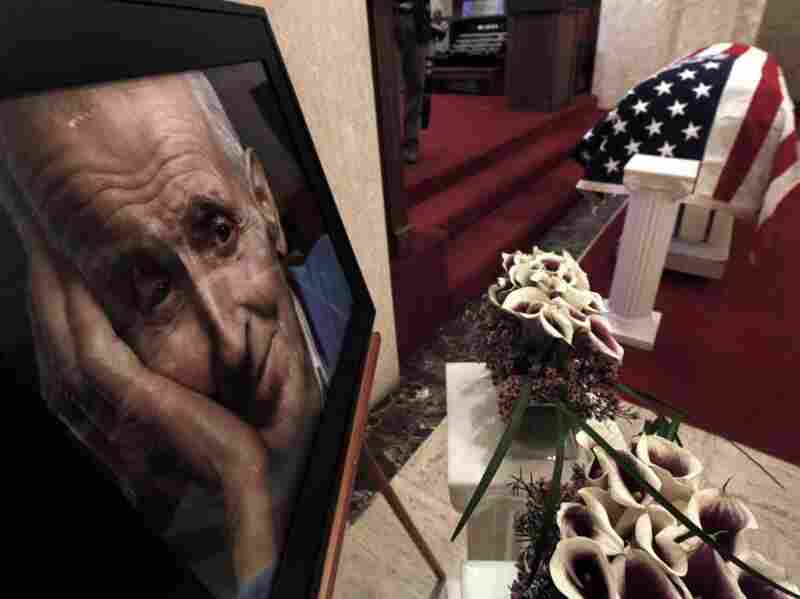 A photo of Dr. Jack Kevorkian is shown next to his casket after a public memorial service in Troy, Mich. on June 10. Kevorkian, who died on June 3, was an advocate of assisting the gravely-ill in dying and claimed he assisted in about 130 deaths. He spent eight years in prison for second-degree murder after 60 Minutes broadcast video of him helping someone die in 1998. Paul Sancya/AP hide caption 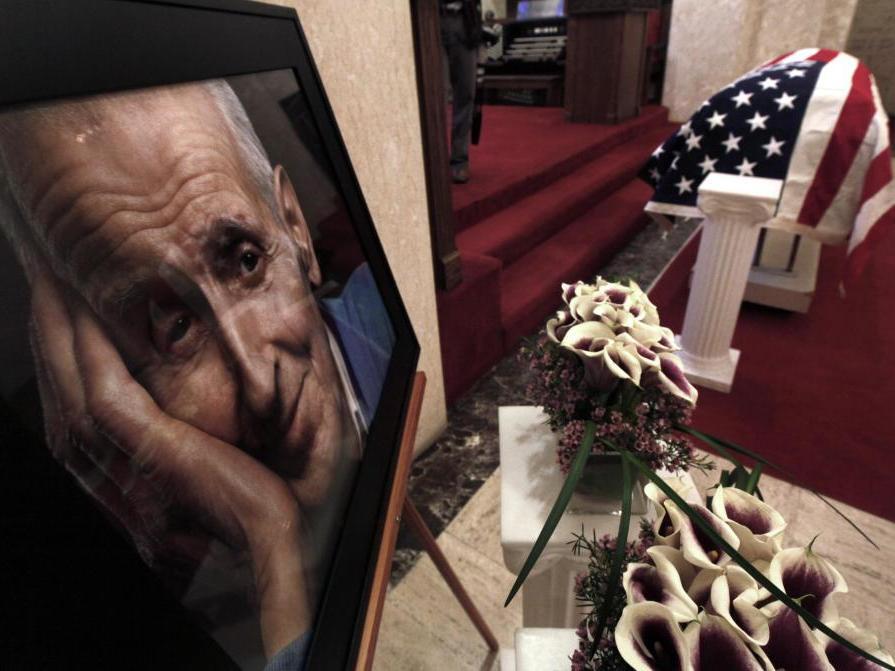 A photo of Dr. Jack Kevorkian is shown next to his casket after a public memorial service in Troy, Mich. on June 10. Kevorkian, who died on June 3, was an advocate of assisting the gravely-ill in dying and claimed he assisted in about 130 deaths. He spent eight years in prison for second-degree murder after 60 Minutes broadcast video of him helping someone die in 1998.

Ann Neumann, a hospice volunteer, writes about religion and end of life..

On Thursday the US Conference of Catholic Bishops (USCCB) will release a new document that calls for the end of legal aid in dying. To Live Each Day with Dignity marks a nationwide effort by the Roman Catholic Church to influence how patients will be cared for at the end of their lives. Citing a Death with Dignity bill that passed in Washington in 2008, a ruling protecting the right to aid in dying by the Montana supreme court in 2009 and a spate of state initiatives, a June 1 press release states, "The Church needs to respond in a timely and visible way to this renewed challenge, which will surely be pursued in a number of states in the years to come."

Barbara Coombs Lee, president of the nation's largest aid in dying advocacy group, Compassion & Choices, wrote in an e-mail to supporters last week, "What alarms us is their determination to use their standing to undermine end-of-life choice and chastise everyone — Catholic or otherwise — who believes in or practices it." Though the Catholic Church's position is not new — opposition to "euthanasia" has been a cornerstone of the "prolife" platform for decades — the elevation of end-of-life issues to the top of the bishops' agenda this week is affirmation of their commitment to this aspect of healthcare. And it's not hard to imagine that the USCCB is specifically rebuking Compassion & Choices for their successes: the press release highlights true compassion and choice; To Live Each Day will be released at the USCCB's Spring General Assembly in Seattle, Washington.

But much more than the legality of aid in dying — commonly known as assisted suicide, which misrepresents the practice, limited as it is to patients with a terminal illness — is at stake. Even if, as Richard Doerflinger, associate director of the USCCB's Secretariat of Pro-Life Activities, contends, Thursday's document is a moral statement and not a kick-off to a political campaign to end legal aid in dying, it will serve as marching orders in the coming years for already-mobilized and funded "prolife "activists — whether Catholic, evangelical, Mormon or unaffiliated — who will use it to determine how they vote and organize. That means, as veterans on the abortion rights front will tell you, a heightened assault on end-of-life rights. They'll also tell you that failing to see the larger implications of the church's domination of life and death discussions leads to an erosion of patients' rights, rights that, when lost, are seldom regained.

Under pressure from the Catholic Church and its affiliates, rights of patients across the board could be weakened. From efficacy of advanced directives and living wills (documents used to state patients' healthcare wishes), to medical proxy laws (that appoint patient guardians), from hospice and palliative funding and regulation, to drug regulation, to laws that govern hospitals, hospital workers and home healthcare aids. But also at stake are the laws that govern inheritance rights, death certificate parameters and legality regarding suicide (which assisted suicide is often equated with). The list goes on.

A focus on aid in dying should illuminate failures in end of life care, of which the US has many. In our current state of crisis — 52 million people are uninsured; the United States spends twice as much on healthcare than other developed nations, with inferior results; the population is growing older; the dying are often subject to debilitating futile care in their last days — we can hardly afford ideological diversion. As with the issue of abortion, when the Catholic Church shines a spotlight, Americans get blinding orders, not illumination.

Even typically astute writers miss the point on end-of life care. While Ezra Klein, the Washington Post's healthcare expert, didn't endorse Catholic pundit Ross Douthat's contention that aid in dying should be illegal (though Klein failed to acknowledge that it is legal in three states), he bought the same "slippery slope" argument "pro-life" groups have used for years to oppose and restrict abortion. While Mother Jones's Kevin Drum refuted Douthat's religious arguments and Klein's sources and logic, he too failed to connect the conversation on assisted suicide to the larger crisis in end-of-life care. Neither took meaningful issue with the outsized role the Catholic Church — which operates one-fifth of all hospital beds in the United States according to their own guidelines — plays in this or the healthcare debate.

As Americans face a political, economic and personal crisis over healthcare, we must take the opportunities — like last week's death of Dr. Jack Kevorkian and this week's statement by the USCCB — to have meaningful national conversations about who decides what we do with our bodies and what the ramifications of the church's involvement can mean.

I asked Doerflinger, Is it immoral to end a dying life? Even if it is one's own?

"If what?" he asked from a cell phone in Seattle.